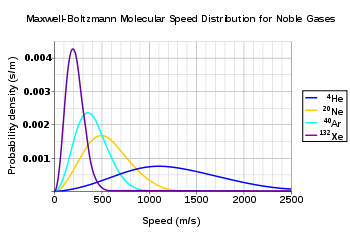 A chart displaying the speed probability density functions of the speeds of a few noble gases at a temperature of 298.15 K (25 C). An explanation of the y-axis label appears on the image page (click to see). Similar speed distributions are obtained for neutrons upon moderation.

Moderated and other, non-thermal neutron energy distributions or ranges are listed in the table below:

A fast neutron is a free neutron with a kinetic energy level close to 1 MeV (100 TJ/kg), hence a speed of 14,000 km/s. They are named fast neutrons to distinguish them from lower-energy thermal neutrons, and high-energy neutrons produced in cosmic showers or accelerators. Fast neutrons are produced by nuclear processes such as nuclear fission.

Neutrons from fusion reactions are usually considerably more energetic than 1 MeV; the extreme case is deuterium-tritium fusion which produces 14.1 MeV neutrons (1400 TJ/kg, moving at 52,000 km/s, 17.3% of the speed of light) that can easily fission uranium-238 and other non-fissile actinides.

Fast neutrons can be made into thermal neutrons via a process called moderation. This is done with a neutron moderator. In reactors, typically heavy water, light water, or graphite are used to moderate neutrons.

After a number of collisions with nuclei (scattering) in a medium (neutron moderator) at this temperature, neutrons arrive at about this energy level, provided that they are not absorbed.

Thermal neutrons have a different and often much larger effective neutron absorption cross-section for a given nuclide than fast neutrons, and can therefore often be absorbed more easily by an atomic nucleus, creating a heavier - and often unstable - isotope of the chemical element as a result (neutron activation).

Most fission reactors are thermal reactors that use a neutron moderator to slow down, or thermalize the neutrons produced by nuclear fission. Moderation substantially increases the fission cross section for fissile nuclei such as uranium-235 or plutonium-239. In addition, uranium-238 also has a much lower capture cross section for thermal neutrons, allowing more neutrons to cause fission of fissile nuclei and continue the chain reaction, rather than being captured by 238U. The combination of these effects allows light water reactors to use low-enriched uranium. Heavy water reactors and graphite-moderated reactors can even use natural uranium as these moderators have much lower neutron capture cross sections than light water.[2]

An increase in fuel temperature also raises U-238's thermal neutron absorption by Doppler broadening, providing negative feedback to help control the reactor. Also, when the moderator is also a circulating coolant (light water or heavy water), boiling of the coolant will reduce the moderator density and provide negative feedback (a negative void coefficient).

Fast reactors use unmoderated fast neutrons to sustain the reaction and require the fuel to contain a higher concentration of fissile material relative to fertile material U-238. However, fast neutrons have a better fission/capture ratio for many nuclides, and each fast fission releases a larger number of neutrons, so a fast breeder reactor can potentially "breed" more fissile fuel than it consumes.

Fast reactor control cannot depend solely on Doppler broadening or on negative void coefficient from a moderator. However, thermal expansion of the fuel itself can provide quick negative feedback. Perennially expected to be the wave of the future, fast reactor development has been nearly dormant with only a handful of reactors built in the decades since the Chernobyl accident (and because of low prices in the uranium market)-- although there is now a revival with several Asian countries planning to complete larger prototype fast reactors in the next few years.