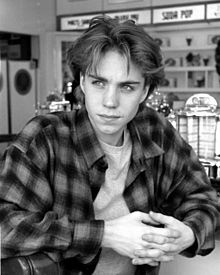 Curtained hair is the term given to the hairstyle featuring a long fringe divided in either a middle parting or a side parting. When used, it generally applies to males. This haircut was popular in Europe and North America throughout the 1990s and briefly in the early 2000s.

It is unsure when this style became fashionable in the Far East, but evidence of it in Japanese media can be seen from before the 1990s. Many anime characters, such as Dragonball Z's Trunks and Fullmetal Alchemist's Edward Elric have this haircut.

The haircut is featured on many video game characters, such as Resident Evil's Leon S. Kennedy, Legacy of Kain's Raziel and Onimusha's Samanosuke Akechi. Gambit and Nightcrawler in Wolverine and the X-Men had this hairstyle. Animated films

The hair style has been often featured in animated films. Characters who had it include; Dimitri from Anastasia (1997), David Kawena from Lilo & Stitch (2002), Jim Hawkins from Walt Disney's Treasure Planet (2002), Milo James Thatch from Atlantis: The Lost Empire (2001), Cale Tucker from Titan A.E. (2000) and Gary Johnston from Team America: World Police (2004).