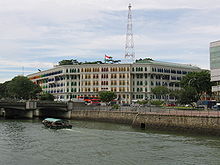 The Old Hill Street Police Station building currently houses the Ministry of Information, Communications and the Arts (MICA) of the Singapore Government. 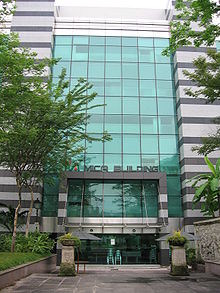 Additions and alterations were carried out on the Old Hill Street Police Station for the building to house MICA, while preserving the building's exterior façade.

The Old Hill Street Police Station (Chinese: 旧禧街警察局) is a historic building in Singapore, and is located at Hill Street in the Museum Planning Area, within the Central Area, Singapore's central business district.

Between 1845 and 1856, the Assembly Rooms — a space for public functions and a building that housed a theatre and a school — occupied the current site of the Old Hill Street Police Station.

The Old Hill Street Police Station building is the site of Singapore's first jail. Following a meeting of soldiers in the Alexandra Barracks in 1915, the Singapore Police Force was reorganised. As a result of the reorganisation, from 1915 to 1935, the Singapore Police Force built several police stations to deal with increasing Chinese secret society activities. To provide vehicular access behind the building, the steep slopes of Fort Canning had to be cut back and shored up. In 1934, the Hill Street Police Station and Barracks was opened by Director of Public Works and Adviser for Malay States, G. Sturrock, who was also a Fellow of the Royal Institute of British Architects (FRIBA). In addition to the standard facilities for a police station, there were living quarters for policemen and their families.

During the Japanese Occupation, Hill Street Police Station was used by the Kempeitai as a holding area for prisoners and some say, as torture chambers. After the war, it reverted to being a police station. The Arms and Explosives Branch of the Police Department operated there from 1949 to 1981.

In the 1960s, a new housing scheme gave police personnel the option to live in government-built accommodation. Police staff gradually moved out, with the last occupant leaving in 1979. Two years later, the station was closed and, after renovations, the building was renamed Hill Street Building in 1983. It housed the Official Consignee, the Official Trustees, Public Receiver and the Archives and Oral History Department (now the National Archives) and other government departments.

Today, it is used by the Ministry of Information, Communications and the Arts (MICA) and other associated departments and statutory boards, including the National Arts Council, the National Heritage Board and the Media Development Authority.

The Old Hill Street Police Station building was gazetted as a national monument on 18 December 1998. 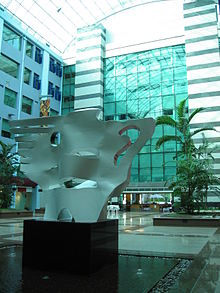 The Old Hill Street Police Station was built in Neo-Classical style which was still fashionable for public buildings in England in the 1930s. The building was designed by the Public Works Department when F. Dorrington Ward was the Government Architect.

The six-storey building has a thoroughly Italianate air with its corbelled loggias and balconies, arcades, stuccoed, rusticated surfaces and central courtyards, one large and one small. Because of the building's height, the proportions of these internal spaces are somewhat overwhelming but, as a solution to the problems of the Singapore climate, this is a sensible idea.

The building was considered amongst the finest in the world. Modern for its time, it had electric lifts by 1933. Upon its completion in 1934, it was the largest pre-war government building in Singapore and regarded as a modern skyscraper. The building has a total of 911 windows with colourful shutters.

The main courtyard, the former police parade grounds, has been converted into an air-conditioned atrium, called The ARTrium for art activities. The spacious ARTrium, with its vibrant colours and ample space, regularly features artistic performances and also houses art galleries.

Since the building was erected, it has been said to have bad feng shui by the Chinese people. The traders enjoyed prosperous trading until then because of the shape in the area which resembled the peh toh, the Chinese New Year fish which was symbolic for good fortune.