The Autonomous Region in Muslim Mindanao (abbreviated ARMM) is the region, located in the Mindanao island group of the Philippines, that is composed of predominantly Muslim provinces, namely: Basilan (except Isabela City), Lanao del Sur, Maguindanao, Sulu and Tawi-Tawi. It is the only region that has its own government. The regional capital is at Cotabato City, although this city is outside of its jurisdiction.

The ARMM previously included the province of Shariff Kabunsuan until July 16, 2008, when Shariff Kabunsuan ceased to exist as a province after the Supreme Court in Sema v. Comelec declared unconstitutional the "Muslim Mindanao Autonomy Act 201", which created it.[1]

The ARMM spans two geographical areas: the Mindanao mainland, where Lanao del Sur and Maguindanao are situated, and the Sulu Archipelago, made up of the island provinces of Basilan, Sulu and Tawi-Tawi. The region covers a total of 12,288 km².[2]

Political map of the Autonomous Region in Muslim Mindanao 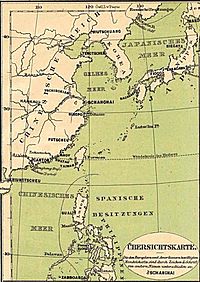 For the most part of the Philippines' history, the region and most of Mindanao has been a separate territory, which enabled it to develop its own culture and identity. The region has been the traditional homeland of Muslim Filipinos since the 15th century, even before the arrival of the Spanish who colonized most of the Philippines beginning 1565. Muslim missionaries arrived in Tawi-Tawi in 1380 and started the conversion of the native population into Islam. In 1457, the Sultanate of Sulu was founded and not long after were the sultanates of Maguindanao and Buayan established. At the time when most of the Philippines was under Spanish rule, these sultanates maintained their independence and regularly challenged Spanish domination of the Philippines by conducting raids on Spanish coastal towns in the north and repulsing repeated Spanish incursions in their territory. It was not until the last quarter of the 19th century that the Sultanate of Sulu formally recognized Spanish sovereignty, however these areas remained loosely controlled by the Spanish as sovereignty was only limited to military stations and garrisons and pockets of civilian settlements in Zamboanga and Cotabato,[3] until they had to abandon the region as a consequence of their defeat in the Spanish-American War.

In 1942, during the early stages of Pacific War (a theater of the Second World War), troops of the Japanese Imperial Forces invaded and overran Mindanao and the ARMM. 3 years later, in 1945, combined United States and the Philippine Commonwealth Army troops liberated in Mindanao, and, with the help of local guerrilla units, ultimately defeated the Japanese forces occupying the region.

In 1970s, escalating hostilities between government forces and the Moro National Liberation Front prompted Ferdinand Marcos to issue a proclamation forming an Autonomous Region in the Southern Philippines, which was however, turned down by a plebiscite. In 1979, Batas Pambansa No. 20 created the Regional Autonomous Government in Western and Central Mindanao regions.[4]

Establishment of the ARMM

The Autonomous Region of Muslim Mindanao region was first created on August 1, 1989 through Republic Act No. 6734 (otherwise known as the Organic Act) in pursuance with a constitutional mandate to provide for an autonomous area in Muslim Mindanao. A plebiscite was held in the provinces of Basilan, Cotabato, Davao del Sur, Lanao del Norte, Lanao del Sur, Maguindanao, Palawan, South Cotabato, Sultan Kudarat, Sulu, Tawi-Tawi, Zamboanga del Norte and Zamboanga del Sur; and in the cities of Cotabato, Dapitan, Dipolog, General Santos, Koronadal, Iligan, Marawi, Pagadian, Puerto Princesa and Zamboanga to determine if their residents would want to be part of the ARMM. Of these areas, only four provinces - Lanao del Sur, Maguindanao, Sulu and Tawi-Tawi - voted favorably for inclusion in the new autonomous region. The ARMM was officially inaugurated on November 6, 1990 in Cotabato City, which was designated as its provisional capital.

Prelude to Memorandum of Agreement on Ancestral Domain

In 2001 a new law, Republic A 9054, was passed for the expansion of the ARMM. In a plebiscite, Marawi City (situated within Lanao del Sur) and the province of Basilan (excluding Isabela City) opted to be integrated into the region.[5] RA 9054 lapsed into law, without the signature of President Gloria Macapagal-Arroyo[clarification needed].

On July 18, 2008, Hermogenes Esperon, "peace advisor" to Philippine President Gloria Macapagal-Arroyo, announced a further expansion of the ARMM in line with an agreement reached between the Philippine government and the Moro Islamic Liberation Front. The deal, concluded after nearly six years of dialogue, gives the ARMM control of an additional 712 villages on the island of Mindanao, as well as far-reaching political and economic powers.[6]

Finally, on October 14, 2008, the Supreme Court of the Philippines, by a highly divided vote of 8–7, declared “contrary to law and the Constitution” the Ancestral Domain Aspect (MOA-AD) of the Tripoli Agreement on Peace of 2001 between the Government of the Republic of the Philippines (GRP) and the Moro Islamic Liberation Front (MILF).[9][10] The 89-page decision, written by Associate Justice Conchita Carpio-Morales ruled: “In sum, the Presidential Adviser on the Peace Process committed grave abuse of discretion when he failed to carry out the pertinent consultation process, as mandated by EO No. 3, RA 7160, and RA 8371. The furtive process by which the MOA-AD was designed and crafted runs contrary to and in excess of the legal authority, and amounts to a whimsical, capricious, oppressive, arbitrary and despotic exercise thereof. It illustrates a gross evasion of positive duty and a virtual refusal to perform the duty enjoined.”[11][broken citation] [12][13]

The Comelec ruled that the Supreme Court’s ruling has no effect on the ARMM elections as the decision is not yet final.[clarification needed][citation needed]

The region is headed by a Regional Governor. The Regional Governor and Regional Vice Governor are elected directly like regular local executives. Regional ordinances are created by the Regional Assembly, composed of Assemblymen, also elected by direct vote. Regional elections are usually held one year after general elections (national and local) depending on what legislation from the Philippine Congress. Regional officials have a fixed term of three years, which can be extended by an act of Congress.

The Regional Governor is the chief executive of the regional government, and is assisted by a cabinet not exceeding 10 members. He appoints the members of the cabinet, subject to confirmation by the Regional Legislative Assembly. He has control of all the regional executive commissions, agencies, boards, bureaus and offices.

The ARMM has a unicameral Regional Legislative Assembly headed by a Speaker. It is composed of three members for every congressional district. The current membership is 24, where 6 are from Lanao del Sur including Marawi City, 6 from Maguindanao, 6 from Sulu, 3 from Basilan and 3 from Tawi-Tawi.

The Regional Legislative Assembly is the legislative branch of the ARMM government. The regular members (3 members/district) and sectoral representatives, have 3-year terms; maximum of 3 consecutive terms. It exercises legislative power in the autonomous region, except on the following matters: foreign affairs, national defense and security, postal service, coinage and fiscal and monetary policies, administration of justice, quarantine, customs and tariff, citizenship, naturalization, immigration and deportation, general auditing, national elections, maritime, land and air transportation, communications, patents, trademarks, trade names and copyrights, foreign trade, and may legislate on matters covered by the Shari’ah, the law governing Muslims.

RA 9054 provides that ARMM "shall remain an integral and inseparable part of the national territory of the Republic." The President exercises general supervision over the Regional Governor. The Regional Government has the power to create its own sources of revenues and to levy taxes, fees, and charges, subject to Constitutional provisions and the provisions of RA 9054. The Shariah applies only to Muslims; its applications are limited by pertinent constitutional provisions (prohibition against cruel and unusual punishment).[4][1][broken citation]

The region is one of the most impoverished areas in the Philippines. It has a per capita gross regional domestic product of only PhP3,433 in 2005, 75.8 percent lower than the national average of PhP14,186. It is the lowest among the Philippines' 17 regions, the second lowest region has a per capita income almost double the ARMM's.[14] ARMM has a population of 4.1 million based on the 2007 census. It is the country's poorest region, where average annual income was just 89,000 pesos ($ 2,025) in 2006, less than 1/3 of Manila level.[15]

Poverty incidence in the region is a high 45.4 percent in 2003, almost twice the national average of 24.4 percent. Significant progress has been made in reducing poverty in the region, which was reduced by 10.5 percent from the 2000 figure, only the Caraga region has a higher poverty incidence in 2003. Lanao del Sur reduced its povery incidence by as much as 26.9 percent, placing itself as the 12th most successful province in poverty reduction. Tawi-Tawi and Sulu have reduced their figures by 18 and 17.6 percent, respectively. In 2000, all the four provinces of the ARMM were among the 10 poorest in the Philippines. By 2003, Lanao del Sur, Sulu and Tawi-Tawi were out of the bottom 10, leaving only Maguindanao, which remains to be the second poorest or the second with the highest incidence of poverty among the Philippines' provinces.[16][17]

Despite the autonomy, ARMM receives approximately 98% of its operating revenue from the National Government of the Philippines, and has yet to create significant, viable sources of additional revenue. Perhaps for this reason, the per capita spending on such vital services as education and infrastructure are among the lowest in the Philippines, and the five provinces of the ARMM continue to be ranked consistently on the lower rungs of economic development within the country. The per student expenditure on education, for example, is less than $100, with the result that students within ARMM schools generally score poorly, in comparison with other provinces, on standardized achievement tests administered throughout the country.

ARMM is one of the country's top producers of fish and marine resources, particularly seaweed, which is used in some toothpastes, cosmetics and paints. It has large mineral deposits, including copper and gold.[15]

Main articles: Music of the Philippines and Kulintang

The native Maguindanaon and other native Muslim/non-Muslim groups have a culture that revolves around kulintang music, a specific type of gong music, found among both Muslim and non-Muslim groups of the Southern Philippines.