Born in St. Thomas, Ontario, Hepburn attended school in Elgin County and hoped to become a lawyer. His educational career ended abruptly, however, when someone threw an apple at visiting dignitary Sir Adam Beck knocking his silk top hat off of his head. Hepburn was accused of the deed, denied it, but refused to identify the culprit. Refusing to apologise he walked out of his high school and obtained a job as a bank clerk at the Canadian Bank of Commerce where he worked from 1913 to 1917 eventually becoming an accountant at the bank's Winnipeg branch. He briefly served in the Royal Air Force in World War I before returning to St. Thomas to tend the family's onion farm.[1] In 2008 he had a school named after him only miles away from his family's farm.

After the war, Hepburn joined the United Farmers of Ontario (UFO) helping to start its branch in Elgin County, but by the mid-1920s he switched to the Liberal Party. In the 1926 election, he was elected to the Canadian House of Commons as a representative of Elgin West, and was overwhelmingly re-elected in the 1930 election.

Later that year he became leader of the Liberal Party of Ontario. His support of farmers and free trade, and his former membership in the UFO allowed him to attract Harry Nixon's rump of UFO Members of the Legislative Assembly (MLAs) into the Liberal Party (as Liberal-Progressives). This and the Great Depression led to the defeat the unpopular Conservative premier George Stewart Henry in the 1934 provincial election. His stance against the prohibition of alcohol allowed him to break the Liberal Party from the militant prohibitionist stance that had helped reduce it to a rural, Protestant south western Ontario rump in the 1920s.

As premier, Hepburn undertook a number of measures which enhanced his reputation as the practitioner of a highly vigorous style. He closed Chorley Park, the residence of the Lieutenant Governor of Ontario. Hepburn made a public show of austerity by auctioning off the chauffeur driven limousines used by the previous Conservative cabinet.[1] He also introduced a succession tax thereby increasing government revenues by taxing wealthy estates.[1] He also fired many civil servants. Hepburn cut spending on electric power from Quebec, gave money to mining industries in northern Ontario, and introduced compulsory milk pasteurization. In so doing, he has been credited with virtually wiping out bovine tuberculosis in the province.[2] 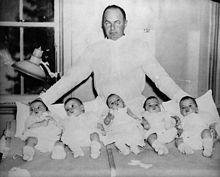 Breaking with the temperance stances of previous Liberal governments, Hepburn expanded the availability of liquor by allowing hotels to sell beer and wine.[1] The government also made international news by making the Dionne Quintuplets wards of the province in response to public outrage of plans by promoters to exploit the infants by putting them on display at the Chicago World's Fair.[1]

Fight with the CIO

Although in later years Hepburn was to form a Liberal-Labour alliance with the Communist Party of Canada, yet as Premier he was opposed to unions and refused to let the CIO form unions in Ontario. On April 8, 1937, the CIO-backed General Motors plant in Oshawa went on strike, demanding 8-hour workdays, a seniority system, and recognition of their CIO-affiliated United Auto Workers union. The strikers were also supported by the Co-operative Commonwealth Federation, Canada's left-wing party at the time. Hepburn, at the time professing a deep concern about radicals among auto workers and supported by the owners of the plant and General Motors, organized a volunteer police force to help him put down the strike when Prime Minister William Lyon Mackenzie King refused to send the Royal Canadian Mounted Police. This force was somewhat derisively known as "Hepburn's Hussars," or the "Sons of Mitches". Cabinet ministers who disagreed with Hepburn over the issue were forced to resign. However, the strike held out, and Hepburn capitulated on April 23, 1937.

Hepburn remained a bitter opponent of Mackenzie King after the strike, and harshly criticized King's war effort in 1940 after the outbreak of World War II introducing a resolution into the Ontario legislature which was passed 44 to 10, that accused the federal government of mishandling the war effort. The Conservative opposition voted unanimously for the resolution but the motion split the governing Liberals with nine members of Hepburn's caucus voting against and others leaving the chamber before the vote.[1] Hepburn thought Canada should be doing more to support the war, and helped organize the military districts in Ontario, encouraging men to volunteer when Mackenzie King chose not to introduce conscription.

Hepburn supported Mackenzie King's opponent, the arch-Conservative Arthur Meighen, in a by-election in Toronto in 1942; (this, notwithstanding Hepburn's later alliance with the Communist Party of Canada). In the event, Meighen's unusual source of support did not prove to bring him to success: he lost the by-election. However, King was politically much stronger than Hepburn and federal Liberal supporters as well as those who thought an erratically driven rift between the provincial and federal parties was suicidal called for him to step down.

Hepburn ultimately resigned as Premier in October 1942, an event which in different ways continued to cause ripples in the Premierships of Ontario's next few Provincial leaders.

Fall of the Liberal government

Initially, he remained Liberal leader and appointed an ally, Gordon Daniel Conant as Premier of the province while Hepburn remained Provincial Treasurer leading many to think that Conant was Premier in name only. Senior cabinet ministers such as Provincial Secretary Harry Nixon resigned demanding a leadership convention and due to pressure from both provincial Liberals and the federal wing one was held in May 1943 at which Hepburn finally tendered his resignation as leader (by telegram) and Nixon was elected the new party leader, and was thus appointed as Premier. The Liberals under Nixon were routed soon after in the 1943 Ontario election, falling to third party status behind the Progressive Conservatives led by George Drew, and the Co-operative Commonwealth Federation led by Ted Jolliffe.

Hepburn himself was re-elected in his riding as an Independent Liberal while calling for a Liberal-Conservative coalition against the burgeoning CCF.[1] The Liberal caucus unanimously asked Hepburn to resume the party's leadership in 1944.

Now branding Drew's Conservatives as the greatest menace to Canada, he reversed his earlier criticism of Mackenzie King's war effort and campaigned for Liberal candidate General Andrew McNaughton in a 1945 federal by-election.[1] Provincially, his earlier, vehement doubts about radicals among auto workers now muted, Hepburn formed a Liberal-Labour alliance with the Communist Party of Canada (at the time known as the Labour Progressive Party) for the 1945 Ontario election, but lost his own seat in the Legislature and retired to his farm in St. Thomas, where he died in 1953.