Electric locomotives were first used on the London Underground when the first deep-level tube line, the City and South London Railway (C&SLR), was opened in 1890. The first underground railways in London, the Metropolitan Railway (MR) and the Metropolitan District Railway (MDR), used specially built steam locomotives to haul their trains through shallow tunnels which had many ventilation openings to allow steam and smoke to clear from the tunnels. It was impossible to use steam locomotives in the small unvented tubular tunnels of the deep-level lines, and the only options were rope haulage (as on the Glasgow Underground) or electric locomotives.

The C&SLR was opened just a few year after the very first use of electricity to drive rail vehicles (trains or trams) and the primitive locomotives reflected this. Over the next 15 years, motors became smaller and (size for size) far more powerful; gear drives and motor suspension were developed and reliable multiple unit control became available. Electric multiple unit trains became the standard, but electric locomotives were still being built. 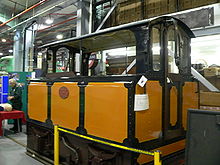 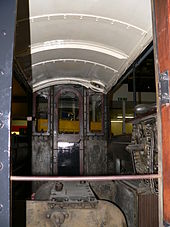 The interior of C&SLR locomotive number 13

The locomotives were small and short to fit within the small diameter tunnels (10 ft 2 in, 3.1 metre) and ran on just four wheels (all driven). The cab was built along the centre line of the locomotive with a door at each end and the controls and equipment mounted on the sides. There was a single driving position at one end of the locomotive with the power controller on one side and the brakes (air-brake valve and hand-brake column) on the other. The controls worked directly so no form of multiple-unit control was ever possible.

Each locomotive could haul three coaches at up to 25 mph on good track, but fully loaded trains on an uphill gradient sometimes presented problems. At the end of a run, the arriving locomotive was trapped in the platform by its carriages. A replacement locomotive hauled the train away on the next trip and the released locomotive was then available to head the next incoming train (this is called "slip working").

The train air-braking system, controlled by the driver, was fed from an air reservoir on the locomotive and, as the original locomotives were unable to generate their own compressed air, the reservoirs were recharged at Stockwell Station. Later, locomotives were fitted with compressors.

With locomotive No. 2 confined to duties at Stockwell and No. 1 believed[by whom?] also to have been rarely in service, there was a need for an additional two locomotives to operate the service. Nos. 15 & 16 were built by Siemens with a modified design of motor, which attempted to overcome the problem of burnt-out armatures that had plagued the line since its opening.

In 1895, the C&SLR itself built locomotive No. 17 at Stockwell depot and ordered three more locomotives from different manufacturers with a more efficient control system using series-parallel switching of the motors. Another two locomotives (Nos. 21 & 22) included further refinements and were the prototypes for the final batches of locomotives. Nos. 23 to 52 were built by Crompton to an improved design but still bore a strong external resemblance to the original locomotives. Locomotives Nos. 3-12 were eventually rebuilt with new electrical equipment to improve their performance.

Following the introduction of new locomotives and the abandonment of the restrictive King William Street terminus in 1900, the C&SLR was able to run trains with four carriages. Five-carriage trains were introduced from 1907. Six-carriage trains were operated from October 1923 for a brief period before the last part of the line was closed for reconstruction and tunnel enlargement in November 1923.

The enlarged tunnels allowed the locomotive hauled trains to be replaced by 'Standard' Stock electrical multiple units. 44 locomotives were in use just before the closure and some remained in service until 1925 hauling works trains while the tunnels were being enlarged.

One locomotive survives in preservation. It was originally displayed as No.1, but investigations over a number of years finally identified it as either No. 13 or 14, and suggested that it was more likely to be No. 13 (the number which it now carries). After being displayed in the Science Museum, it was transferred to the Acton store of the London Transport Museum, and then to the newly reopened museum in Covent Garden. A motor and axle from No. 36 are held by the Science Museum and are also currently in store.

Opened in 1900, the Central London Railway initially used 44-ton Bo-Bo electric locomotives to haul its trains. These long, low locomotives had deep plate frames, a central cab and equipment compartments on front and rear. The cabs had four doors, one on each side and one on each end (for safe access/exit when in the tunnels). The direct-working controls did not allow the locomotives to work in multiple.

A serious design fault in these locomotives was their very high unsprung weight (33 tons). This resulted in serious problems with noise and vibration. Complaints from local residents started immediately after the service commenced and were such that the Board of Trade imposed a speed limit until modifications could be made.

By 1903 new multiple unit trains had been delivered and the locomotives were withdrawn from day-to-day service.

In 1902, the Metropolitan Railway started to electrify its routes. To this end, in 1904, twenty locomotives were ordered from two different companies, each constructing ten. The first were delivered by British Westinghouse in 1905 and were numbered 1-10. These bogie locomotives featured a central cab, weighed 50 tons, and had four 200 hp traction motors. The second type were built by British Thompson Houston to a box car design, and were numbered 11-20.

These locomotives worked the outer suburban routes, hauling conventional carriage stock. Other routes were worked by 1902- and 1904-built electrical multiple units. The locomotives lasted in service until 1922/1923, when they were replaced by new locomotives built by Metropolitan Vickers.

In the early 1920s, the Metropolitan Railway placed an order with Metropolitan Vickers of Barrow-in-Furness for rebuilding the twenty surviving electric locomotives. When work started on the first locomotive, it was found to be impractical and uneconomical and the order was changed to building completely new locomotives using some equipment recovered from the originals. The new locomotives were built in 1922-1923, and were numbered 1-20. They were all named after famous London residents and had a top speed of 65 mph. There were four 300 hp motors, total 1,200 hp. 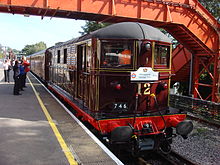 No.12 'Sarah Siddons' at Amersham

In 1925, no. 15 was exhibited on the Metropolitan Railway's stand at the British Empire Exhibition; the panelling was removed from one side, so that the equipment inside could be viewed.[3] The locomotives were all named, the first nameplates being fitted on 18 March 1927. Nineteen of the names chosen were of people, real or fictitious, who had a connection with the area served by the Metropolitan; the exception was no. 15, the exhibition locomotive of 1925, which became Wembley 1924.[4]

The remaining locomotives were all withdrawn from passenger work in 1961, following deliveries of A60/A62 Stock. However, four locomotives, nos. 1, 3, 5 and 12, were transferred to departmental duties:-

No.1 'John Lyon'. Based at Neasden for shunting, it lasted until it needed major repairs in the mid-1960s. After standing out of use, it was eventually dismantled for spares and the remains scrapped in 1974.

No.3 'Sir Ralph Verney'. Based at Ruislip between 1961 and 1965 mainly for shunting the new A60/A62 stock as it was delivered. It was scrapped once deliveries were complete. 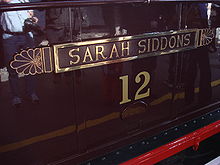 No.5 'John Hampden'. Sent to Acton Works to act as a shunter, it did not see much use. In 1971 it was refurbished for use on special trains run in connection with open days to mark the withdrawal of the last Ex GWR steam locomotives. No.5 was moved to the London Transport Collection at Syon Park in 1973 (a move that involved removing it from its bogies) and then to the London Transport Museum at Covent Garden in 1979 where it remains.

No.12 'Sarah Siddons'. Based at Ealing Common as a shunter, it was converted to test new types of brake block. With No.5, it was refurbished for special trains in 1971 but returned to brake-block testing and while still a departmental locomotive, it was exhibited at Shildon in 1975. Finally withdrawn in 1982, No.12 has been retained in working order and has run a number of special passenger workings up until 2003. No.12 together with ex-BR 20227 ran a special train between Harrow-on-the-Hill and Amersham in June 2007. It has been modified to allow it to run on the 'Main Line' third rail electrification and so is no longer limited to running on the Underground network's four-rail system.

As part of the electrification of the District Line line in 1905, the Metropolitan District Railway bought ten bogie box cab locomotives. These were generally similar to the original District Line multiple units.

The locomotives were used to haul London and North Western Railway passenger trains on the electrified section of the Outer Circle route between Earl's Court and Mansion House. By 1909 these services had been withdrawn and the locomotives were used to haul additional District Line trains, but this situation did not last for long. Trains from the LTSR were extended over the District line.

In 1911, three locomotives had been withdrawn and scrapped. Their electrical equipment was reused on new multiple unit trains that were being introduced. The remaining locomotives became L1 to L7.

The locomotives were regarded as underpowered and as there were equipped for working in multiple, were often used in pairs. Each locomotive had four 200 hp motors, total 800 hp.

All the remaining locomotives were eventually scrapped. 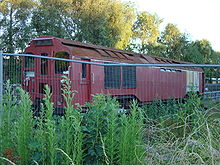 For moving rolling stock around the main workshops at Acton, four electric locomotives were created out of withdrawn passenger vehicles.