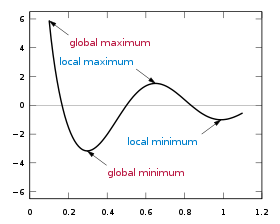 In mathematics, the maximum and minimum (plural: maxima and minima) of a function, known collectively as extrema (singular: extremum), are the largest and smallest value that the function takes at a point either within a given neighborhood (local or relative extremum) or on the function domain in its entirety (global or absolute extremum).[1][2][3]

More generally, the maximum and minimum of a set (as defined in set theory) are the greatest and least element in the set. Unbounded infinite sets such as the set of real numbers have no minimum and maximum.

To locate extreme values is the basic objective of optimization.

Restricted domains: There may be maxima and minima for a function whose domain does not include all real numbers. A real-valued function, whose domain is any set, can have a global maximum and minimum. There may also be local maxima and local minima points, but only at points of the domain set where the concept of neighborhood is defined. A neighborhood plays the role of the set of x such that |x − x∗| < ε.

A continuous (real-valued) function on a compact set always takes maximum and minimum values on that set. An important example is a function whose domain is a closed (and bounded) interval of real numbers (see the graph above). The neighborhood requirement precludes a local maximum or minimum at an endpoint of an interval. However, an endpoint may still be a global maximum or minimum. Thus it is not always true, for finite domains, that a global maximum (minimum) must also be a local maximum (minimum).

For any function that is defined piecewise, one finds a maxima (or minima) by finding the maximum (or minimum) of each piece separately; and then seeing which one is biggest (or smallest). 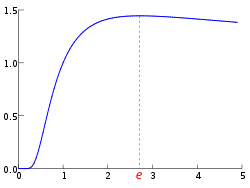 The global maximum of

Functions of more than one variable

For functions of more than one variable, similar conditions apply. For example, in the (enlargeable) figure at the right, the necessary conditions for a local maximum are similar to those of a function with only one variable. The first partial derivatives as to z (the variable to be maximized) are zero at the maximum (the glowing dot on top in the figure). The second partial derivatives are negative. These are only necessary, not sufficient, conditions for a local maximum because of the possibility of a saddle point. For use of these conditions to solve for a maximum, the function z must also be differentiable throughout. The second partial derivative test can help classify the point as a relative maximum or relative minimum.

In contrast, there are substantial differences between functions of one variable and functions of more than one variable in the identification of global extrema. For example, if a bounded differentiable function f defined on a closed interval in the real line has a single critical point, which is a local minimum, then it is also a global minimum (use the intermediate value theorem and Rolle's theorem to prove this by reductio ad absurdum). In two and more dimensions, this argument fails, as the function

In relation to sets

In a totally ordered set, or chain, all elements are mutually comparable, so such a set can have at most one minimal element and at most one maximal element. Then, due to mutual comparability, the minimal element will also be the least element and the maximal element will also be the greatest element. Thus in a totally ordered set we can simply use the terms minimum and maximum. If a chain is finite then it will always have a maximum and a minimum. If a chain is infinite then it need not have a maximum or a minimum. For example, the set of natural numbers has no maximum, though it has a minimum. If an infinite chain S is bounded, then the closure Cl(S) of the set occasionally has a minimum and a maximum, in such case they are called the greatest lower bound and the least upper bound of the set S, respectively..