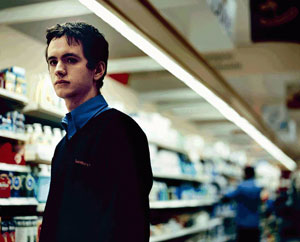 caption = The poster from the original short film
writer =
starring =

"Cashback" is the name of two films directed by : a 2004 short film and a 2006 feature film. Both were produced by , starring , and . The feature was released by in late 2006. [ [http://www.gaumont.com/films/cashback/index.html Gaumont Films: "Cashback"] ] Left Turn Films produced both films.

After a painful break up with his first girlfriend Suzy, Ben, an aspiring artist, develops . To take his mind off his problem he spends his nights working at a local supermarket, where he meets colorful characters. He falls in love with his colleague Sharon.

He lets his imagination run wild. In particular, he imagines that he can stop time for others, so that he can walk around in a world that is "frozen" like in mode of a film. He imagines female patrons standing frozen in the supermarket, so that he can undress and draw them.

We see in flashback, with Ben's voice-over explaining how he always has been impressed by the beauty of the female body, how he, as a young boy, could see a Swedish boarder naked while she was going to and coming from the shower (we are told that, being Swedish, she did not believe this situation required modesty). Also we see little Ben's friend Sean Higgins showing Ben his parents' adult magazines.

Sharon is Ben's date when they go to the birthday party of their boss. Ben meets Suzy who wants to continue their relationship. Ben refuses, but Sharon gets a negative impression seeing Ben with Suzy for a moment, and gets angry.

As a colleagues Barry and Matt phone him, one of them pretending to be an art gallery owner who is interested in his drawings, and an appointment is made. It turns out well: the gallery owner, seeing Ben's work, is interested, and an exhibition follows. Sharon also visits it and is impressed not only by Ben's success, but also by the many paintings portraying her; ceasing to be angry with him.

The feature film incorporates virtually the entire short film which focused on the fantasy elements seen in the feature. This includes the sequence in the supermarket where Ben imagines he has frozen patrons at the store, walks around them and draws them. The short film also introduces many of the key characters from the feature film.

The feature film was produced more than a year after the short was completed. Following to a decision in December 2005 to proceed with the feature, Ellis completed the expanded script in just seven days. After getting committments from his cast in March he secured financing and the film went into production in May. This schedule was exceedingly condensed by modern film making standards. [Interview with Sean Ellis appearing on DVD version of "Cashback"] As all of the key players were available to appear in the feature, it was possible to incorporate the original short virtually without change.

The short film includes some original music, including a theme written by , but much of the incidental music consists of established classical pieces, including Beethoven's "". The feature film uses an original score composed by including one piece, "Frozen" which featured on the album, "" in July 2006. [Cite web
url=http://www.classicfm.co.uk/article.asp?id=251585
title=The Quiet Room 'Contemporary Classic Calm'
publisher=Classic FM
date=
accessdate=2008-07-14]

The short film and won 14 awards at international film festivals and was nominated for the 2006 . [ [http://www.oscars.org/78academyawards/nomswins.html Nominees and Winners | 78th Annual Academy Awards | Academy of Motion Picture Arts and Sciences ] ] After the nomination, it was a popular download from iTunes (US). [BBC, [http://news.bbc.co.uk/2/hi/entertainment/4769588.stm "Bookmakers slash Crash Oscar odds"] , March 3, 2006]

The feature had its North American premiere on September 10, 2006, at the . It was subsequently screened at a number of other international festivals. The film got a limited theatrical release in the US on 17th July 2007 and in the UK May 2008.

The DVD for the European region was released in September 2007. The UK DVD release is scheduled for September 2008.

Between 2001 and 2004, was working on her own screenplay, originally titled "Cashback, Paper or Plastic", later changed to simply "Cashback". Obisanya's screenplay was also a romantic comedy and had a similar setting. Obisanya sued Sean Ellis and his production company for infringing her copyright, seeking £16 million in damages. The claim was struck out on the basis that, given the chronology of events, Obisanya could not reasonably establish that there was any possibility that the defendants had gained access to her screenplay and that any similarities could be explained by the sharing of a commonplace setting. Also, Obisanya was restrained from making any similar allegations in the future and ordered to pay £10,000 in costs. [Cite web
url=http://ipkitten.blogspot.com/2008/06/cashback-claimant-struck-out.html
title=Cashback claimant struck out
publisher=
date=June 2008] [Cite web
url=http://www.newsshopper.co.uk/news/localheadlines/display.var.2215003.0.i_want_16m_cashback.php
title=I want £16m 'Cashback'
publisher=newsshopper.co.uk
date=
accessdate=2008-07-16]

* as Ben Willis, an art student
* as Sharon Pintey, Ben's colleague and eventual girlfriend
* as Sean Higgins, Ben's friend
* as Suzy, Ben's ex-girlfriend
* as Jenkins, his boss
*Michael Dixon as Barry Brickman
* as Matt Stephens
* as Brian
* as Naked Girl

Awards (for the short)

Awards (for the feature)