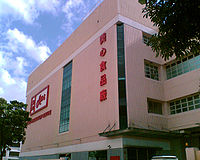 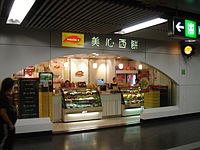 Maxim's Cakes can be commonly found in MTR stations 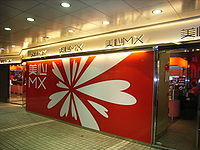 Maxim's (Full name: Maxim's Caterers Limited) is Hong Kong's largest food & beverage corporation and restaurant chain. Founded in 1956 by Dr James Tak Wu and his brother S.T. Wu, along with other shareholders, the Hong Kong-based company operates a diverse range of food outlets, including bakeries, fast food shops, and restaurants offering a variety of Chinese, Japanese, Southeast Asian and other cuisines. The company also provides catering services to specific industrial and commercial businesses as well as schools and hospitals throughout Hong Kong. In addition, Maxim's is a partner with Starbucks Coffee International, Inc. in operating Starbucks outlets in Hong Kong, Macau, Shenzhen and Guangzhou. It is 50% owned by Dairy Farm International Holdings Limited.

At present, Maxim's operates over 420 branches, employing 12,800 people and serving more than 480,000 customers per day. With regards to its wide range of catering services, Maxim's also offers a series of products tailor-made for specific festivals, most notably mooncakes during the lead-up to the Mid-Autumn Festival, Nian gao or glutinous rice cakes at Chinese New Year, and roast turkeys at Christmas. Maxim's mooncakes have been awarded the "Q-Mark" certificate of excellence along with an internationally approved HACCP (Hazard Analysis and Critical Control Points) certificate confirming its quality. Incidentally, it has continuously achieved the highest sales volume in Hong Kong of any mooncake supplier for the past nine years (1998-2006).

Maxim's official aim is to be a "company of three benefits" (「三益公司」 in Chinese); the "three benefits" refer to the employee, the customer and the employer - all three are to be equally well-served by the company.

Maxim's originally started out in the 1950s under the name of "Hong Kong Caterers". In December 1956, Maxim's opened its first restaurant and nightclub (offering French cuisine) in the basement of the old Lane Crawford Building (now the site of The Landmark). It proved an instant success and soon became Hong Kong's premier night-time gathering spot. The world-famous rock-and-roll group The Platters performed at the restaurant's opening, and in 1960 The Beatles also performed there during a visit to Hong Kong.

In the mid-1960s, with the opening of new nightlife venues in the form of the Mandarin Oriental and Hilton hotels, Dr James Tak Wu and his brother, S.T. Wu, converted their Maxim's outlets into upmarket coffee shops, opening 20 different branches within a period of two years. The first branch of Maxim's Cakes opened in 1966 in Tsim Sha Tsui's Ocean Terminal, alongside a very successful Maxim's restaurant, Maxim's Boulevard.

In 1970, Maxim's appointed Annie Wu Suk-ching, daughter of co-founder, Dr James Tak Wu, to bring its catering services to Osaka's Expo '70 under the banner of "Jade Garden", providing the Hong Kong Pavilion with classic Cantonese delicacies, such as Dim Sum. Jade Garden earned widespread critical acclaim for its services, and within the very next year the first of Maxim's Chinese Restaurants, also named "Jade Garden", was opened on the fourth floor of Tsim Sha Tsui's Star House. Pioneering a brand new management approach of "Chinese food with Western standards of service" and taking the lead in adopting modern, wholly merit-based hiring practices, Jade Garden did more than live up to the expectations created at Expo '70. In light of this success, more Cantonese restaurants followed, including Maxim's Chinese Restaurant, Maxim's Palace, Serenade Chinese Restaurant and Guangzhou Garden. In 1972, the first Maxim's Fast Food outlet was established. Since then it has become one of Hong Kong's representative fast food shops.

Between 1970 and 1980, Maxim's restaurants expanded to include brands that served regional cuisine from different parts of China. Examples include Chiuchow Garden, Peking Garden, Hunan Garden and Sichuan Garden. At the same time, the company was the first in Hong Kong to use Kobe Beef in its two newly opened upmarket Japanese restaurants.

In 1980, when flights opened up between Mainland China and the United States, the Civil Aviation Administration of China (CAAC) realised that there was a problem - there had been no previous air catering agreements with American companies. The Hong Kong branch of the Xinhua News Agency swiftly recommended Maxim's Group to the CAAC, but this proposed Sino-foreign joint venture soon encountered some difficulties. In the end the CAAC asked for advice from the Central Government leader, Deng Xiaoping, to which he replied, "Does Mr. Wu know how to make bread? If he does then let him do it!" As a result, Maxim's Catering obtained the right to manage the CAAC's food operations, becoming the first Sino-foreign joint venture and earning the coveted license number 001.

In 1982, Maxim's Cakes opened branches in every MTR station, pushing new boundaries. By 1988, every station on the Kowloon-Canton Railway (KCR) also had a branch. In 1986, half of Maxim's company shares were sold to Jardine Group, but the Wu family still possessed the right to make strategic decisions; this position has been retained up till now. As a consequence, more branches of Maxim's various brands and restaurants have been opened in properties owned by Hongkong Land, such as Jardine House, The Landmark, Exchange Square and the World Trade Centre (Hong Kong), spurring rapid growth.

In 1992, Maxim's attempted to expand northwards to Guangzhou, but as the market conditions were not ripe, the business was withdrawn. Michael Wu, a third-generation member of the Wu family, joined Maxim's at the age of 21; he is currently (as of 2009) the brand's General Manager.

In January 1999, as a Hello Kitty craze swept through Hong Kong, Maxim's partnered with Sanrio and opened three branches of the new Hello Kitty Café in Tsuen Wan and Kowloon. After the craze passed, Maxim's did not continue its partnership with Sanrio and all three branches were closed. In July the same year, Maxim's Restaurant and Café Yoyo in Causeway Bay's Hong Kong Building (on Yee Wo Street) were closed down. The site where they formerly stood is now Causeway Place.

In 2000 Michael Wu became a Maxim's board member and general manager. Maxim's opened an Ultraman Café in Shatin's New Town Plaza, which was then converted into a Beijing restaurant after two years of operation. In May, Maxim's successfully brought Starbucks Coffee culture to Hong Kong, partnering with Starbucks Coffee International, Inc. to form Coffee Concepts Ltd.. Within the first two months of operation, Starbucks outlets were already making a profit. In two years' time, 30 new branches were opened throughout Hong Kong, and in late 2002 Starbucks expanded to Macau and Shenzhen. The travel magazine Condé Nast Traveler named Thai Basil as one of the "World's 60 Best New Restaurants".

In 2003, Maxim's co-founder S.T. Wu died at the age of 92. The same year, Maxim's Cakes launched a new brand, simply bread, and Peking Garden in Central's Alexandra House was reopened after more than a year of renovation. Designed by a Chilean architect, the renovated Peking Garden is notable for its eclectic, arresting decor featuring bronze and dark wooden touches as well as walls painted an unmistakably Latin shade of red. With the spread of the SARS epidemic to Hong Kong, Maxim's business dropped by 40%, but business in its coffee shops and bakeries actually increased and profits were made in these sectors.

Since then, Maxim's has continued to expand its operations. In 2004, a new restaurant outlet, rice paper, was opened, ushering in a new wave of French-Vietnamese restaurants. During the same year, Maxim's Fast Food began producing ready meals and appetisers to be sold in 7-11 and Wellcome supermarkets. When Starbucks Coffee celebrated its fifth year of operation in Hong Kong in May 2005, there were already 50 branches across the SAR, far exceeding the required amount outlined in the partnership contract.

As of 2007, there have been three new additions to Maxim's Group. Maxim's bought Genki Sushi in early 2006, and the company introduced renowned American restaurant Lawry's the Prime Rib to Hong Kong the same year. Maxim's has also teamed up with Australian chef Geoff Lindsay, creating the restaurant Pearl on the Peak in the newly renovated Peak Tower.