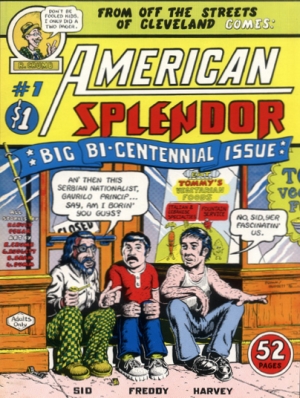 "American Splendor" is a series of s and written by and drawn by a variety of artists. The first issue was published in 1976 and the most recent in September 2008, with publication occurring at irregular intervals. Publishers have been, at various times, Harvey Pekar himself, Dark Horse Comics, and DC Comics.

Despite comic books being traditionally the province of fantasy-adventure and other genre stories, Pekar felt that the medium could be put to wider use:

“When I was a little kid, and I was reading these comics in the ’40s, I kind of got sick of them because after a while, they were just formulaic. I figured there was some kind of a flaw that keeps them from getting better than they are, and then when I saw Robert Crumb’s work  in the early ’60s, when he moved from Philadelphia to Cleveland, and he moved around the corner from me, I thought ‘Man, comics are where it’s at.’” [Heater, Brian. [http://www.nypress.com/19/21/books/ "A Book called Malice," "New York Press" (2006).] Accessed Sept. 24, 2008.]

The stories in "American Splendor" concern the everyday life of Pekar in , . Situations covered include Pekar’s job as a file clerk at a hospital and his relations with work colleagues and patients there. There are also stories about Pekar and his relations with friends and family, including his third wife and their adopted daughter Danielle. Other stories concern everyday situations such as Pekar’s trouble with his car, money-worries, his health, and his concerns and anxieties in general. Several issues (#14, #13, # [18] ) give accounts of Pekar’s becoming a recurring guest on , including the 1988 interview segment in which Pekar criticized Letterman for ducking criticism of , the parent company of . "American Splendor" sometimes departs from Pekar's own life, with stories about Jazz musicians ( [#23] ), the artists for his comics (# [25] ), and a three-issue miniseries "American Splendor: Unsung Hero" (# [29] - [31] ), which chronicles the Vietnam experience of Pekar's African-American co-worker Robert McNeill.

As Pekar was not an artist himself, and was incapable of "drawing a straight line,"Fact|date=September 2008 he recruited his friend, underground comics artist , to help create a comics series. Besides Crumb, other notable "American Splendor" illustrators include , , , , , , , , , , , , , , , , , and even writer . More recent issues have employed a new crop of artists, including , , , , , , and .

Many stories from "American Splendor" have been collected into reprint anthologies from various publishers, their material not (for the most part) overlapping. In addition, Pekar has written two larger works which carry the "American Splendor" label, "Our Movie Year" (, 2004), a collection of comics written about or at the time of the "American Splendor" film, and "Ego & Hubris: The Michael Malice Story" (Ballantine, 2006). Pekar has also written two graphic novels which are not officially labeled "American Splendor" but which should arguably be considered part of it: "Our Cancer Year" (, 1994), co-written with Pekar's wife and illustrated by , covering the year when Pekar was diagnosed with cancer; and "The Quitter" (, 2005), illustrated by , which deals with Pekar’s youth.

In a movie adaptation featuring playing Pekar (as well as appearances by Pekar himself) and as his wife was released to critical acclaim and first honors at the in addition to the for best adapted screenplay. It was written and directed by documentarists and . It was filmed entirely on location in and Lakewood in . It was nominated for at the 2003 (it lost to "").

* 's character on the , "" is often seen reading "American Splendor".Fact|date=February 2007