The threshold of hearing is generally reported as the RMS sound pressure of 20 µPa (micropascals) = 2×10−5 pascal (Pa). It is approximately the quietest sound a young human with undamaged hearing can detect at 1,000 Hz.[3] The threshold of hearing is frequency dependent and it has been shown that the ear's sensitivity is best at frequencies between 1 kHz and 5 kHz.[3] 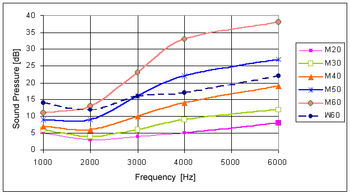 Measurement of the absolute hearing threshold provides some basic information about our auditory system.[3] The tools used to collect such information are called psychophysical methods. Through these, the perception of a physical stimulus (sound) and our psychological response to the sound is measured.[4]

There are several different psychophysical methods which can be used for the measurement of absolute threshold. These methods may vary in many ways; however, certain aspects are identical. Firstly, the stimulus is defined, and the manner by which the person should respond is clearly specified. The sound is then presented to the listener and the level of the stimulus is manipulated in a predetermined pattern. The absolute threshold is defined statistically, often as an average of all obtained hearing thresholds.[3]

Some procedures use a series of trials, with each trial using the ‘single-interval “yes”/”no” paradigm’. This means that sound may be present or absent in the single interval, and the listener has to say whether he thought the stimulus was there. When the interval does not contain a stimulus, it is called a "catch trial".[3]

Classical methods date back to the 19th century and were first described by Gustav Theodor Fechner in his work Elements of Psychophysics.[4] Three methods are traditionally used for testing a subject's perception of a stimulus: the method of limits, the method of constant stimuli, and the method of adjustment.[3]

Method of limits
In the method of limits, the tester controls the level of the stimuli. Single-interval “yes”/”no” paradigm’ is used, but there are no catch trials.

There are several series of descending and ascending runs.

The trial starts with the descending run, where a stimulus is presented at a level well above the expected threshold. When the subject responds correctly to the stimulus, the level of intensity of the sound is decreased by a specific amount and presented again. The same pattern is repeated until the subject stops responding to the stimuli, at which point the descending run is finished.

In the ascending run which comes after, the stimulus is first presented well below the threshold and then gradually increased in two decibel (dB) steps until the subject responds. 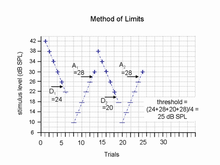 Series of descending and ascending runs in Method of Limits
As there are no clear margins to ‘hearing’ and ‘not hearing’, the threshold for each run is determined as the midpoint between the last audible and first inaudible level.

The subject's absolute hearing threshold is calculated as the mean of all obtained thresholds in both ascending and descending runs.

There are several issues related to the method of limits. First is anticipation, which is caused by the subject's awareness that the turn-points determine a change in response. Anticipation produces better ascending thresholds and worse descending thresholds.

Another problem may be related to step size. Too large a step compromises accuracy of the measurement as the actual threshold may be just between two stimulus levels.

Finally, since the tone is always present, “yes” is always the correct answer.[3] 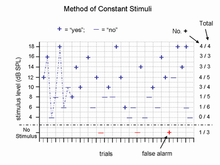 Subject responding “yes”/”no” after each presentation
In the method of constant stimuli, the tester sets the level of stimuli and presents them at completely random order.

Thus, there are no ascending or descending trials.

The subject responds “yes”/”no” after each presentation.

The stimuli are presented many times at each level and the threshold is defined as the stimulus level at which the subject scored 50% correct. “Catch” trials may be included in this method.

Method of constant stimuli has several advantages over the method of limits. Firstly, the random order of stimuli means that the correct answer cannot be predicted by the listener. Secondarily, as the tone may be absent (catch trial), “yes” is not always the correct answer. Finally, catch trials help to detect the amount of a listener's guessing.
The main disadvantage lies in the large number of trials which are needed to obtain the data and therefore long time required to complete the testing.[3] 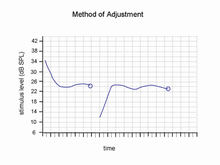 The subject reduces or increase the level of the tone

However, unlike in the method of limits, here the stimulus is controlled by the listener. The subject reduces the level of the tone until it cannot be detected anymore, or increases until it can be heard again.

Also this method can produce several biases. In order to avoid giving cues about the actual stimulus level, the dial must be unlabeled. Apart from already mentioned anticipation and habituation, stimulus persistence (preservation) could influence the result from the method of adjustment.

In the descending runs, the subject may continue to reduce the level of the sound as if the sound was still audible, even though the stimulus is already well below the actual hearing threshold.

In contrast, in the ascending runs, the subject may have persistence of the absence of the stimulus until the hearing threshold is passed by certain amount.[5]

Two intervals are presented to a listener, one with a tone and one without a tone. Listener must decide which interval had the tone in it. The number of the intervals can be increased, but this may cause problems to the listener who has to remember which interval contained the tone.[3][6]

Unlike the classical methods, where the pattern for changing the stimuli is preset, in adaptive methods the subject's response to the previous stimuli determines the level at which a subsequent stimulus is presented.[7] 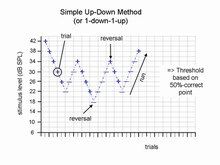 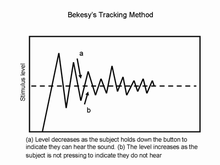 The threshold being tracked by the listener
Bekesy's method contains some aspects of classical methods and staircase methods. The level of the stimulus is automatically varied at a fixed rate. The subject is asked to press a button when the stimulus is detectable.
Once the button is pressed, the level is automatically decreased by the motor-driven attenuator and increased when the button is not pushed. The threshold is thus tracked by the listeners, and calculated as the mean of the midpoints of the runs as recorded by the automat.[3] 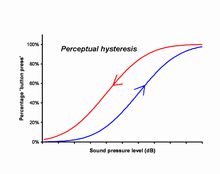 Hysteresis can be defined roughly as ‘the lagging of an effect behind its cause’.

When measuring hearing thresholds it is always easier for the subject to follow a tone that is audible and decreasing in amplitude than to detect a tone that was previously inaudible.

This is because ‘top-down’ influences mean that the subject will be expecting to hear the sound and will, therefore, be more motivated with higher levels of concentration.

The ‘bottom-up’ theory explains that unwanted external (from the environment) and internal (e.g. heartbeat) noise will result in the subject only responding to the sound if the signal to noise ratio is above a certain amount.

In practice this means that when measuring threshold with sounds decreasing in amplitude, the point at which the sound becomes inaudible will always be lower than the point at which it returns to audibility. This phenomenon is known as the ‘hysteresis effect’.

Psychometric function ‘represents the probability of a certain listener's response as a function of the magnitude of the particular sound characteristic being studied’.[8]

To give an example, this could be the probability curve of the subject detecting a sound being presented as a function of the sound level. When the stimulus is presented to the listener one would expect that the sound would either be audible or inaudible, resulting in a 'doorstep' function. In reality a grey area exists where the listener is uncertain as to whether they have actually heard the sound or not, so their responses are inconsistent, resulting in a psychometric function.

The psychometric function is a sigmoid function which is characterised by being ‘s’ shaped in its graphical representation.

Minimal audible field and minimal audible pressure are important when considering calibration issues and they also illustrate that the human hearing is most sensitive in the 2–5 kHz range.[2]

For example the most quiet sound a subject can hear is 16 dB if the sound is presented at a duration of 200 ms. If the same sound at 16 dB is then presented for a duration of 20 ms only the most quiet sound that can now be heard by the subject goes up to 26 dB. In other words if a signal is shortened by a factor of 10 then the level of that signal must be increased by as much as 10 dB to be heard by the subject.

The ear operates as an energy detector that samples the amount of energy present within a certain time frame. A certain amount of energy is needed within a time frame to reach the threshold. This can be done by using a higher intensity for less time or by using a lower intensity for more time. Sensitivity to sound improves as the signal duration increases up to about 200 to 300 ms, after that the threshold remains constant.[2]

The timpani of the ear operates more as a sound pressure sensor. Also a microphone works the same way and is not sensitive to sound intensity.

The audible frequency range is usually quoted as 20 Hz to 20,000 Hz. Obtaining thresholds is reliant on stimuli being presented in frequencies within the Auditory Response Area.