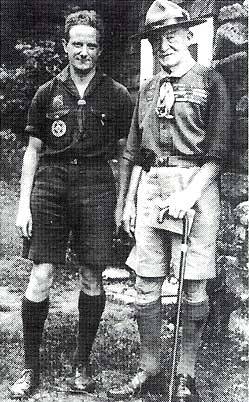 William Hillcourt (August 6, 1900 &ndash; November 9, 1992), also popularly known within the Scouting movement as "Green Bar Bill" and "Scoutmaster to the World", was an influential leader in the (BSA) organization for much of the twentieth century, acclaimed as "the foremost influence on development of the Boy Scouting program".

Hillcourt was Danish, but moved to the as a young adult and worked for the BSA. From his start in Danish Scouting in 1910 though his death in 1992, he was continuously active in Scouting. He traveled all over the world teaching and training both Scouts and s, earning many of Scouting's highest honors. His legacy and influence can still be seen today in the BSA program and in Scouting training manuals and methods for both youth and adults.

Hillcourt was born in , in 1900 under the name Vilhelm Hans Bjerregaard Jensen. Around 1930, he changed his name by anglicizing "Vilhelm", dropping "Jensen", and translating "Bjerregaard" into "Hill-court". The youngest of three sons of a building contractor, his first published work was a poem about trolls and elves, printed by an Aarhus newspaper when he was nine years old. For Christmas 1910, Hillcourt's brother gave him a Danish translation of Baden-Powell's "". Baden-Powell, who was the founder of the Scout movement, and Hillcourt would later work together. He went on to earn the highest rank in Danish Scouting, Knight-Scout, at age 17. After moving to America, he also earned the BSA's highest rank, Eagle Scout; until the 1960s, adults could earn merit badges and ranks. He was selected to represent his troop at the in Olympia in 1920 where he first met Baden-Powell.

While Hillcourt studied in , he became more involved in Scouting. As a , he became a Scoutmaster, national instructor, writer and then the editor for the Danish Scouting journal. He also wrote his first book, "The Island", recounting his early Scouting experiences. Hillcourt's troop was set to participate in the in when he obtained a position as a covering the jamboree. He later became the managing editor of the paper's Sunday magazine.

After deciding to see Scouting around the world and to return home with the best ideas, Hillcourt worked his way through and and then arrived in the in February 1926.

Hillcourt worked at a BSA camp at Bear Mountain in , in 1926, where he became an instructor in American Indian dance.

Hillcourt was tasked to write a new manual for Scoutmasters in 1934 and worked with his good friend and colleague , the national program director of the BSA. He and his wife moved to a house in to be near Schiff Scout Reservation,

To encourage the creation of Rovering in the U.S., travelled from the UK to oversee a course in May 1936 at Schiff. Hillcourt was a participant in that first course and four days later, he was the senior patrol leader for the second course. He received his Wood Badge beads in 1939 and was appointed as the deputy camp director for Wood Badge. After , Wood Badge was revived and Hillcourt was the Scoutmaster for a test course at Schiff and the first standard course at . As the national director of training, Hillcourt wore five Wood Badge beads, a tradition that has been discontinued.

Hillcourt retired from the BSA on August 1, 1965. In 1971, he and Grace finally completed the world tour he had started in 1926; along the way they attended the in Fujinomiya, Japan. Grace Hillcourt died in 1973.

The BSA had introduced the Improved Scouting Program in 1972, along with a new edition of the "Boy Scout Handbook". [cite book |author=Peterson, Robert W. |title=The Boy Scouts: An American Adventure |publisher=American Heritage | year=1984 |isbn=0-8281-1173-1 ] Many of the changes were intended to expand Scouting to a broader base of youth and to make Scouting more "in tune with the times". Many Scouters, including Hillcourt, were critical of the new program changes, exclaiming that the de-emphasis on traditional outdoor skills had taken the "outing out of Scouting". To remedy this situation, Hillcourt convinced Chief Scout Executive that a new handbook was needed. Hillcourt then came out of retirement and spent a year writing and editing the 1979 edition of "The Official Boy Scout Handbook", returning to the focus of . In addition, he helped to develop the All Out for Scouting program that launched the return to the old standards.

Hillcourt was recognized for his service to youth by the BSA with the on May 19, 1978.

Hillcourt died in Europe while on a Scouting tour in 1992. He is buried with his wife Grace in St. Joseph's Cemetery in Mendham, New Jersey at Row 8, Block I.

Hillcourt was one of the BSA's most prolific writers. He wrote numerous articles for "" and "Scouting" magazines, including a column aimed at patrol leaders under the by-line of "Patrol Leader Green Bar Bill". At least 12,610,000 copies of his three editions of the "Boy Scout Handbook" were printed.
*(1925) "The Island"
*(1929) "Handbook for Patrol Leaders"
*(1933) "The 1933 Scout Jamboree Book" with James E. West