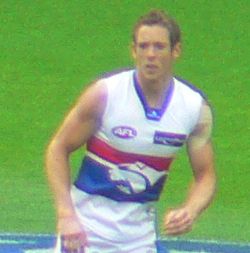 Robert Murphy (born 16 July 1982) is an AFL player who was drafted to the with pick 13 in the 1999 . Murphy has played many positions throughout his career but during the 2005 season he cemented a place as a small . He kicked 33 goals from this position and his overhead marking and leading ability were invaluable to the team. As part of the leadership group he led his younger team mates by great example across the line.

On 26 May 2006 Murphy injured his knee during a horrible collision in the Bulldogs' 34-point loss to Collingwood. This injury caused him to miss the remainder of the 2006 season. After successful reconstruction, he returned to action in the 2007 NAB Cup series in February 2007.

He currnetly lives in the Melbourne suburb of Fitzroy and is a columnist for newspaper, where he writes a weekly coulmn.