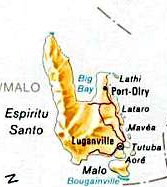 Espiritu Santo (from the Spanish "espíritu santo," "", sometimes called just Santo) is the largest in the nation of , with a surface area of 3955.5 km². It belongs to the of the New Hebrides in the Pacific region of . It is in the of Vanuatu.

The town of , on Espiritu Santo's southeast coast, is Vanuatu's second-largest settlement and the provincial capital. Roads run north and west from Luganville but most of the island is far from the limited road network.

The Portuguese explorer , working for , established a settlement in 1606 at Big Bay on the north side of the island. Espiritu Santo takes its name from Queirós, who named the entire island group "La Austrialia [ No, not a typo! See for example, Estensen, M. (2006) "Terra Australia Incognita; The Spanish Quest for the Great South Land". Allen & Unwin, Australia ISBN 978 1741750546 ] del Espíritu Santo". During the time of the British&ndash;French Condominium, , on the northeast coast, was the site of the British district administration, while Segond, near Luganville was the French district administration. [cite web|url=http://www.britannica.com/eb/topic-350921/Luganville|title=Luganville|work=Encyclopædia Britannica|accessdate=2007-10-23]

During , particularly after the Japanese attack on Pearl Harbor, the island was used by Allied forces as a military supply and support base, naval harbor, and airfield. The presence of the Allies later contributed to the island's diving tourism, as the United States dumped most of their equipment and refuse at what is now known as 'Million Dollar Point'. [cite web|url=http://www.vanuatu.net.vu/tourism/to-do/Diving/Dive-Santo-Vanuatu.shtml|title=Diving Santo|work=Vanuatu Online|accessdate=2007-10-23]

Between May and August 1980 the island was the site of a rebellion during the transfer of power over the colonial from the condominium to independent Vanuatu. ' movement, in alliance with private French interests and backed by the Phoenix Foundation and American libertarians hoping to establish a tax-free haven, declared the island of Espiritu Santo independent of the new government. A was proclaimed. British and a unit of the French "" were deployed to the Vanuatu's capital island but did not invade Espiritu Santo as the soon-to-be government had hoped. The troops were recalled shortly before independence. Following independence Vanuatu, now governed by Father , requested assistance from , whose forces invaded and restored order on Espiritu Santo.

James Michener was stationed here during World War II and it is the real life setting of Tales of the South Pacific.

Santo, with many wrecks and reefs to be explored, is a very popular tourist destination for divers. Champagne Beach draws tourists with its pink sand and clear waters. The "Western Side" of the island contains many caves which may be explored, and cruise ships often stop in at .

The local people survive by supporting the tourist trade, by cash-crop farming (s) or by subsistence farming and fishing.

Most Santo people are Christians. The largest church groups on the island are the Church of Vanuatu, the and the (). Also active are the Church, the , the , and others. However, in many villages, particularly in Big Bay and South Santo, the people are "heathen", a term that in Vanuatu has no pejorative connotation &mdash; it simply denotes someone who has not embraced Christianity. ary beliefs of a more modern sort are found among followers of the movement based in .

For almost all Santo people custom plays a large part in their lives, regardless of their religion. The chief system continues strongly in most areas.

The people of Santo face some health problems, especially , and a rising number of cases. Although there is a hospital, most locals consult either their own or medical clinics set up by western missionaries. is the popular drug of the island, although alcohol is becoming more prevalent. With the rising number of adults using alcohol, there is a rising crime rate, especially involving violence toward women, and tribal warfare.

Santo is home to a number of cattle farms (including the famous Belmol Cattle Project, originally established by French settlers) and exports much of its beef to Japan, Australia and other Pacific Island countries.

Besides beef, tin fish and rice, bought in town, Santo has many foods that locals take for granted and that tourists enjoy as delicacies. Among these are sweet pineapples, mangos, island cabbage, flying fox and , as well as local nuts such as natapoa and the sweet fleshy-fruit nouse. There is a market in Luganville for groceries and many roadside stores, often run by Chinese.

Many local people still rely on subsistence farming for their food. Most villages have a garden that is tended by men and women alike. Taro and yam are commonly grown in these gardens, and are mainstays of the local diet.