The second season of American Idol premiered on January 21, 2003 and continued until May 21, 2003. The title of show was shortened from American Idol: The Search for a Superstar of Season 1 to just American Idol.[1] Brian Dunkleman quit after the first season,[2] and Seacrest therefore became the lone host in Season 2 as well as all subsequent seasons. Kristin Holt was a special correspondent.

Studdard released his coronation song "Flying Without Wings" after the show and reached number two in U.S. Hot 100. Aiken also released a single with "This Is the Night", written by Chris Braide, Aldo Nova and Gary Burr. It became the first non-winning contestant to have a Billboard Hot 100 number-one It was the biggest US single of 2003, selling over one million copies and reaching six times platinum status in Canada as well as number 1 in New Zealand.[3]

Auditions were held in the fall of 2002 in the following cities:[4]

The number of auditioners increased significantly after the success of the Season 1,[14][15] and arenas and stadia started to be used to hold the first auditions from this season onwards when the Rose Bowl in Pasadena was used this season instead of the hotel originally planned.[5][16] Around 70,000 attended the auditions this season and 234 were selected to proceed on to the Hollywood round. Radio DJ Angie Martinez was originally signed up as a fourth judge,[17] but quit after a few days, stating that "it became too uncomfortable for me to tell someone else to give up on their dream".[18] Paula Abdul was absent from the Atlanta audition.

At the Miami auditions, one failed auditioner was Edgar Nova who,[19] after being rejected, tried to get back again and had to be escorted off the premise. Nova then auditioned in Los Angeles, but with a different hairstyle to avoid recognition, and was again unsuccessful. He also tried further in Season 3 and 4.

Another auditioner named Bryan Washington auditioned in Atlanta, Georgia, and made it to Hollywood, but did not make it into the top 32. He was also overweight at the time of his American Idol audition, and later became a contestant on The Biggest Loser (Season 4.)

The contestants performed in a series of rounds and number of contestants trimmed in each round. In the first round they performed a song, in the second round they were asked to compose a melody for one of five set of lyrics, and 80 remained after this round. In the third round the contestants were separate into the girls and boys and they performed in small groups. They chose a song from "Superstar", Seal's "Kiss from a Rose", Barry Manilow's "Tryin' to Get the Feeling Again", Freda Payne's "Band of Gold", and Dionne Warwick's "(You'll Never Get to Heaven) If You Break My Heart". During the group performance, Corey Clark, who was later to claim a relationship with Paula Abdul, sang to Paula directly and kissed her hand. 48 contestant were left at the end of this round.

In the last round each contestants performed solo. After their performances, the contestants were then divided into 3 group of 16 and placed in separate rooms. One group was eliminated, and 32 contestants proceeded on to the semi-final rounds.

The format changed slightly in Season 2; instead of three groups of 10, the semi-finalists were grouped into four groups of 8. The singers performed solo in a new improved stage with piano accompaniment by Michael Orland, and the performance pre-taped. There were no live audience although family members of contestants were present in the Red Room where the contestants were placed.

The results of the public vote were announced live the next day. From each group, two were selected to proceed on to the top 12, and those selected reprised their performance in the result show. Nine of those who failed at any of previous stages (including the Hollywood rounds and the initial regional auditions) were given one more chance to perform again in the wild-card show. Each of the three judges put one contestant from the wild-card group through to the top 12, with the final one selected by the public vote. 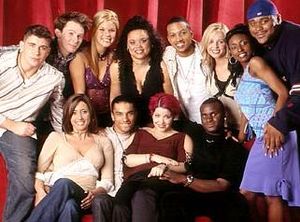 In this season, guests were introduced as celebrity judges, some of whom who may also act as a mentor in for the week they were on.

During Top 9, it was announced that Corey Clark had been disqualified.

In most weeks the bottom vote-getter performed his or her song again after their elimination was announced, but at Top 5 and Top 9 both the bottom 2 vote-getters performed their song.

Note 1: Corey Clark was later disqualified due to his controversy.

Note 2: The song was performed twice. The Iraq War had earlier been announced.

Top 9 - "A Night to Remember" by Shalamar and "Boogie Wonderland" by Earth, Wind & Fire/
The Emotions

Group1 - "What the World Needs Now Is Love" by Jackie DeShannon

Justin Guarini - "I Saw Your Face"

The two night season finale was held at the Gibson Amphitheatre in Los Angeles, California.

Ruben Studdard emerged as the winner with Clay Aiken as a very close runner-up. Out of 24 million votes recorded, Studdard finished just 134,000 votes ahead of Aiken, and the smallness of the margin of victory made this result highly controversial.[22]

* None of the bottom 3 were eliminated on the April 2nd results show due to the disqualification of Corey Clark on previous day.

The finale vote had been controversial due to the smallness of the margin. Ryan Seacrest also added fuel by mistakenly announcing the difference in vote count first as 13,000, then 1,335, but eventually revealed later to be around 130,000.[23] There was much discussion in the communication industry about the phone system being overloaded, and that more than 150 million votes were dropped, making the voting results suspect.[24] In an interview prior to the start of the fifth season, executive producer Nigel Lythgoe revealed that Aiken had led the fan voting from the wild card week onward until the finale.[25]

A mini-controversy emerged after the finale when Simon Cowell alleged that Clay Aiken knew the results of the show nearly an hour before they were announced on-air because he had snuck a peek at Ryan Seacrest's handheld cue card backstage. On Larry King Live the next day, Aiken admitted he had indeed seen the card but could not read it in the backstage light; however, he had seen enough to determine that the name on it was too long to be "Clay Aiken". On the live broadcast, Aiken can be seen turning his body to face Studdard and whispering something in his ear right before the results were announced, a visual clue fans took as confirmation that Aiken had somehow found out he was not the winner.

There was controversy when contestant Frenchie Davis was disqualified from the competition after topless photos of her surfaced on the Internet. Shortly afterwards, she landed a role in the Broadway musical Rent. The producers of the show added a Christian marketing team to protect and build faith viewers[clarification needed] with faith guru Rick Hendrix after the Frenchie Davis incident.

Corey Clark was also disqualified from the show because, according to the Idol producers, Clark had a police record he had not disclosed to the show. However, in 2005, contestant Corey Clark alleged in an interview on ABC's Primetime Live and in a book, They Told Me to Tell the Truth, So... The Sex, Lies and Paulatics of One of America's Idols, that he and judge Paula Abdul had an affair while he was on the show and that this contributed to his removal.[26] Clark also alleged that Abdul gave him preferential treatment on the show and tips on song choice. A subsequent investigation by an independent counsel hired by Fox "could not corroborate the evidence or allegations provided by Mr. Clark or any witnesses".[27] Paula Abdul was therefore considered exonerated but an "enhanced non-fraternization policy" was put in place after the investigation.[27]

Trenyce was also found to have been arrested on felony theft charge,[28] however Nigel Lythgoe considered her offence to be minor and one which she has been honest about, therefore "warranted no concern regarding her participation in the show."[29]

During the Top 10, a problem with the telephony system resulted in some votes not being registered for Julia DeMato, however, Fox insisted that the mistake would not have made any difference in Julia DeMato being voted off.[29]

During the course of the contest, Studdard became known for wearing 205 Flava jerseys representing his area code; when asked about them early in the season, Studdard told Seacrest that he was "just representing 205". Shortly after the end of the contest, Studdard sued 205 Flava, Inc. for $2 Million dollars for using his image for promotional purposes. 205 Flava responded by alleging that Studdard had accepted over $10,000 in return for wearing 205 shirts, and produced eight cashed checks to validate their claim. The allegations, if true, were a clear violation of the American Idol rules.[30] The lawsuit was settled out of court.[31]

Some questions were raised about the participation of Josh Gracin, who was then in the Marine Corps, in American idol during the time of the Iraq War.[32] He later missed both the finale performance night as well as the Idol tour that year after being recalled to duty by the Marines.[33]

Some speculation about Vanessa Olivarez' dismissal and treatment by American Idol surfaced in 2007.[34] During the show, Olivarez took part in a scripted joke where, after Seacrest had asked Olivarez to read a cue card taking the viewers to a commercial, Olivarez would reply by saying, "Ryan, I'm a real artist, not a performing monkey like you, so why don't you read your own script?"[35] However, viewers booed, and Olivarez was voted off afterwards, a result of what some thought to be negative public perception of her due to the joke. It was suggested that she was deliberately ousted because she had come out as a lesbian to other contestants.[36] She had also posed nude for an ad campaign for the animal rights group PETA after she was voted off.[37] Olivarez was the only finalist omitted from the Season 2 CD, and she was not chosen for the tour after Joshua Gracin was recalled to the Marines.[38]

The number of average viewers per episode this season was 21.7 million, an increase of 71% over season 1.[39] Its Wednesday episodes finished as the third most-watched show of the year averaging 21.93 million, and the Tuesday episodes fifth at 21.56 million.[40] The show ranked second in the coveted 18/49 demographic for the 2002-2003 season.[41] This season's finale episode still ranks as the most-watched single episode in Idol history at 38.1 million, the finale night itself averaged 33.7 million when the pre-show special is taken into consideration. The show also helped Fox become the season's number three network in total viewers for the first time.[42]