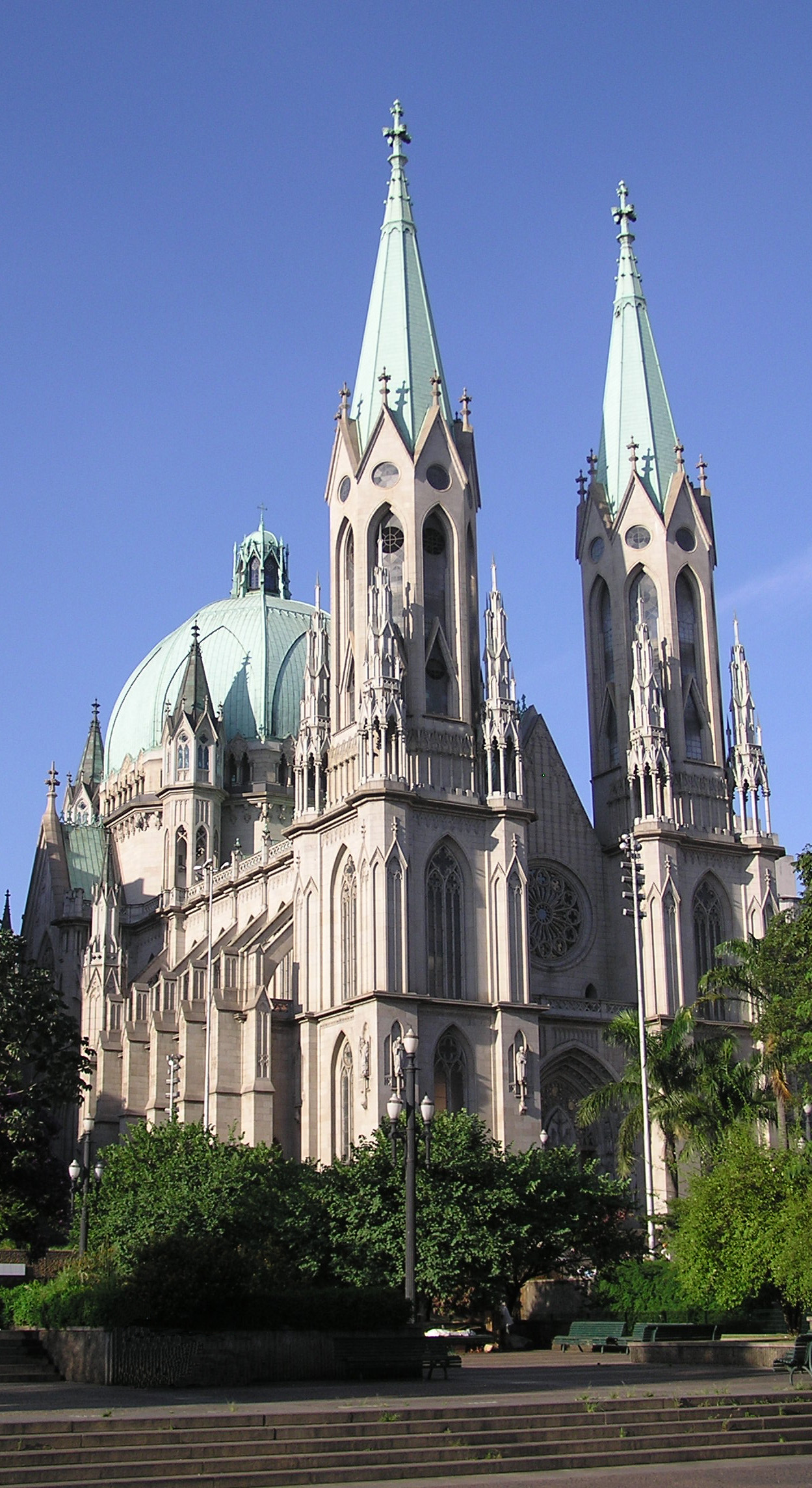 The São Paulo Sé Cathedral (Portuguese: Catedral da Sé de São Paulo) is the of the city of , in . Its construction, in Neo-Gothic style, began in 1913 and did not end until four decades later.

The history of the Cathedral of São Paulo goes back in time to 1589, when it was decided that a main church (the "Matriz") would be built in the small village of São Paulo. This church, located on the site of the present cathedral, was only finished around 1616. São Paulo became seat of a in 1745, and the old church was demolished and substituted by a new one, built in style, which was finished around 1764. This modest church would be the Cathedral of São Paulo until 1911, when it was demolished.

The present cathedral was built under Duarte Leopoldo e Silva, the first of São Paulo. The works began in 1913 on the site of the demolished colonial cathedral following the project of German architect , who designed a structure. Works proceeded slowly and the inauguration of the new Cathedral happened only in 1954, with the towers still unfinished, but in time for the celebration of São Paulo's Fourth . The towers would only be completed in 1967.

After a long period of decay, the Cathedral underwent a complete renovation between 2000 and 2002. Apart from repairing the building, many pinnacles over the nave and towers were completed. The original 1912 construction plans were found inside the building, allowing for a faithful restoration.

The Cathedral is the largest church in São Paulo: 111 metres long, 46 metres wide, with the two flanking towers reaching a height of 92 metres. The Cathedral is a church with a five-d and a that reaches 30 metres over the crossing. Although the building in general is Neo-Gothic, the dome is inspired by the dome of the .

The Cathedral has a total capacity for 8,000 people. More than 800 tons of rare were used in its completion. The inner capitals are decorated with sculpted Brazilian elements like branches, s, s, etc.

The , located below the main , is very large and can be considered a subterranean church in its own right. It is decorated with marble sculptures by Francisco Leopoldo e Silva depicting the history of Job and .

The crypt has the tombs of all bishops and archbishops of São Paulo. Of special note are the tombs of two important historical figures: father Diogo Feijó and the cacique Tibiriçá. Feijó was of Brazil during the minority of Emperor Pedro II. Tibiriçá was the (chieftain) of the Guaianaz tribe who, in the 16th century, welcomed the first to the Piratininga Plateau and whose aid made the foundation of São Paulo possible.

The cathedral's organ, built in 1954 by the Italian firm Balbiani & Rossi, is one of the largest in . It has five keyboards, 329 stops, 120 registers, and 12,000 pipes, the mouths of which display hand-engraved reliefs in Gothic style.

* [http://www1.folha.uol.com.br/folha/especial/2002/catedraldase/ Renovation of São Paulo Cathedral in the "Folha de São Paulo" newspaper.]
* [http://skyscraperpage.com/cities/?buildingID=10918 Page of the cathedral in SkyscraperPage]