Shastri Pandurang Vaijnath Athavale (Marathi: शास्त्री पांडुरंग आठवले) (October 19, 1920 – October 25, 2003), also known as Dada-ji (Marathi: दादा), which literally translates as elder brother in Marathi, was an Indian philosopher, spiritual leader, social reformer[2] and Hinduism reformist, who founded the Swadhyay Movement and the Swadhyay Parivar organization (Swadhyay Family) in 1954,[3] a self-knowledge movement based on the Bhagavad Gita, which has spread across nearly 100,000 villages in India,[4][5] with over 5 million members.[6] He was also noted for his discourses or "pravachans" on Srimad Bhagawad Gita and Upanishads.

He was awarded the 'Templeton Prize for Progress in Religion' in 1997[7] and the Ramon Magsaysay Award for Community Leadership and India's second highest civilian honour, the Padma Vibhushan in 1999.[8]

Shastri Pandurang Vaijnath Athavale was born on October 19, 1920 in the village of Roha in Maharashra (konkan) India. He was one of 5 children of Sanskrit teacher Vaijanath Athavale and Parvati Athavale.[9]

When Athavale was twelve years old, his grandfather set up an independent course of study for the young boy with individual tuition. Thus, Athavale was taught in a system very similar to that of the Tapovan system of ancient India. In 1942, he started to give discourses at the Srimad Bhagavad Gita Pathshala, a centre set up by his father in 1926.[9]

Athavale read diligently in the Royal Asiatic Library for 14 years, reading and digesting every non-fiction literature (ranging from Marx's philosophy to Whitehead's writings to ancient Indian philosophy). In 1954, he attended the Second World Philosophers Conference, held in Japan. There, Athavale presented the concepts of Vedic ideals and the teachings of the Bhagavad Gita. All the participants deeply impressed by his ideas and wanted evidence of such ideals being put into practice in towns across India. A Dr. Wilson Compton was impressed with Athavale's ideas and offered him a post in the US, where he could spread his ideas. Athavale politely declined,[9] saying that he had work to accomplish if he wanted to show the world a model community peacefully practicing and spreading the divine Vedic thoughts and the message of the Bhagavad Gita. 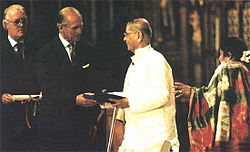 Swadhyay Movement is a philosophy found all over the world. "Swadhyayees", as the divine family members of the Swadhyay Pariwar are called. Swadhyay is a family where individuals come from all parts of society, regardless of social strata, and are considered divine brothers and sister, equal in the eyes of God. Many Swadhyayees who continue Athavale's work in spreading his ideas throughout India and to other parts of the world are known as "krutisheels" or people of action. Over the years, his followers (Swadhyayees), have taken his message of love for God and God's love for all to people across caste, social and economic lines to about 100,000 Indian villages, and started various cooperative farming, fishing and tree-planting projects in the spirit of collective, divine work of the Lord. Swadhyayees have never reached out to fellow brothers in sister in the name of converting or even attracting to Swadhyay, but in the spirit of or meeting and establishing relationships, and taking the message of the universal Gita to every man. Today, Swadhyay has spread to numerous countries in the Caribbean, the Americas, Asia, and even Africa. The divine parivar, or family, has extended to many millions. As Dadaji always dreamed of, Swadhyay is creating a "Universal brotherhood under the Divine Fatherhood of God." [10]

On December 20–21 of 2010, 3 million Swadhyayees gathered in Kharghar, Mumbai, India, to celebrate late Pujya Dadaji's 90th birthday. The program, "Dadaji Namastubbyam" (respects to Dadaji) was held on a large, cleared ground. Swadhyayee families from South Africa, Hong Kong, Europe, America, and all parts of India gathered to pay their respects and to celebrate Athavale's 90th birthday. To begin the program, a youth celebration was held. The performance featured a dance by 83,000 youth, who creating unique formations with their multicolored shirts. The dance was recorded by a remote controlled helicopter, and displayed on 2 massive LED screens and more than 10 big projector screens. This was followed by a speech from Jayashree "Didiji" Talwalkar, the daughter of Pandurang Shastri and head of Swadhyay Parivar.

Revered as an Activist Philosopher, Dadaji passed away at 12:30 pm on October 25, 2003, in at Khetwadi in south Mumbai, India.[11] He was 83 years old at the time of his demise. He was cremated on the evening of October 26 at Tatvagnyaan Vidyapeeth, Ghodbunder in Thane district, where around 10,000 people were present.[12] Subsequently his ashes were immersed at Ujjain, Pushkar, Haridwar, Kurukshetra, Gaya, Jagannath Puri, and lastly at Rameswaram.[13]

Honored as Chief person in sectional and general meetings of Second World Conference of Religion and Philosophy held in Shimizu city near Tokyo, Japan.

Invited as the chief guest at the fifth centenary celebrations organized by German government and German universities Trier, Germany, in honor of the 15th Century Saint-philosopher Nicholos of Cusa.

Internationally honored when the translation of “Vision of God “from Latin to German was dedicated to him.

Received Indira Gandhi Priyadarshini Award [14] conferred by National Westland Development Board for 'Temple of Trees' created under the banner of Vaijnath Bhavdarshan Trust.

Received the first "International Award for Progress in Religion" conferred by Diwaliben M. Mehta Trust in March, 1993 for outstanding contributions towards inter-religious amity and scientific approach to religion.

Honored by Pune Municipal Corporation in recognition of his dedicated services to human development.

Unanimously honored by the entire legislative assembly of Gujrat State, India, in recognition of his invaluable contributions to the development of humanity in general and the people of Gujrat state in particular.

Sir John Templeton Foundation conferred the most prestigious Templeton Prize [16] for 'Progress in Religion' for originality, effectiveness, creativity and progress in religion and spirituality.

Honored by Saurashtra University, by conferring “Doctorate of Letters. (D.Lit.)”

Honored by Government of India by awarding the prestigious Padma Vibhushan [17] title.

“Lok Gaurav Puraskar” has been announced for exceptional work done in the spiritual and religious spheres in the society.

Giants Internationals, Mumbai, awarded Rev. Dadaji for his outstanding contributions in the field of social services.

Tatvagnyaan Vidhyapeeth is an institution in which Dadaji, himself, often gave discourses to the many youths those studied there. The youths study a broad variety of religious and spiritual subjects and live as they would have done in a "tapovan" thousands of years ago.

In 1991, noted film director, Shyam Benegal, directed a film, Antarnaad (The Inner Voice), based on the Swadhyay Movement of the Swadhyay Parivar, with Shabana Azmi and Kulbhushan Kharbanda in lead roles.[19] In 2004, director, Abir Bazaz made a documentary, Swadhyaya, on the life and works of Pandurang Shastri Athavale.[20][21]