:"This article is about the U.S. Senator from New Hampshire. For his grandfather, the New Hampshire state senator and major general (1734-1799), see ."Infobox Senator
name=Joseph Cilley 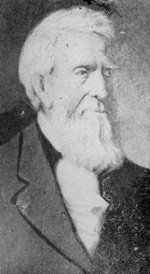 Cilley was born in , the son of Greenleaf Cilley and his wife Jane Nealy. He was also the grandson of Revolutionary War officer Joseph Cilley after whom he was named. He was the nephew of and brother of . Cilley was educated at Atkinson Academy and joined the army to fight in the as an officer in the 21st Infantry Regiment seeing action at the and . Joseph Cilley was severely wounded at the , he was shot through the leg by a musket ball causing a compound fracture. He attained the brevetted rank of , was the quartermaster of the in 1817, and the division inspector in 1821.

After his military service Joseph Cilley became an aide-de-camp to Governor Benjamin Pierce in 1827. He was then elected as a Democrat to the to fill the vacancy caused by the resignation of and served from , 1846 to , 1847. He was an unsuccessful candidate for reelection in 1846, after which he retired to his farm in Nottingham. He was interred in the Joseph Cilley Burying Ground in Nottingham Square.