Silistra (Bulgarian: Силистра, pronounced [siˈlistrɐ], historically Bulgarian: Дръстър, Drastar [ˈdrɤstəɐr]) is a port city of northeastern Bulgaria, lying on the southern bank of the lower Danube at the country's border with Romania. Silistra is the administrative centre of Silistra Province and one of the important cities of the historical region of Southern Dobrudzha. As of February 2011, the town has a population of 35,607 inhabitants.[1]

Silistra is a major cultural, industrial, transportation and educational center of north-eastern Bulgaria. There are many historical landmarks including a Roman tomb, remains of the Medieval fortress, an Ottoman fort, and an art gallery.

Silistra is situated in the north eastern part of Bulgaria on the right bank of the Danube river. It is located in the Bulgarian part of Dobrudzha. 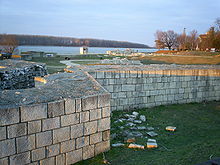 The Romans built a fortress in 29 AD on the site of an earlier Celtic settlement and kept its name, Durostorum (or Dorostorum). It became an important military center of Moesia, and grew into a city at the time of Marcus Aurelius. In 388, Durostorum became the seat of a Christian bishopric and a center of Christianity in the region. Roman general Flavius Aëtius was born in the town in 396. After the Roman Empire split into the Eastern and Western empires, the town (known as Δουρόστολον, Durostolon in Byzantine Greek) became part of the Byzantine Empire. As part of the Bulgarian Empire Durostolon then became known as Drastar by the Bulgarians in Medieval times. 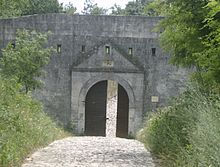 The fort of Silistra 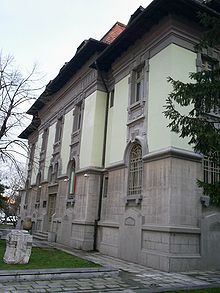 Around the end of the 7th century, the town was incorporated in the First Bulgarian Empire and the bishop of Drastar was proclaimed the first patriarch of Bulgaria. In 895 during the Bulgarian-Hungarian War of (894-896), the Hungarians who acted as Byzantine allies besieged the Bulgarian army under the personal command of Simeon I the Great in the fortress of the town but were repulsed.[10] On the next year the Hungarians were decisively defeated in the battle of Southern Buh.

The town was captured by the forces of Sviatoslav I of Kiev in 969, but two years later it was besieged by the Byzantines during the Battle of Dorostolon. Having been ceded to the Byzantines, it was renamed Theodoropolis, after military saint Theodore Stratelates, who is said to have come to Emperor John I Tzimiskes' aid during the battle. In 976, Tsar Samuil restored Bulgarian rule in the region until 1001, when it was once again incorporated within the bounds of the Byzantine Empire.

In 1186, after the Rebellion of Asen and Peter, the town became part of the Second Bulgarian Empire.

In 1279 Emperor Ivailo was besieged by the Mongols in Drastar but after three-month siege the Bulgarians managed to break through.[11] The town remained part of the Empire until the Ottoman conquest of Bulgaria in 1396. Throughout the Middle Ages, Drastar was among Bulgaria's largest and most important cities.

During Ottoman rule, Silistra (Silistre in Ottoman Turkish) was part of Rumelia Province and was the administrative centre of the Silistra district (sanjak). This district was later upgraded to become the Silistra Province that stretched over most of the western Black Sea littoral.

The town was captured by Russian forces numerous times during several Russo-Turkish Wars and was besieged between 14 April and 23 June in 1854 during the Crimean War. Around that time Namık Kemal wrote his most famous play, Vatan Yahut Silistre ("Fatherland; or, Silistra"), a drama evolving around the siege of Silistra in 1854, in which he expounded on the ideas of patriotism and liberalism. It was staged first on 1 April 1873 and led to his exile to Famagusta.

The Ottoman Silistra Province was reduced in size, as the districts of Özi and Hocabey and the region of Bessarabia were ceded to the Russian Empire between the end of the 18th century and the beginning of the 19th century, and the Edirne Province was established from its south regions in 1830. Finally, Silistra Province merged with the provinces of Vidin and Niš in 1864 and became Danube Province in 1864. Silistra was downgraded to a kaza centre in Ruse district in this province in the same year.

Between 1819 and 1826, Eliezer Papo — a renowned Jewish scholar — was the rabbi of the community of Silistra, making this town famous among observant Jews. (Up to the present, his grave is a focus of pilgrimage, some pilgrims flying especially from Israel and even from Latin America to Bulgaria for that purpose.[12])

In 1878, following the Russo-Turkish War of 1877–1878, Silistra was included in the newly autonomous Principality of Bulgaria, which became the Kingdom of Bulgaria in 1908.

In May 1913, after unsuccessful Bulgarian-Romanian negotiations in London, the two countries accepted the mediation of the Great Powers, who awarded Silistra and the area in a 3 km radius around it to Romania at the Saint Petersburg Conference. Following the Second Balkan War, the Treaty of Bucharest (1913) granted Silistra and the whole of Southern Dobruja to Romania when the city became called Dârstor by the Romanians. Although Bulgaria regained the town during World War I with the Treaty of Bucharest (1918), in which Romania surrendered to the Central Powers (including Bulgaria), the Treaty of Neuilly (1919) following World War I returned it to Romania. Silistra remained a part of Romania until the Axis-sponsored Treaty of Craiova of 1940, when the town once again became part of Bulgaria, a transfer confirmed by the Paris Peace Treaties of 1947. Silistra was center of Durostor County between 1913–1938, except Bulgarian rule between 1916–1918, and part of Ţinutul Mării between 1938-1940 during Romanian rule.

Silistra Knoll on Livingston Island in the South Shetland Islands, Antarctica is named after Silistra, as is the Dristor neighbourhood of Bucharest.

"Silistra" is also the name of a fictional planet in Janet Morris' book High Couch of Silistra (1977).