Clear script (or Oirat clear script, Todo bicig, or just Todo) (Mongolian: Тодо бичиг, todo bichig) is a Mongol alphabet created in 1648 by the Oirat Buddhist monk Zaya Pandita Oktorguin Dalai for the Oirat Mongol language.[1][2][3] to It was developed on the basis of the traditional Hudum Mongolian alphabet with the goal of distinguishing all sounds in the spoken language, and to make it easier to transcribe Tibetan and Sanskrit.

As mentioned above the clear script was developed as a better way to write Mongolian, specifically of the Western Mongolian groups of the Oirats and Kalmyks.[3] The practicality of clear script lies in the fact that it was supremely created in order to dissolve any ambiguities that might appear when one attempts to write down a language. Not only were vowels assigned symbols, but all existing symbols were clarified. All of the 'old' symbols, those that did not change from the previously used script, were assigned a fixed meaning, based mostly on their Uyghur ancestors.[2] New symbols and diacritical marks were added to show vowels and vowel lengths, as well as distinguish between voiced and unvoiced consonants.[3] There were even some marks which denoted between sounds like ši and si which are not so important for words written in the Oirat language of clear script, but are useful for the transcription of foreign words and names.[2]

The clear script was used by Oirat and neighboring Mongols, mostly in the late 17th and early 18th centuries.[2] The text was widely used by its creator and others to translate Buddhist works so that they might better spread the Buddhist religion throughout western Mongolia. Though the script was useful for translating works from other languages, especially Tibetan, it was also used more informally, as evidenced by some letters from the late 1690s.[2]

The script was used by Kalmyks of Russia until 1924, when it was replaced by the Cyrillic alphabet. In Xinjiang, China the Oirat people still use it, although today Mongolian education is taught in Chahar Mongolian all across China.

This script is a vertical script, as was its 'vertical Mongolian' parent script. Letters and diacritics are written along a central axis. Portions of letters to the right of the axis generally slant up, and portions to the left of the axis generally slant down. The only signs that do not follow these rules are the horizontal signs for S Š and part of Ö.[2] Words are delineated by a space, as well as different letter forms. Though most letters only come in one shape, there are some letters that look different depending on where in the word they occur, whether they are initial, medial, or final.[3]

There is an alphabetic order in clear script, as in other related scripts, but the order for clear script is not the same as its Mongolian parents or Aramaic ancestors.[2] 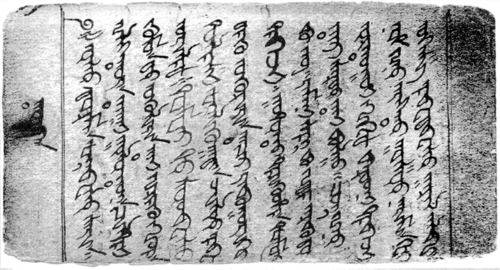 An Oirat manuscript written in the 19th century.