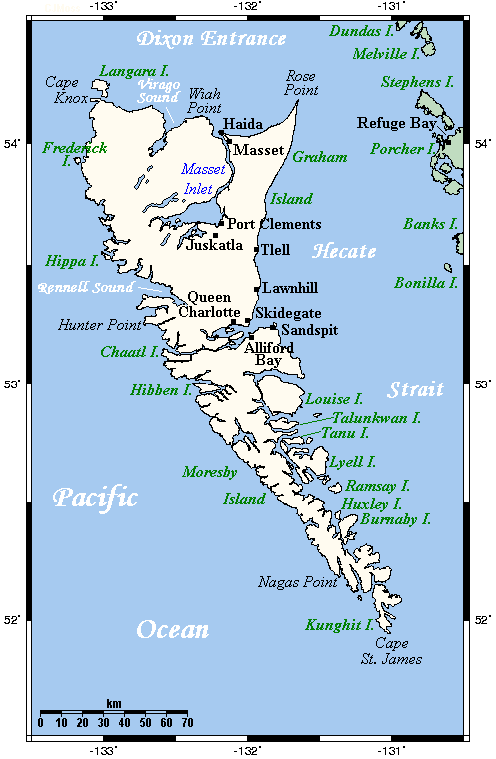 The Queen Charlotte Islands [BCGNIS|38615] or Haida Gwaii ("Islands of the People"), and originally in Haida, Xhaaidlagha Gwaayaai ("islands on the edge of the world"), are an off the northwest coast of , , consisting of two main islands, in the North, and in the south, and approximately 150 smaller islands with a total landmass of 10,180 km² (3,932 sq mi). Other major islands include Langara, Louise, Lyell, Burnaby, and The islands are separated from the British Columbia mainland to the east by . lies to the south, across Queen Charlotte Sound, while the U.S. state of is to the north, across the .

Some of the land, including the homelands of some of the peoples, is jointly protected under federal and Haida legislation as . The s are home to an abundance of , including the largest subspecies of black bear ("Ursus americana carlottae") and the subspecies of "Mustela erminea haidarum". The and are introduced species that have become abundant.

The cash economy is blended, including art and natural resources, primarily and . Furthermore, service industries and government jobs provide about one-third of the jobs, and has become a more prominent part of the economy in recent years, especially for and s, , , and .

At the time of colonial contact, the population was roughly 10,000 to 60,000 peopleFact|date=May 2008, residing in several dozen towns and including slave populations drawn from other tribes. Ninety percent of the population died during the 1800s from ; other diseases arrived as well, including , , and , affecting many more inhabitants. By 1900, only 350 people remained. Towns were abandoned as people left their homes for the towns of Skidegate and Masset, cannery towns on the mainland, or for Vancouver Island. Today, some 5000 people live on the islands. Indigenous people (Haida) live throughout the islands, and are concentrated around Skidegate and Old Masset, each with a population of about 1000. Anthony Island and the town of were made a in 2006; in the decision, the decline in population wrought by disease was referenced when citing the 'vanished civilization' of the Haida. [ [http://whc.unesco.org/archive/advisory_body_evaluation/157.pdf UNESCO World Heritage Site: Justification, 1981] ]

The name Haida Gwaii is of modern coinage and was created as an alternative to the colonial name "Queen Charlotte Islands", to recognize the history of the Haida Nation. "Haida Gwaii" means "our land", while "Haida" on its own means not only "us" but also "people".

The archipelago seems to have escaped much of the glaciation of the last . That, and its subsequent isolation from the mainland, has produced what some call the "Galápagos of the North," a unique biological zone with many endemic animals and plants. Its climate, like that of the rest of the British Columbia and Alaskan coast in the area, is moderated by the , and features considerable precipitation and relatively mild temperatures throughout the year.

The , the largest on Graham Island, was the site of (meaning "ancient tree"), the only naturally occurring golden in the world. The Golden Spruce was sacred to the people, as well as a popular tourist attraction. The 500-year-old tree was illegally cut down by on , as an apparent political protest against Canadian-government-sanctioned logging companies. [ [http://209.85.135.104/search?q=cache:eG5K0dqsy8oJ:www.newyorker.com/fact/content/%3F021104fa_fact+golden+spruce&hl=de&ct=clnk&cd=4&gl=de] ]

The islands are home to a wide variety of other large native trees, including the beautiful , (), Shore Pine, , , and .

Another rare natural occurrence that was popular amongst tourists to Haida Gwaii was the "White Raven". This was an that was often mistaken for an or owing to its unusual colouring. The "White Raven" lived around Port Clements and would commonly be seen taking food handouts from locals and visitors alike. It died after making contact with an electrical transformer, temporarily knocking out power to the town and surrounding area.

The Queen Charlotte Islands are located along the , which is an active that produces significant earthquakes every 3–30 years. The fault is the underwater meeting of the Pacific and North American Plates along the Queen Charlotte west coast. The largest recorded earthquake occurred in 1949, with a magnitude of 8.1 on the . The earthquake tipped cows, toppled chimneys, and an oil tank at Cumshewa Inlet collapsed. [Citation
last =
first =
author-link =
last2 =
first2 =
author2-link =
title = On This Day August 22, 1949
newspaper = National Post
pages = B14
year = 2008
date = Friday, August 22, 2008
url = ] The most recent earthquakes were in January 2008, measuring up to 6.5.

The artwork known as "Haida Gwaii", by , is featured on the reverse of the Canadian $20 bill. [http://www.bank-banque-canada.ca/en/banknotes/graphs/photos/general/2001-04/cjs_20b.gif] The piece depicts the in a canoe, accompanied by the mythic messengers. Haida art is also frequently seen on large monumental sized cedar and dugout canoes, hand crafted gold and silver jewelry, and even as cartoons in the form of .

The has been classified as part of the family of languages on the basis of a few similarities with Athabaskan-Eyak-Tlingit. Many linguists consider the evidence inconclusive and continue to regard Haida as an . All 50 remaining speakers of Haida are over 70. and the Gwaii Trust recently completed a project to bring broadband internet to the island via a 150 kilometre microwave relay. This enables interactive research to be carried out on the more than 80 CDs of language, story and spoken history of the people.

The main transportation links between the Islands and mainland are the terminal at , the , and the . The westernmost leg of Highway 16 connects and Skidegate on Graham Island, and Skidegate with Prince Rupert on the mainland via regular BC Ferries service by the MV "Queen of Prince Rupert" and MV "Northern Adventure". There is also regular BC Ferries service between Skidegate and Alliford Bay on Moresby Island. Floatplane services connect to facilities such as the and .