Thornhill (2006 population 106,394) is a community in the Greater Toronto Area of Southern Ontario, Canada, located on the northern border of the city of Toronto. Once a municipal village, Thornhill is now a community and postal designation geographically split into two municipalities along Yonge Street, the city of Vaughan to the west and the town of Markham to the east. According to the 2001 Census, the population of Thornhill-Vaughan was 56,361,[1] and the population of Thornhill-Markham was 47,333.[2]

It is immediately south of Richmond Hill.

The corner of Old Yonge and Centre street. 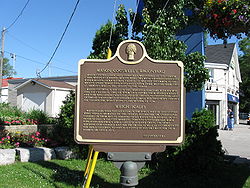 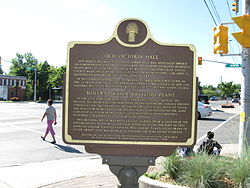 Thornhill was founded in 1794.[3] Its first settlers on Yonge Street in Thornhill were Asa Johnson (who settled on the Vaughan side) and Nicholas Miller (who settled on the Markham side). Of particular importance was the arrival of Benjamin Thorne in 1820, who was operating a gristmill, a sawmill, and a tannery in the community. The settlement came to be known as Thorne's Mills, and later, Thorne's Hill, from which its current name is derived. (Thorne committed suicide in 1848, after a serious wheat market crash.)

Between 1830 and 1848, Thornhill experienced a period of continued growth and prosperity. The business district of Thornhill developed on its portion of Yonge Street, between Centre Street and John Street. Stagecoaches travelled between Holland Landing (Lake Simcoe) and York (Toronto) as Yonge Street's road conditions improved with new stonework. During this prosperous period, several churches, many of which are still standing today, were constructed.

Thornhill's location along Yonge Street, a major transportation route, proved to be beneficial to the community's growth throughout much of the twentieth century. The implementation of an electric street railway along Yonge Street in 1898 towards Kleinburg, Georgina, King and Toronto meant that, for the first time, it was possible for people to reside in Thornhill and work in Toronto. By the 1920s, the prevalence of the automobile further facilitated travel along Yonge Street.

In 1931, Thornhill became a "Police Village"; before that time, Thornhill had no independent status and was split between the townships of Vaughan and Markham along Yonge Street, since the creation of municipal government in 1850. Before 1931, each township administered its own half of the village. The creation of the Police Village gave Thornhill its own political boundaries. The village was headed by a reeve.

In 1971, York Region was created, part of a wave of municipal re-organization which converted many townships into towns and eliminated many of the municipal forms of organization which had existed within those townships. The establishment of a regional administration effectively eliminated the Police Village of Thornhill. Thornhill's administration reverted to the newly formed towns of Markham and Vaughan at this time.

However, many political and social institutions remained organized around the former municipal entities eliminated in 1971. Like neighbouring communities such as Woodbridge, Maple, and Unionville – as is typical for most urbanized former Greater Toronto Area (GTA) villages outside of the City of Toronto – Thornhill remained the postal designation for addresses within the former village's boundaries, and community organizations such as local newspapers, sports teams, and schools continued to operate under the Thornhill name and designation. As an example, until the mid-1990s residents of Thornhill seeking to play high-level hockey were required to play for a Thornhill team.

While the old village of Thornhill revolved around Yonge Street between Centre and John Streets, the community is typically thought to be located between Dufferin Street to the west, Highway 7 to the north, Steeles Avenue to the south, and Highway 404 to the east. 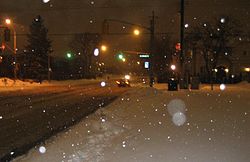 A minor February 2008 snowstorm in Thornhill.

Thornhill's growth since the 1960s and 1970s has been largely connected to its location bordering what is now the City of Toronto. Large housing developments, particularly beginning in the 1980s with such projects as the Tannenbaum family's Spring Farm area near Bathurst and Clark. Beth Avraham Yoseph of Toronto, a large synagogue named after developer and benefactor Joseph Tannenbaum, is an example of an innovative twist on the "anchor tenant" approach adopted by some residential developers.

Growth has continued apace. For instance, an "uptown" village denoted as Thornhill Town Centre, is being developed at the corner of Bathurst and Centre Street, forming a continuous line of development north from the Promenade Shopping Centre also near Bathurst and Clark, whose massive parking lot is dotted by an increasing number of condominium buildings and stand-alone retail plazas.

The territory thought to constitute Thornhill has recently begun to expand northward in Thornhill-Vaughan, particularly west of Bathurst, due to the marketing initiatives of residential developers. A new area called "Thornhill Woods" was developed between Highway 7, Rutherford, Bathurst, and Dufferin. Another planned development, "Upper Thornhill Estates", extends well to the north of Major Mackenzie. In 2008 the City of Vaughan held a groundbreaking ceremony for the North Thornhill Community Centre, a new community centre to serve this population which is slated to open in 2010.

However, it should be noted that the area being labelled as "Upper" or "North" Thornhill is more traditionally part of Maple, another former village converted to a community when the Township of Vaughan was converted to a town. Other developments taking place in these new areas include Eagle Hills/Mackenzie Chase/Thornberry Woods at Dufferin and Major Mackenzie. Coronation and Roxborough is being developed at Upper Bathurst between Rutherford Road and Major Mackenzie. The Vaughan planning area that includes Block 18 (East Maple), Block 11 (Thornhill/Maple), Block 12 (Upper Thornhill/Maple) and Block 10 (Thornhill Woods) is expected to grow substantially over the next few years. This area is known as the "Carrville District".

Thornhill has a very ethnically diverse population. It is home to significant visible minorities communities, but is particularly known for its large Jewish community: 36.6% of the population of Thornhill is Jewish, the highest in Canada.[4] It is home to numerous Jewish synagogues and schools, particularly Ashkenazi and Sephardic Orthodox Jewish synagogues such as the Thornhill Community Shul, Westmount Shul and Learning Centre, the Beth Avraham Yoseph of Toronto, Sephardic Kehilla Centre, and Chabad centres such as the Jewish Russian Community Centre, as well as Conservative synagogues such as Beit Rayim as well as Reform Jewish institutions such as Temple Har Zion, Temple Kol Ami, and the Leo Baeck Day School, a major Reform Jewish primary school.

Thornhill is a federal and provincial riding. The Member of Parliament for Thornhill is Peter Kent (Conservative), and the Member of Provincial Parliament is Peter Shurman (Progressive Conservative). Municipally, Thornhill is split into Wards 4 and 5 in the City of Vaughan and Wards 1 and 2 in the Town of Markham. It is represented by Sandra Yeung Racco (Vaughan Ward 4), Alan Shefman (Vaughan Ward 5), Valerie Burke (Markham Ward 1), and Howard Shore (Markham Ward 2). The riding had traditionally been held by Liberal, both provincial and federal MP and MPP's respectively.

There are no general hospitals in the Thornhill area; the nearest are York Central Hospital in Richmond Hill and North York General Hospital in Toronto. A private hospital, Shouldice Hernia Centre, is in Thornhill and is one of the world's premiere facilities for the treatment of hernias . 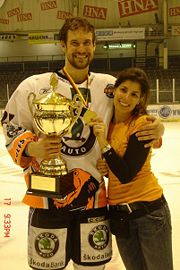 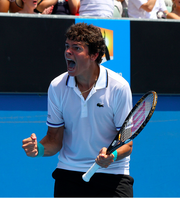