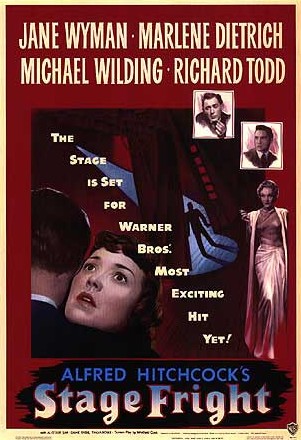 Produced and directed by , the story was adapted for the screen by , , and , with additional dialogue by , based on the "" by .

Though Hitchcock had lived and worked in Hollywood since , this mystery/thriller, which is mixed with humor, was filmed on location in . The only members of the cast who are not British are the two top billed stars, Wyman and Dietrich.

Featured is an original song, "The Laziest Gal In Town" performed by Dietrich in a sultry fashion. Costumes were designed by .

"Stage Fright" garnered some adverse publicity upon its initial release due to the "lying flashback" which is seen at the beginning of the film. However, some film critics, including those of "", see the flashback as simply being an illustration of one person's version of the events: the events as recounted by the character whose voice-over we hear, which was presumably Hitchcock's intention.

Drama student Eve Gill (Wyman), receives a call from a friend, Jonathan Cooper (Todd), and is asked to come over and pick him up. In her car, the frantic Jonathan, who is in the cast of a West End musical starring a flamboyant stage actress/singer, Charlotte Inwood (Dietrich), explains that he and Charlotte are secret lovers and that he is now wanted by the police who suspect him of ing her husband. He recounts in a flashback that Charlotte was actually the murderer; that she was wearing a blood stained dress he helped her dispose of; that he was seen leaving the scene of the crime and is sure to be charged and convicted.

Eve has long had a crush on Jonathan, but accepts that he is not interested in her romantically. She offers to hide him, with the help of her (at first) reluctant father, Commodore Gill (Sim), and decides to investigate for herself. She bribes Charlotte's shrewd theatre maid and dresser, Nellie Goode (Walsh), to pretend she is ill. Eve then utilizes her acting skills to affect the false identity and accent of a maid, claiming to be Nellie's cousin, Doris, and takes the temporary job of replacing "her cousin" in order to prove Jonathan's innocence.

When she meets the policeman in charge of the case, Detective-Inspector Wilfred Smith (Wilding), who does not know that she is working as Charlotte's maid, Doris, they gradually begin falling in love. While working for Charlotte and trying to find evidence showing she committed the crime and is framing Jonathan, she attempts to get Smith to reveal information about the progress of the case at . As Smith is also keeping an eye on Charlotte, there is a great chance that something will go wrong.

Eve is able to gain the confidence of Charlotte, who goes about business as usual. But the mystery surrounding the murder becomes more confusing and complex as she searches for some evidence. Her relationship with Smith becomes a little strained. She wants to tell him that she is doubling as Doris, but the timing never seems right.

There is a scene at a garden party where Charlotte is singing on stage in a large tent that ends with Commodore Gill getting a little boy to take a doll wearing a dress stained with blood, his own, up to her and she faints. Eve is there as herself and is hesitant to go and assist Charlotte, as Smith will learn of her deception. The movie ends at the closed theatre. The final scenes have Eve come out of character and confront the selfish and ruthless Charlotte in her dressing room as loudspeakers reveal all that is said to Detective-Inspector Smith and his men; Jonathan having "stage fright" when he comes in and sees the police then flees; Eve in breathless peril when she is with the real murderer alone.

Alfred Hitchcock's cameo is a signature occurrence in most of his films. In "Stage Fright" he can be seen (39 minutes into the film) as a man on the street turning to look at Eve in her maid disguise. In the , edition of the "", Hitchcock stated::"In "Stage Fright", I have been told that my performance is quite juicy. I have been told this with a certain air of tolerance, implying that I have now achieved the maximum limits of directorial ham in the movie sandwich. It isn't true. There may have been a "" in my film appearance, but not a ham".

*Eve Gil: I'm afraid the murderer might come here, Madam. Might get into the dressing room. Might even murder me, Madam. I'm surprised you're not a bit afraid yourself.
*Charlotte Inwood: The theatre is the last place he would be seen. Now stop acting like a silly schoolgirl, the only murderer here is the orchestra leader!

*Charlotte Inwood (disappointed with the widow's dress she is trying on) "Can't you make it plunge a little in the front?"