Shaun the Sheep is a British stop-motion animated children's television series produced by Aardman Animations, and commissioned by the BBC and the WDR. It first aired in the UK on CBBC in March 2007. The show consists of 80 episodes in 2 seasons, and is currently in hiatus.

A premise of the series is that Shaun the sheep exhibits human intelligence, creativity, and behaviour in a farm setting, which usually provides a situational comedy conflict which Shaun must resolve before the end of each episode. Recurring themes include the characters evading the sheepdog Bitzer (though he is sometimes with the sheep in their escapades) and avoiding discovery by the Farmer.

Episodes are very much a combination of slapstick and classic silent comedy in Aardman’s recognizable animation style. There is no spoken dialogue, even by human characters. In this way it is reminiscent of silent comedy films and even Pingu and the animated version of Mr. Bean. However, simple grunts, bleats, and sighs are all used to add subtle expression to each character's moods and feelings.

Based on the theme song, a longer, compact disc version was released under the title "Life's a Treat", performed by Vic Reeves,

Shaun the Sheep made his first "official" appearance in Wallace & Gromit's third short feature, the Academy Award winning "A Close Shave" as the youngest member of a flock of sheep Wallace and Gromit work to save from an evil mechanical dog that wants to turn them all into dog food for profit. Shaun does show a hint of intelligence, though he proves to be a big factor in saving the day. Shaun and the entire herd are also seen living with the inventive duo (much to Wallace's annoyance since they eat everything in sight, including furniture and clothes as well as his beloved cheese), though none of this seems to be part of this series' canon, or it can be surmised Wallace simply sold off the flock to The Farmer where Shaun and his friends now reside.

Shaun also made a brief cameo appearance with the duo in one of the episodes (entitled "Shopper 13") of Wallace & Gromit's "Cracking Contraptions" web series of shorts. 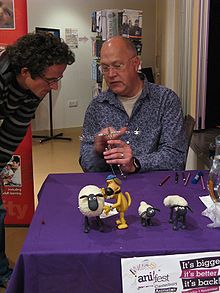 Richard Goleszowski at Canterbury's Anifest 2008 with models of one of the sheep in the flock, Bitzer, Timmy, and Shaun.

Reviews of the series were consistently positive. Harry Venning of "The Stage" found "characterisation charming and the animation superb. All this before even a mention of how funny and splendidly slapstick the script is."[3] The Guardian noted that the series "hits the four-to-seven-year-old age group smack in the eye."[4] Charles Arthur wrote "classic Aardman style that leaves me laughing out loud."[5] On forums, the show has received rave reviews, with Shaun becoming a favourite among adults as well as children.[6]

As with the series' parent show Wallace and Gromit, there are many allusions to scenes from movies such as Star Wars, The Lion King, E.T.: The Extra-Terrestrial, The Matrix, and Pulp Fiction. These include:

On March 9, 2011, Shaun the Sheep made its theatre début in live Shaun's Big Show.[8] This 1 hour and 40 minutes long musical/dance show features all favourite characters, including Bitzer, Shirley and Timmy.

On 16 June 2008, D3 Publisher of America, which published a game based on Aardman's 2006 film Flushed Away, announced that it would also release a video game based on the television series. The Shaun the Sheep game was developed by Art Co., Ltd exclusively for Nintendo DS, and was released in autumn 2008.[9] The Shaun the Sheep website also ran a contest which offered five packages containing a Nintendo DS and a copy of the game as a prize.

A second game named Shaun the Sheep: Off His Head was released in 2009 exclusively in Europe.

The Shaun the Sheep web site is also home to several Flash-based games, including Home Sheep Home,[10] which is also available at the iOS App Store for iPhone, iPod touch, and iPad.[11]

Aardman Animations produced a spin-off show aimed at pre-schoolers based on Timmy, called Timmy Time.[12] In addition, an anime version was due to commence broadcasting in Japan October 3, 2010.[13]