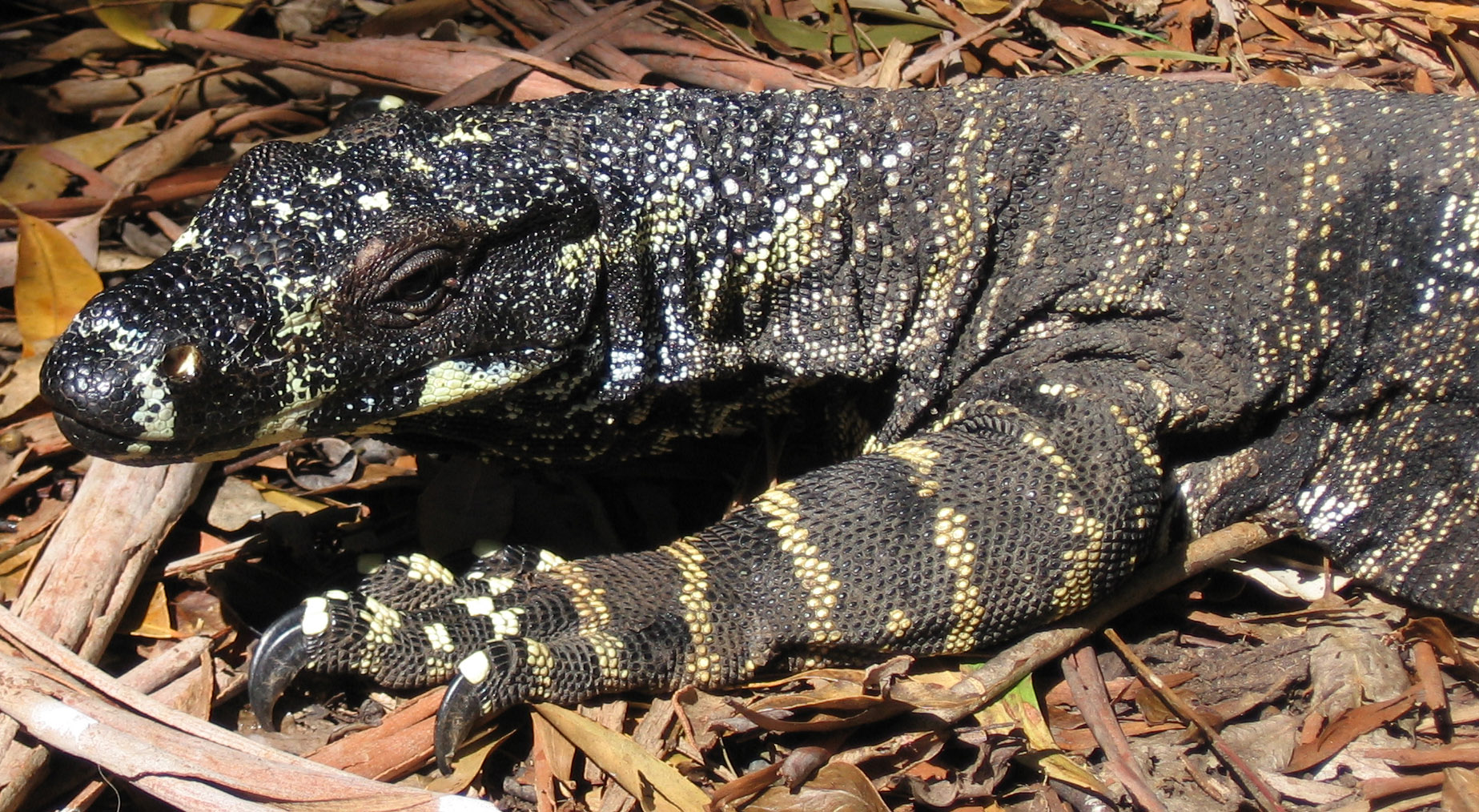 The Lace Monitor, or Lace Goanna, "Varanus varius", is a member of the family, Australian members of which are commonly known as s.

These common terrestrial and often monitors are found in eastern Australia and range from on to south-eastern . They frequent both open and closed forests and forage over long distances (up to 3 km a day).

They are mainly active from September to May, but are inactive in cooler weather and shelter in a or under a fallen tree or large rock.

The females lay from 4 to 14 eggs in spring or summer in termite nests. They frequently attack the large nests of s to steal their eggs, and often show injuries on their tails inflicted by male Scrub Turkeys pecking at them to drive them away.

Their patterning consists of white spots, blotches or bands on their body. Their distribution is chiefly coastal. Their diet typically consists of insects, reptiles, small mammals, birds and birds' eggs.

Like all Australian goannas, they were a favourite traditional food of peoples and their fat was particularly valued as a medicine and for use in Fact|date=June 2007.

In late 2005, researchers discovered that s ("Varanus giganteus") and other lizards, may be somewhat . Previously, it had been thought that bites inflicted by these lizards were simply prone to infection because of bacteria in the lizards' mouths, but these researchers have shown that the immediate effects are caused by mild envenomation. Bites on human digits by a ("Varanus varius"), a ("V. komodoensis") and a ("V. scalaris") have been observed and all produced similar results in humans: rapid swelling within minutes, localised disruption of blood clotting, shooting pain up to the elbow, with some symptoms lasting for several hours. [Fry, Brian G., et al. (2006). "Early evolution of the venom system in lizards and snakes." "Nature". Letters. Vol. 439/2 February 2006, pp. 584-588. Pdf file available for download at: [http://scholar.google.com/scholar?hl=en&q=%22Early%20evolution%20of%20the%20venom%20system%20in%20lizards%20and%20snakes%22%20Letters%20Nature%2010.1038&oe=UTF-8&um=1&ie=UTF-8&sa=N&tab=ws] ]