In electronics, a common-base (also known as grounded-base) amplifier is one of three basic single-stage bipolar junction transistor (BJT) amplifier topologies, typically used as a current buffer or voltage amplifier. In this circuit the emitter terminal of the transistor serves as the input, the collector the output, and the base is common to both (for example, it may be tied to ground reference or a power supply rail), hence its name. The analogous field-effect transistor circuit is the common-gate amplifier.

This arrangement is not very common in low-frequency circuits, where it is usually employed for amplifiers that require an unusually low input impedance, for example to act as a preamplifier for moving-coil microphones. However, it is popular in high-frequency amplifiers, for example for VHF and UHF, because its input capacitance does not suffer from the Miller effect, which degrades the bandwidth of the common-emitter configuration, and because of the relatively high isolation between the input and output. This high isolation means that there is little feedback from the output back to the input, leading to high stability.

This configuration is also useful as a current buffer since it has a current gain of approximately unity (see formulas below). Often a common base is used in this manner, preceded by a common-emitter stage. The combination of these two form the cascode configuration, which possesses several of the benefits of each configuration, such as high input impedance and isolation.

At low frequencies and under small-signal conditions, the circuit in Figure 1 can be represented by that in Figure 2, where the hybrid-pi model for the BJT has been employed. The input signal is represented by a Thévenin voltage source, vs, with a series resistance Rs and the load is a resistor RL. This circuit can be used to derive the following characteristics of the common-base amplifier.

In general the overall voltage/current gain may be substantially less than the open/short circuit gains listed above (depending on the source and load resistances) due to the loading effect.

For voltage amplification, the range of allowed output voltage swing in this amplifier is tied to its voltage gain when a resistor load RC is employed, as in Figure 1. That is, large voltage gain requires large RC, and that in turn implies a large DC voltage drop across RC. For a given supply voltage, the larger this drop, the smaller the transistor VCB and the less output swing is allowed before saturation of the transistor occurs, with resultant distortion of the output signal. To avoid this situation, an active load can be used, for example, a current mirror. If this choice is made, the value of RC in the table above is replaced by the small-signal output resistance of the active load, which is generally at least as large as the rO of the active transistor in Figure 1. On the other hand, the DC voltage drop across the active load is a fixed low value (the compliance voltage of the active load), much less than the DC voltage drop incurred for comparable gain using a resistor RC. That is, an active load imposes less restriction on the output voltage swing. Notice that active load or not, large AC gain still is coupled to large AC output resistance, which leads to poor voltage division at the output except for large loads RL >> Rout.

Several example applications are described in detail below. A brief overview follows.

where VT is the thermal voltage and IE is the DC emitter current.

For example, for VT = 26 mV and IE = 10 mA, rather typical values, Rin = 2.6 Ω. If IE is reduced to increase Rin, there are other consequences like lower transconductance, higher output resistance and lower β that also must be considered. A practical solution to this low-input-impedance problem is to place a common-emitter stage at the input to form a cascode amplifier.

where gm = IC / VT is the transconductance. Notice that for low source impedance, Rout = rO || RC.

For the case when the common-base circuit is used as a voltage amplifier, the circuit is shown in Figure 2.

The output resistance is large, at least RC || rO, the value which arises with low source impedance (RS << rE). A large output resistance is undesirable in a voltage amplifier, as it leads to poor voltage division at the output. Nonetheless, the voltage gain is appreciable even for small loads: according to the table, with RS = rE the gain is Av = gm RL / 2. For larger source impedances, the gain is determined by the resistor ratio RL / RS, and not by the transistor properties, which can be an advantage where insensitivity to temperature or transistor variations is important.

An alternative to the use of the hybrid-pi model for these calculations is a general technique based upon two-port networks. For example, in an application like this one where voltage is the output, a g-equivalent two-port could be selected for simplicity, as it uses a voltage amplifier in the output port. 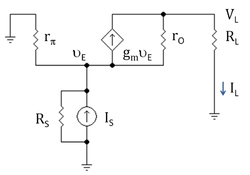 Figure 3: Common-base circuit with Norton driver; RC is omitted because an active load is assumed with infinite small-signal output resistance

Figure 3 shows the common-base amplifier used as a current follower. The circuit signal is provided by an AC Norton source (current IS, Norton resistance RS) at the input, and the circuit has a resistor load RL at the output.

An alternative analysis technique is based upon two-port networks. For example, in an application like this one where current is the output, an h-equivalent two-port is selected because it uses a current amplifier in the output port.