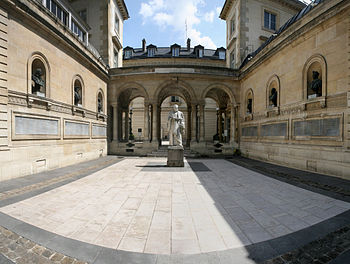 Standing statue of Guillaume Budé in the courtyard of the Collège de France.

Coordinates: 48°50′57″N 002°20′44″E﻿ / ﻿48.84917°N 2.34556°E﻿ / 48.84917; 2.34556 The Collège de France (French pronunciation: [kɔlɛʒ də fʁɑ̃s]) is a higher education and research establishment (Grand établissement) located in Paris, France, in the 5th arrondissement, or Latin Quarter, across the street from the historical campus of La Sorbonne at the intersection of Rue Saint-Jacques and Rue des Écoles. It mainly supports research; it also provides teaching, but to professors and researchers.

It was established in 1530 by King Francis I of France, as an imitation of the Collegium Trilingue in Louvain, at the urging of Guillaume Budé. Of humanist inspiration, this school was established as an alternative to the Sorbonne to promote such disciplines as Hebrew language, Ancient Greek (the first teacher being the celebrated scholar Janus Lascaris) and Mathematics.[1] Initially called Collège Royal, and later Collège des Trois Langues (Latin: Collegium Trilingue), Collège National, Collège Impérial, it was named Collège de France in 1870.

What makes it unique is that each professor is required to give lectures where attendance is free and open to anyone, although some high-level courses are not open to the general public. The school's goal is to "teach science in the making" and therefore the professors are chosen from among the foremost researchers of the day, with no requirement other than that of being at the top of their fields. They are chosen from a variety of disciplines, in both science and the humanities. Even though the motto of the Collège is "Docet Omnia," Latin for "It teaches everything," its goal can be best summed up by Maurice Merleau-Ponty's phrase: "Not preconceived notions, but the idea of free thought" which is burned in golden letters above the main hall of the Collège building.

The Collège does not grant degrees, but has research laboratories, as well as one of the best research libraries of Europe, with sections focusing on history with rare books, humanities, social sciences, but also chemistry or physics.

The faculty of the Collège de France currently comprises fifty-two Professors, elected by the Professors themselves from amongst eminent Francophone scholars in a wide range of subjects. Chairs cover a range of subjects including mathematics, physics, chemistry, biology, history, archaeology, linguistics, oriental studies, philosophy, the social sciences and other fields. In addition, two chairs are reserved for foreign scholars who are invited to give lectures.