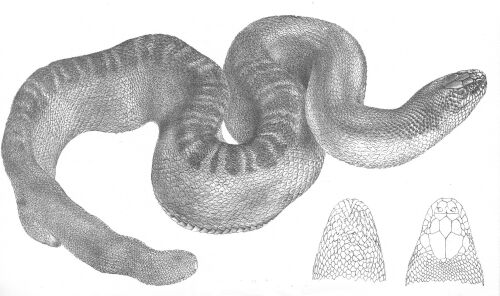 Head moderate; body stout. Rostral as deep as broad; nasals shorter than the frontal, more than twice as long as the suture between the prefrontals; frontal longer than broad, as long as or slightly longer than its distance from the rostral; one pre- and two postoculars, 9 or 10 upper labials, fourth, fifth, and sixth catering the eye, if not divided to form a series of suboculars ; two or three superposed anterior temporals; no chin-shields. 39 to 47 scales lound the neck, 48 to 53 round the middle of the body; scales much imbricate, pointed, keeled, the keel frequently broken up into two tubercles. Ventrals usually distinct only quite anteriorly, further back in pairs and not larger than the adjoining scales; 240-267. Yellowiah or pale brownish, with broad black dorsal cross bands, or with complete black annuli. [Boulenger, G. A. 1890. Fauna of British India. Reptilia and Batrachia.]

China Sea and Strait of Taiwan. Coastal areas from W India and Sri Lanka Lanka wast through Gulf of Siam to China Sea, W Malaysia,Indonesia east to New Guinea and the northern and eastern coast of AustraliaSE Asian Sea (from Pakistan to Australia), Philippine Islands.