Tram route 86 is a public transport service in Melbourne, Victoria, Australia. It runs from Bundoora in the northern suburbs to Waterfront City Docklands in the city. It is one of Melbourne's busiest tram routes carrying 44,200 passengers a day.[1] Route 86 will be one of two suburban tram routes to provide a transport link to The Southern Star observation wheel.

Unlike most tram routes in Melbourne, it falls within Metcard/myki ticketing Zone 1 and Zone 1/2.

An extension from Docklands along Footscray Road to Footscray is proposed.[2]

In 2010 Melbourne-based musical comedian The Bedroom Philosopher released an album Songs from the 86 Tram inspired by the tram route as well as an award-winning comedy show of the same name.[3]

The Fitzroy, Northcote and Preston Tramways Trust had started constructing a system but it wasn't until after its takeover by the Melbourne and Metropolitan Tramways Board that services first ran, on 1 April 1920, part of this system included a line from Dundas Street to Tyler Street.[6] This network was orphaned from the rest of the electric network until 24 March 1925 when a line along Holden Street, Pilkington Street and Barkly Street was built by the Melbourne and Metropolitan Tramways Board to allow access to the CBD via Lygon Street.[7]

On 18 May 1983 the suburban terminus was extended from Tyler Street to Boldrewood Parade, then to La Trobe University on 10 January 1985, to Settlement Road on 26 April 1987[10] and to the current terminus at McKimmies Road on 12 October 1995.[11] This final extension cost $12.6 million and was funded as part of the Commonwealth Government's Building Better Cities program.[12]

In July 2008 route 30 and route 86 swapped terminus's, with route 30 terminating in Harbour Esplanade at Central Pier, and route 86 being extended to Waterfront City.[14]

In August 2008 route 86 was the first route to see tram based testing of the myki ticketing system, using special services not open to normal fare-paying passengers.[15]

Prior the all trams stops in Zone 2 being rezoned as Zone 1/2 overlap - as a result of the introduction of myki - stops 61 to 71 were in Zone 2.

A project to: improve access through platform stops, perform track and overhead renewal and improve speed and reliability on a 6.8km section of route 86, along High Street and Plenty Road, between Westgarth Street, Westgarth and Albert Street, Reservoir was started in 2011.[16][17] 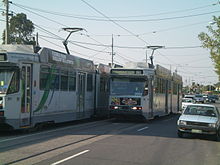 Two route 86 trams pass each other along Plenty Road, Preston

Route 86 runs from Bundoora, travelling south on Plenty Road traversing the suburbs of, Reservoir and Preston, passing RMIT Bundoora Campus and La Trobe University. Plenty Road ends in Preston at Dundas Street and High Street, route 86 turns slightly into High Street and continues south through Thornbury and Northcote. It then crosses the Merri Creek, continuing along Queens Parade Clifton Hill, heading south west, turning south into Smith Street passing between Fitzroy and Collingwood. Just before the end of Smith Street it turns west into Gurtrude Street, Fitzroy, and south into Nicholson Street, Carlton, past the Royal Exhibition Building in the Carlton Gardens, a World Heritage Site.

It enters the CBD on Spring Street turning west into Bourke Street at Parliament House, travels through the Bourke Street Mall and turns north into Spencer Street, passing Southern Cross Station, it turns west at La Trobe Street, passing over the Spencer Street rail yards into Docklands, it travels north briefly on Harbour Esplanade before turning west into Docklands Drive, where it terminates in Waterfront City Docklands.