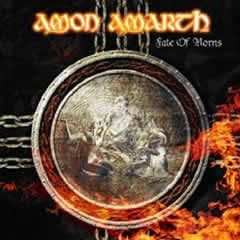 "Fate of Norns" is the fifth full-length by the band , released on , by . This album continued their slower, heavier sound which started on the previous album "Versus the World". Before "Fate of Norns" was officially released by Metal Blade, promo copies were distributed with extras including pictures, biographies, sheets and logos. The album was released in conventional LP format as well as a limited edition. The latter includes a live bonus , "Amon Amarth Live at Grand Rokk", which features live recordings and three-camera footage of a live performance in , on , . "The Pursuit of Vikings" was also made into a .

When asked to comment on the album, lead vocalist , remarked: cquotetxt|The sound is more mature than on previous albums. I think the foundation for this sound started when we changed studios from Abyss to Berno when we got to working with Berno Paulsson. We improved the sound a lot for this album. We were able to make all the instruments work better together and still make them prominent one by one in the production as well. We were also able to keep the heaviness and brutality we need to be Amon Amarth.|Johan Hegg|color=gray|size=360%

* Mixed and mastered at Berno Studio by Berno Paulsson.
* Horn on "Arson" by Udo Schlangschnabel.