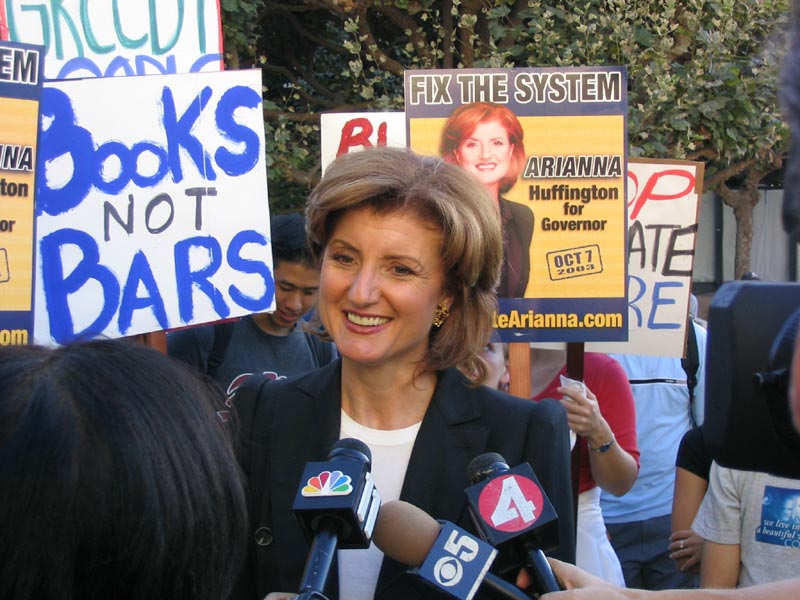 Arianna Huffington (born Arianna Stassinopoulos, on , ) is an , media gadfly, and nationally syndicated in the . She is the founder of "", a liberal [cite news|url=http://www.guardian.co.uk/technology/2008/aug/25/huffington.post|title=Huffington Post: From millionaire's blog to leading liberal newspaper|accessdate=2008-09-18|date=August 25, 2008|work=Guardian News|author=Schofield, Jack] online news and commentary and aggregated .

Huffington was born in Athens, , the daughter of Konstantinos (a and management consultant) and Elli (née Georgiadi) Stassinopoulos, and is the sister of Agapi (an author, speaker and performer). To this day, she speaks with a marked Greek accent. She moved to at the age of 16 and attended at Cambridge University where she was President of the in 1971 and graduated with a BA (later to become an MA in accordance with Cambridge's practice) in in 1972. Fact|date=September 2008

After graduation, she moved to and lived with the journalist and broadcaster , whom she had met while the two were s on the TV show "Face the Music". She left Levin in 1980, and moved to the . During these years and around the time of her involvement with John-Roger's religious group, she was involved with Democratic politician and then-governor (currently Attorney General) of California, . It was during this time that Huffington (then Stassinopoulos) was first known as a liberal/left-wing/Democrat, the position she returned to once again in the post-90s following the right-wing years of the 1980s to late 1990s. Fact|date=September 2008

She met oil millionaire , a family friend of the Bushes at a 1985 party hosted by in . The couple were married in 1986 at a wedding paid for by , who had declared that she needed to find Arianna a husband. They moved to , when he was appointed to serve as Deputy Assistant Secretary of Defense for Negotiations Policy. They later established residency in , in order for him to run in 1992 as a Republican for a seat in the , which he won by a significant margin. He was a political conservative on most issues. Arianna campaigned for her husband, courting religious conservatives, arguing for smaller government and a reduction in welfare. In 1994 he narrowly lost the race for the U.S. Senate seat from to incumbent . Fact|date=September 2008

In 1981, she wrote a biography of ("Maria Callas-The woman Behind the Legend").In the late 1980s Huffington wrote several articles for 'National Review'. In 1996 Huffington and liberal participated as Strange Bedfellows [ [http://www.huffingtonpost.com/huff-tv/strange-bedfellows_b_41316.html Huff TV: Strange Bedfellows ] ] in 's coverage of the 1996 U.S. presidential election. For her work, she and the writing team of "" were nominated for an , for Outstanding Writing for a Variety or Music Program. She has also made a few forays into acting with roles on shows such as "", "", "" and the film "". [ [http://www.imdb.com/name/nm0400251/ Arianna Huffington's IMDb page.] ]

Huffington's politics began changing in the late 1990s, moving noticeably to the left. During the former Yugoslavia Balkans wars of the 1990s Huffington opposed United States intervention in the crisis.

Huffington heads , a public interest group automakers to start producing cars running on s. The project's 2003 TV ads, which equated driving s to funding , proved to be particularly controversial, with some stations refusing to run them.

In a 2004 appearance on "" she announced her endorsement of by saying that "When your house is burning down, you don't worry about the remodeling." In recent years, she has been closely associated with the Democratic Party. Huffington was a panel speaker during the 2005 California Democratic Party State Convention, held in Los Angeles. She also spoke at the 2004 Convention in Boston, which was held in conjunction with the .

Huffington was an independent candidate to replace California governor in the 2003 recall election. She described her candidacy against front-runner as "the hybrid versus the ," making reference to her ownership of a hybrid vehicle, the , and Schwarzenegger's Hummer.

Despite briefly retaining former U.S. Senator as a campaign advisor and advertising executive as her media director, she dropped out of the race on , . "I'm pulling out, and I'm going to concentrate every ounce of time and energy over the next week working to defeat the recall because I realize now that's the only way to defeat Arnold Schwarzenegger," she said. Others attributed her exit to her inability to garner support for her candidacy, noting that polls showed that only about two percent of likely California voters planned to vote for her at the time of her withdrawal. [ [http://www.cnn.com/2003/ALLPOLITICS/09/30/calif.recall/ CNN.com - Huffington withdraws from recall race - Sep. 30, 2003 ] ] Though she failed to stop the recall, Huffington's name still appeared on the and she placed 5th in a field of 135 candidates, capturing 0.6 percent of the votes. Her former husband endorsed Schwarzenegger.

After her attempts to woo the religious right, in 1994, Cartoonist created a spoof of Arianna Huffington's spiritual experiences with a Los Angeles-based spiritual organization founded by John-Roger, the Movement of Spiritual Inner Awareness. The purpose of the (MSIA) is to teach Soul Transcendence, which is becoming aware of yourself as a Soul and as one with God, not as a theory but as a living reality. Huffington has said that "I've been involved with John-Roger and the church for many years now" Fact|date=July 2008 Tax returns show Huffington as an MSIA donor.Fact|date=July 2008

Huffington has also courted conservative Christian RepublicansFact|date=October 2008, commonly referred to as the Religious Right, by advocating a removal of the welfare state, to be replaced by voluntary charitable donation, stating that "big government cheats people out of the spiritual rewards of giving to the needy". "It's time to bring God into the public square," Arianna Huffington declared, while giving a talk on The Fourth Instinct before a Republican women's conference.Fact|date=October 2008

More recently, Huffington has criticized the Christians of the Republican party as those "who don't believe in evolution but believe in torture". Her weblog, The Huffington Post, has three of the world's most prominent atheist writers as contributors: Sam Harris (); (); ().

In the 1970s, on the strength of her prominence in the Cambridge Union, Arianna Stassinopoulos was a frequent panelist on the weekly Radio 4 programme, "".

Huffington is co-host of the nationally syndicated program "Left, Right & Center". She was originally introduced by the moderator as occupying the chair “from the right,” but is now described as “coming from the of political time and space,” or from the “independent-progressive .” In May 2007, she and began co-hosting a new radio show on , "".

Huffington also has an Internet presence with her website "", which features blogs and commentary from her and from a number of prominent journalists, public officials, and celebrities. The site also highlights news stories from various sources.

Huffington was accused of for copying material for her book "Maria Callas"; the claims were settled out of court. [Nussbaum, Emily (October 9, 2006) [http://nymag.com/news/features/21989/index3.html "The Human Blog."] "New York Magazine".]