The Armed Forces of Belarus (Belarusian: Узброеныя сілы Рэспублікі Беларусь - УС РБ, Uzbrojenyja sily Respubliki Bielaruś, Russian: Boopyжённыe cилы Pecпyблики Бeлapycь, Vooruzhennye sily Respubliki Belarus) consist of the Army and the Air and Air Defense Forces, all under the command of the Ministry of Defense of the Republic of Belarus. Lieutenant general Yurij Viktorovich Zhadobin is the Minister of Defense since December 4, 2009.[6] Being a landlocked country, Belarus has no navy.

The previous Belarusian National Republic of March 1918 to 1919 did not have time to create armed forces in its brief existence, although attempts to create a military have been documented.[7] The Republic of Belarus has conducted effective military reforms within the last decade which have reshaped its armed forces as a relatively effective force for a small state in somewhat difficult economic conditions.[8]

The Ministry of Defence of the Republic of Belarus (Russian: Министерство обороны Республики Беларусь, Belarusian: Мiнiстэрства абароны Рэспублікі Беларусь) is the government organization that is charged with the duties of raising and maintaining the Armed Forces of Belarus. The formation of the ministry began in 1992, a year after the dissolution of the Soviet Union and Belarus becoming an independent state.

On November 3, 1992, Belarus passed the law "On the Armed Forces of the Republic of Belarus" defining the status, structure and guiding principles of the Armed Forces.[9] After the introduction of presidency the law was amended twice: on September 4, 1996 and on November 9, 1999 but on the whole the law retains its initial contents.

Symbol of the Belarusian Ministry of Defense.

Until 1992 the Belorussian Military District of the USSR comprised the 5th Guards Tank Army, the 7th Tank Army, the 28th Army, the 120th Guards Motor Rifle Division, the 51st Guards aviation division, the 72nd Guards United Training Center and logistical units and formations. In addition to these troops Belarus was the area of deployment for units subordinated directly to the USSR Defence Ministry and chiefs of different Soviet Armed Forces services, namely the 103rd Guards Airborne Division, the 38th Guards Airborne Brigade, the 11th corps of the 2nd Separate Air Defence Army, the 26th Air Army and also units and formations of the Strategic Rocket Forces, Long Range Aviation, the Navy and special forces.

In May 1992 the Belorussian Military District was abolished, and on January 1, 1993 all service personnel on Belarussian soil were required to either take an oath of loyalty to Belarus, or leave. This oath however did not alleviate concerns regarding loyalty to Russia in time of crisis, especially since nearly 50% of all military personnel were ethnically Russian at the end of 1992.

Current personnel in the armed forces number 72,940 (IISS 2007), although a reduction to 60,000 is planned. Most soldiers are conscripts serving for a period 12 months (with higher education) or 18 month (without). The branches are as follows[10]: 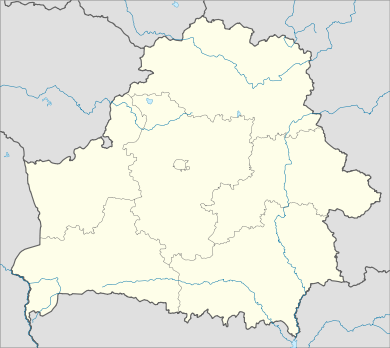 In 1995 the Military Academy of Belarus was set up on the basis of two military educational institutions - the Minsk Air Defense and Rocket School of the Air Defence Forces and the Minsk Higher Military Command School. Its 10 departments train officers of 38 specialties for practically all arms of service. Also in 1995 it was given the status of a government institution of secondary special military education for young men.

Since about 2001, territorial defence forces, which as of 2002 number around 150,000, have been forming, organized into battalions, companies, and platoons spread across Belarus.[12]

The Internal Troops were formed from the former Soviet Internal Troops after the collapse of the Soviet Union. They consist of three independent brigades and seven independent battalions (consecutively numbered). Among the Internal Troops formations is the 3rd Red Banner separate special purpose Brigade (V/Ch 3214, located in Minsk, in the district Uruchcha, "Uruchenskaya Brigade").[15] This brigade performs the task of crowd control, combating terrorism, to assist border guards in case of complications of operative conditions on border. In addition, the brigade has been training for combined arms program in the event of armed conflict. It was formed in the 1990s on the base of the 334th Regiment of the 120th 'Rogachev' Guards Motor Rifle Division.[16]

The military goals of the armed forces of Belarus are to defend the interests of the Belarusian state. This however is at times ambiguous, and is made even more complex with the various agreements that have been recently signed with Russia. Membership in the Commonwealth of Independent States, as well as the 1996 treaty on the Union of Russia and Belarus and the Treaty of the Formation of a Union State in 1999, has confirmed a close partnership with Russia. Much of the air defense system is integrated into the Russian defense network, and in 2006 the two nations signed an agreement on the creation of a unified air defense system.[18]

The military forces of Belarus are exclusively armed with Soviet-era equipment inherited from the Soviet Union. Although large in numbers some Western experts consider some of it outdated. The MBTs are of Russian type T-72, T-62, and T-55, and AFVs are of Russian type MT-LB, BMP-2, BMP-1, and the BMD-1, and Russian type trucks are the GAZ-66 and the KAMAZ-6560. The Air Force is equipped with MiG-29, Su-27 fighters, Su-24, Su-25 bombers, as well as Mi-8, Mi-24, and the Polish built Mi-2 attack helicopters. In December 2005 Belarus bought 10 L-39 jet trainer aircraft from Ukraine, and plans were announced to buy 18 used Su-30K fighters. In 2006 four batteries (divizions in Russian terminology; about 6 systems each) of S-300 anti-aircraft systems were acquired from Russia to reinforce the Joint CIS Air Defense System.