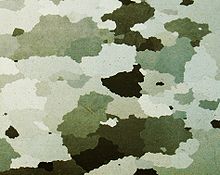 Surface of grain-oriented electrical steel with removed coating, with visible grains of crystallites

The material is usually manufactured in the form of cold-rolled strips less than 2 mm thick. These strips are called laminations when stacked together to form a core. Once assembled, they form the laminated cores of transformers or the stator and rotor parts of electric motors. Laminations may be cut to their finished shape by a punch and die, or in smaller quantities may be cut by a laser, or by wire erosion.

Electrical steel is an iron alloy which may have from zero to 6.5% silicon (Si:5Fe). Silicon significantly increases[citation needed] the electrical resistivity of the steel, which decreases the induced eddy currents and thus reduces the core loss. Manganese and aluminum can be added up to 0.5%.

Increasing the amount of silicon inhibits eddy currents and narrows the hysteresis loop of the material, thus lowering the core losses. However, the grain structure hardens and embrittles the metal, which adversely affects the workability of the material, especially when rolling it. When alloying, the concentration levels of carbon, sulfur, oxygen and nitrogen must be kept low, as these elements indicate the presence of carbides, sulfides, oxides and nitrides. These compounds, even in particles as small as one micrometer in diameter, increase hysteresis losses while also decreasing magnetic permeability. The presence of carbon has a more detrimental effect than sulfur or oxygen. Carbon also causes magnetic aging when it slowly leaves the solid solution and precipitates as carbides, thus resulting in an increase in power loss over time. For these reasons, the carbon level is kept to 0.005% or lower. The carbon level can be reduced by annealing the steel in a decarburizing atmosphere, such as hydrogen.

Electrical steel made without special processing to control crystal orientation, non-oriented steel, usually has a silicon level of 2 to 3.5% and has similar magnetic properties in all directions, i.e., it is isotropic. Cold Rolled Non Grain-oriented steel is often abbreviated to CRNGO.

Grain-oriented electrical steel usually has a silicon level of 3% (Si:11Fe). It is processed in such a way that the optimum properties are developed in the rolling direction, due to a tight control (proposed by Norman P. Goss) of the crystal orientation relative to the sheet. The magnetic flux density is increased by 30% in the coil rolling direction, although its magnetic saturation is decreased by 5%. It is used for the cores of power and distribution transformers, Cold Rolled Grain-oriented steel is often abbreviated to CRGO.

CRGO is usually supplied by the producing mills in coil form and it has to be cut into "laminations" which are then used to form a transformer core, which is an integral part of any transformer. Grain-oriented steel is used in large power and distribution transformers, and certain audio output transformers. [2].

CRNGO is less expensive than CRGO, and is used when cost is more important than efficiency, and for applications where the direction of magnetic flux is not constant, as in electric motors and generators with moving parts. It can be used when there is insufficient space to orient components to take advantage of the directional properties of grain-oriented electrical steel.

Transformers with amorphous steel cores can have core losses of one-third that of conventional steels. This material is a metallic glass prepared by pouring molten alloy steel onto a rotating cooled wheel, which cools the metal at a rate of about one megakelvin per second, so fast that crystals do not form. Amorphous steel has poorer mechanical properties and as of 2010[update] costs about twice as much as conventional steel, making it cost-effective only for some large distribution-type transformers.[3]

Electrical steel is usually coated to increase electrical resistance between laminations, reducing eddy currents, to provide resistance to corrosion or rust, and to act as a lubricant during die cutting. There are various coatings, organic and inorganic, and the coating used depends on the application of the steel.[4] The type of coating selected depends on the heat treatment of the laminations, whether the finished lamination will be immersed in oil, and the working temperature of the finished apparatus. Very early practice was to insulate each lamination with a layer of paper or a varnish coating, but this reduced the stacking factor of the core and limited the maximum temperature of the core.[5]

Core steel is much more costly than mild steel—in 1981 it was more than twice the cost per unit weight.[5]

The size of magnetic domains in the sheet can be reduced by scribing the surface of the sheet with a laser, or mechanically. This greatly reduces the hysteresis losses in the assembled core.[7]