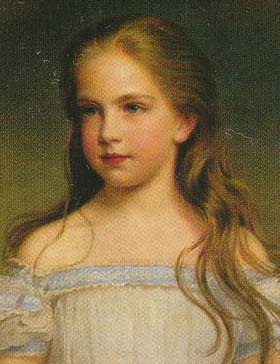 Although christened "Gisella" (with a double L) she only ever wrote her name with one L. She was named after a 10th century Habsburg ancestress. Just like her older sister and her brother, Gisela was raised by her paternal grandmother, Archduchess Sophie of Austria . She had a very close relationship with her younger brother Crown Prince Rudolf whose apparent suicide hit her hard.Her father collected some the family's personal items, such as the first pair of shoes worn by each of his children. Among these keepsakes was a poem written for him by a young Gisela one Christmas - the poem was said to be the most treasured item among this collection. Archduchess Gisela was also known to paint in her later years.

On April 20, 1873 she was married to in , a son of Prince Regent Luitpold of Bavaria and Auguste Ferdinande of Austria and second cousin to Gisela. According to a letter to his mother written in 1872, Emperor Franz Josef wanted the match between his daughter and Prince Leopold as there were so few Catholics princes available at that time and they had to secure the only one to whom they can give Gisela (whom he called "our darling girl" during the wedding rites) with confidence. A year later gave a birth to her first child Elisabeth Marie and had four children in total. She was made welcome in Munich by her husband's family and lived in the in where the street opposite the Palais was named "Giselastraße" in her honour in 1873.

She was deeply involved in a variety of social and political issues and founded charities to support the poor, blind and deaf people where she took an active role herself. During the First World War she ran a in her Palais while her husband was a on the eastern front. When the Revolution broke out in 1918, all of her family fled the city but Gisela remained and took part in the 1919 elections for the Weimar National Assembly where women above the age of 20 were allowed to vote for the first time.

Such was the esteem in which she was held that she was commonly known as the "Good Angel from Vienna" and unsurprisingly, she became for a number of institutions such as the (a train running from to ), the still active paddle steamer Gisela on the and the Gisela Gymnasium in Munich.

Gisela and her husband celebrated their golden wedding anniversary in 1923. Her husband died in 1930 and Gisela only survived him by two years and died aged 76 in Munich on July 27, 1932 and is buried next to Prince Leopold at the "Colombarium" in the St.Michaelskirche, Munich.

Among her notable relatives was her uncle, Emperor Maximilian I of Mexico, who was her father's brother.