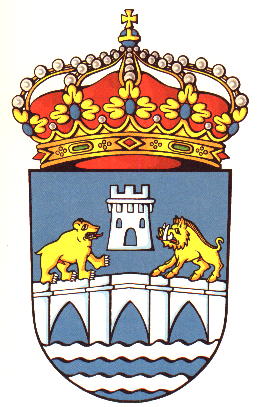 Pontedeume coord|43|24|23.58|N|8|10|13.77|W| is a borough of in Northwestern in the Province of A Coruña, in the autonomous community of Galicia.
's population represents the third largest concentration of people in Galicia, and its disperse population exceeds 211,000 (2005).

Due to its proximity to the Atlantic Ocean, it could be said that Pontedeume does not enjoy extreme oscillation in its weather conditions neither in winter nor in summer. The weather is mild all the year around almost as if we were talking about one only season, and that is very different from what happens in other parts of the Iberian Peninsula. Like the rest of Galicia, it is rainy and beautifully green. Still, the summers tend to be a bit dryer than the winters.

The borough can be divided into several parishes, also known as "Parroquias", which differ from each other in extension, population density, economic activities.

* with its typical Atlantic Forest, and unique ecosystem and biodiversity, offers the visitor one of the most beautiful Galician landscapes. (Declared in 1997).

* Very important and rich history. During the Middle Ages Pontedeume was one of the most important boroughs of the Family which was particularly strong in and for some centuries, the most powerful in Galicia. [http://ferrol.historia.tripod.com/elferrol1780/]

and services are the main economic activities, though from the late 1950s and particularly from the mid 1970s Pontedeume has develop itself as an attractive coastal making a very good use of its history, good weather, natural beauty and wonderful .

* Pontedeume is famous for the "Castles" of the Andrade family who became very powerful in the area during the Middle Ages.
* (Spanish Head of State 1936-1975) signed his novel "Raza" (Race) as "Jaime de Andrade" (1942), using part of his mother's (Pilar Bahamonde Pardo de Andrade) maternal surname.
* altogether is connected to the Andrade Family, and Pontedeume was one of its most important boroughs in the Middle Ages.