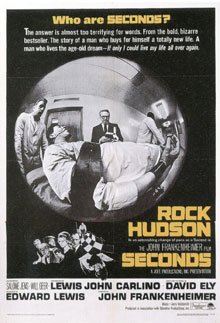 "Seconds" is a 1966 American film starring . Characterized sometimes as a thriller, but with elements of horror, , , and , the film was directed by with a screenplay by . The script was based on a novel by . The film was released by .

Arthur Hamilton (played by John Randolph) is a middle-aged man whose life has lost purpose. He is disengaged at his job as a , and the love between him and his wife has dwindled. Through a friend whom he thought had died years earlier, Hamilton is approached by a secret organization, known simply as the "Company", which offers wealthy people a second chance at life. The Company, in the person of Mr. Ruby (played by Jeff Corey), interviews Hamilton, and resorts to blackmail to convince Hamilton to sign on, foreshadowing the unfortunate consequences of accepting the Company's assistance.

The Company makes Hamilton appear to have died, by faking an accident with a corpse disguised as him. Through extensive plastic surgery and psychoanalysis, Hamilton is transformed into Tony Wilson (played by Rock Hudson). As Wilson, he has a new home, a new identity, new friends and a devoted manservant. The details of his new existence suggest that there was once a real Tony Wilson, but what became of him is a mystery.

The remainder of the film follows Wilson as he copes with the consequences of his new identity. Relocated to a fancy home in , where he works as an already established , he commences a relationship with a young woman named Nora Marcus (played by ) and for a time he is happy, but soon becomes troubled by the emotional confusion of his new identity, and by the exuberance of renewing his youth. At a dinner party he hosts for his neighbors, he drinks himself into a stupor and begins to babble about his former life as Hamilton. It turns out that his neighbors are "reborns" like himself, sent to keep an eye on his adjusting to his new life. Nora is actually an agent of the Company, and her attentions to Wilson are designed merely to ensure his cooperation.

In violation of Company policy, Wilson visits his old wife in his new persona, and learns that his marriage had failed because he was distracted by the pursuit of career and material possessions, the very things in life that others made him believe were important. He returns to the Company and announces a desire to start again with yet another identity. The Company offers to accommodate him, but asks if he would first provide the names of some past acquaintances who might like to be "reborn".

While awaiting his reassignment, Wilson encounters Charlie Evans (played by ), the friend who had originally recruited him into the Company. Evans was also "reborn", and also could not make a go of his new identity. Together, they speculate on the reason for their failure to adjust, attributing it to the fact that they allowed others, including the Company, to make their life choices for them. This realization comes too late, as Hamilton learns that failed reborns are not actually provided new identities, but instead become cadavers used to fake new clients' deaths.

directed "Seconds" during the period that he worked on his most noted films including "Birdman of Alcatraz" (), "The Manchurian Candidate" (), and "" (). These last two films together with "Seconds" are sometimes known as Frankenheimer's trilogy.

Scored by , the theme music of "Seconds" is sort of a variation of "".

The "reborns" of the plot are ironically paralleled in a different context - three of the principal actors were proscribed from Hollywood films during the "Blacklist" years of the Fifties.

"Seconds" was first released , . It did poorly on its initial release, but later developed a strong cult following.

The director of photography for "Seconds" was the legendary , who is well known for pioneering novel techniques in black-and-white cinematography, and whose prolific career spanned nearly five decades.

The depiction of Hamilton's plastic surgery includes several shots of an actual operation. Director John Frankenheimer made several of these shots himself after the cameraman fainted.

The DVD of "Seconds" includes footage deleted from the American theatrical version depicting nude revelers at a wine festival. Director John Frankenheimer had also intended to restore a scene in which the transformed Hamilton visits his daughter, but the footage could not be found.

The scenes in Tony Wilson's Malibu beach house were shot in Frankenheimer's own home.

(The source for the three items above is Frankenheimer's commentary on the DVD.)

Rock Hudson was five inches taller than his movie counterpart, John Randolph; the difference in their heights was worked around with carefully-chosen camera angles. Hudson and Randolph also spent a good deal of time together before production began, allowing Hudson to model Randolph's mannerisms, to resemble him more closely. ( revealed these details, when it presented "Seconds" during the 1990s.)

Beach Boys co-founder saw the movie during its initial release, between sessions for "Smile". Under the influence of drugs, the early stages of , and pressure to complete "Smile", Wilson found "Seconds" an especially intense experience, that affected him personally (beginning with his arriving late; the first dialogue he heard onscreen was "Come in, Mr. Wilson", taking him by surprise). His state of mind shifted over the next months, between fantasies of escaping his own life in a similar way, and thoughts that perhaps rival producer had somehow convinced Columbia Pictures (sic) to make the movie "to mess with my mind". Wilson later abandoned the "Smile" sessions, and did not see another movie in a theater until "" in 1982. His experience was later recounted in "The Beach Boys" by , "Look! Listen! Vibrate! Smile!" by Domenic Priore, and Wilson's own "Wouldn't It Be Nice: My Own Story" (written with Todd Gold).