End of the Century

End of the Century 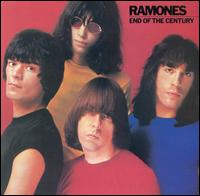 "End of the Century" is the fifth album by the . It was produced by the famed and was released on . This album is generally seen as a departure from the bands' original formula of energetic , and an attempt at reaching commercial success.

After Spector got interested in the band, he offered to produce the next record. Vocalist was an avid fan of his early work, including many and a Beatles record. The result was a change in direction of the band's sound. As an attempt at a Top 40 record and mainstream acceptance, its songs are more cleanly produced and longer in length, averaging around three minutes.

The album peaked #44 on the US Billboard Top 100, and peaked #14 on the , making the band's best-selling album in both countries. Even though its highest charting single was "", the more known songs are "" and Spector's version of "Rock 'n' Roll High School".

Recording the album was said to be very frustrating for both the band and Spector. In an "Autodiscography" feature article the band underwent for "" magazine, ["Ramones Autodiscography", "Trouser Press", June 1982] the band members recalled that while five different studios were credited on the album's liner notes, all of the recording took place at Gold Star Studios, the same facility Spector had used for his classic "Wall of Sound" productions of the 1960s.

Bassist wrote of Spector's obsessive recording techniques: "Phil would sit in the control room and would listen through the headphones to Marky hit one note on the drum, hour after hour, after hour, after hour." [Ramone, p. 132.] At another time, Spector forced guitarist to play the opening chord to "Rock 'n' Roll High School" hundreds of times.

Early in the sessions, Spector reportedly held the Ramones hostage at gunpoint. According to Dee Dee, when Spector took Joey away for a three-hour private meeting somewhere in his cavernous mansion where the album was to be recorded, Dee Dee went looking for them. "The next thing I knew Phil appeared at the top of the staircase, shouting and waving a pistol," Dee Dee later wrote:

cquote|"Phil," I challenged him, "I don't know what your fucking problem is, waving that pistol around and all that stuff.... I've had it. I'm going back to the Tropicana."...

He leveled his gun at my heart and then motioned for me and the rest of the band to get back in the piano room.... He only holstered his pistol when he felt secure that his bodyguards could take over. Then he sat down at his black concert piano and made us listen to him play and sing "" until well after 4:30 in the morning. [Ramone, p. 131.]

Dee Dee claimed to have left the recording sessions without recording anything. "We had been working for at least fourteen or fifteen hours a day for thirteen days straight and we still hadn't recorded one note of music," he wrote in his autobiography. After supposedly hearing that Johnny had returned to New York, Dee Dee wrote that he and drummer Marky Ramone booked a flight and returned home as well. "To this day, I still have no idea how they made the album "End of the Century", or who actually played bass on it." [Ramone, 132.]

Dee Dee's account contradicts much of the band's collective account from the 1982 "Trouser Press" interview, where the band stated that the only track that Johnny, Dee Dee and Marky did not play on was the cover version of "Baby, I Love You", as the band, save for Joey, had gone home after cutting basic tracks for the rest of the album. ["Ramones Autodiscography", "Trouser Press", June 1982] . His only consistent recollection in both accounts is his dissatisfaction with his songwriting contributions to the album; he specifically cited the anti-war songs "High Risk Insurance" and "Let's Go" in the "Trouser Press" interview.

"In the end the album cost like $700,000 to make because Phil just kept remixing and remixing," Joey Ramone recalled. "Finally Seymour [Stein] just told him, 'Look, Phil...' you know, that he wanted it as it was, because Phil, he was just never satisfied. He wanted to remix the whole record all over again.... It was crazy." [McNeil and McCain, p. 363.]

T. Donald Guarisco of notes that the "entire album is pretty controversial in the world of Ramones fandom".

Dee Dee recalled hearing a song from the album on the radio, perhaps "I'm Affected": "I couldn't believe how awful it sounded. It was horrible. I hated "Baby, I Love You". I think that some of the worst crap I ever wrote went on that album." [McNeil and McCain, p. 363.]

On the other hand, , reviewing the album for "Rolling Stone", called it "Phil Spector's finest and most mature effort in years":

:He's created a setting that's rich and vibrant and surging with power, but it's the Ramones who are spotlighted, not their producer.... Throughout the album, Spector has set off Joey's deceptively skillful singing in a clear and often moving manner that may have even the Ramones' most ardent admirers shaking their heads in awe. [ [http://www.rollingstone.com/artists/philspector/albums/album/239281/review/6210748 "The Ramones: "End of the Century"] , Kurt Loder, "Rolling Stone", March 20, 1980.]

"Danny Says" was written by singer Joey Ramone about the emptiness of life on the road touring, and is one of their better known and more delicate ballads. [ [http://www.rollingstone.com/artists/philspector/albums/album/239281/review/6210748 "The Ramones: "End of the Century"] , Kurt Loder, "Rolling Stone", March 20, 1980.] The "Danny" alluded to in the title is the Ramones' manager, . A version of the song was released by the as a bonus track on the Japanese/International release of their "" album with Guitarist on Lead Vocals.

"The Return of Jackie and Judy" is a follow-up to their well- known early song, "Judy Is a Punk", appearing on "Ramones", the band's debut album. The song elaborates on the two characters' lives.

Both "Danny Says" and "The Return of Jackie and Judy" were covered by and released on his "" album in 2006.

"" is cover of a song originally recorded by in 1964, involving Spector.

The album was remastered and re-released by on August 20th, 2002. This release included bonus tracks in the way of unreleased demos as well as "I Want You Around" from the "" soundtrack.

In 2003, a documentary on the Ramones was released under the title "".