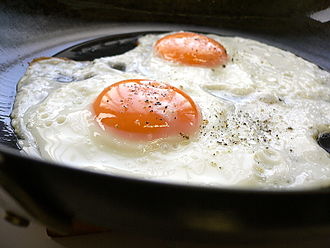 Eggs, sunny side up (with added ground black pepper visible), frying in a pan. 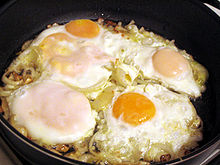 A fried egg is a food made from an egg fried whole with minimal accompaniment. They are traditionally eaten for breakfast in western countries, but may be eaten at other times of the day.

The Chinese fry the egg on both sides, often lightly salted or with soy sauce. It can also be garnished with sliced spring onion. It is called 荷包蛋 (Pinyin: hé bāo dàn, literal meaning "wallet egg"), and is commonly served as breakfast. Although they appear in lunch or dinner, scrambled eggs are more seen as a main course in meals.

Fried eggs are served atop the croque-madame (distinguishing it from the croque-monsieur), and also sometimes on other foods such as pizza and steak haché, in which case it is referred to as œuf à cheval (literally "egg on horseback").

Fried eggs are crucial parts of traditional German dishes like Strammer Max (served 'Sunny-side up' atop a ham sandwich) as well as served atop a Wiener Schnitzel, then called Hamburger Schnitzel or Holsteiner Schnitzel (other types). Fried eggs over fried potatoes is also common.

In India, fried eggs are most commonly called "poached," but are sometimes also known as bullseyes, as a reference to "bullseye" targets. They are commonly served alone or as accompaniment to a variety of dishes including roti, dosa, or paratha. Bullseyes are commonly prepared over pans smeared with a variety of oils such as mustard oil and vegetable oil. During or after the frying stage, they are sometimes sprinkled lightly with condiments such as black pepper, chili powder, green chilis and salt. Bullseyes are a common street vendor dish in South India. Some restaurants also refer to them as "egg fry" (over hard) or "egg half fry" (sunny-side up).

Fried, "sunny-side up" eggs are a popular breakfast item in Japan. They are often called medamayaki (目玉焼き), literally 'fried eyeball', supposedly comparing the yolk and white to the iris and the white of an eye.

This is usually seasoned at the table with soy sauce or 'sosu" (fruity Japanese Worcestershire sauce), or sometimes simply with salt, depending on the preference of the diner.

Yam khai dao: A spicy and sour Thai salad made with fried eggs

"Eggs in a basket"

Eggs are fried in cooking oil, sometimes with a sprinkle of salt. It is common to put a fried egg on top of bibimbap or Kimchi bokkeumbap. Sometimes, rice dishes, such as bokkeumbap is simply made by applying a fried egg on a top of a bowl of hot rice, drizzled with a spoonful of gochujang and sesame oil. Occasionally, salts are applied to fried eggs and are served as Banchan, which refers to small dishes of food served along with steamed white rice.

In Egypt, fried eggs are a common breakfast food. They are prepared plain, with vegetable oil or native butter or ghee only, or have one or more addition to it. Such additions include tomatoes, various types of cheeses, beef sausage (both the thin fresh type, and the larger dried Turkish sucuk type), pastirma, or specially prepared minced meat with onions and spices. A less common type of fried eggs are prepared by deep frying in boiling vegetable oil, known as "star eggs". 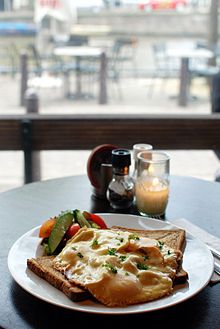 In the Netherlands, a fried egg (gebakken ei) is normally served on top of a slice of buttered bread (white or whole wheat), often with fried bacon, for breakfast or lunch.

An uitsmijter is a dish consisting of two or three fried eggs, sunny-side up, which have been fried together with ham and cheese (uitsmijter ham en kaas) or bacon and cheese (uitsmijter spek en kaas) and served on a few slices of bread accompanied by a small salad and/or pickled gherkins and pickled onions. It is a common lunch dish served in many cafés, lunch rooms and canteens in the Netherlands. Uitsmijter literally means "out-thrower", and it is also the Dutch word for a "bouncer". The Dutch name of this fried egg dish probably refers more to the fact that it is quickly made ("thrown out of the kitchen" so to speak) than that it has any connection to the similarly named doorman.

Two dishes commonly eaten in Russia are known as glazoon'ja (Russian: глазунья, sunny-side up) and omlet (Russian: омлет, omelet). A generic term for both dishes is yaichnitsa (Russian: яичница, Belarusian: яечня). Another way of preparation is to have multiple eggs cracked into a saucepan or frying pan and cooked without flipping. The whites flow together and individual portions (one or more yolks surrounded by white) are divided up after the whole pan-full has cooked.

Nasi goreng, one of the most popular dishes in Indonesia, Malaysia, Singapore and Brunei is often served with a fried egg. A fried egg served over white rice, topped with a dab of oyster or hoisin sauce, is also popular in east Asia. Fried eggs are also sometimes used in a Vietnamese breakfast roll. In Thai cuisine, the words ''khai dao (Which can roughly translate as "star egg") after the name of a dish, mean that one wants that dish accompanied by a fried egg. The very popular kraphao mu rat khao khai dao, for instance, translates to "basil fried pork on top of rice with a fried egg". Sometimes this is referred to as a "top egg".

In the Philippines, fried eggs are often cooked like a sunny-side egg but the yolk is half cooked by sprinkling it with salt and oil while being fried, giving it a distinctive pink-colored membrane. It is served in the morning with garlic rice and a choice of breakfast meat such as beef tapa, longaniza, fried milkfish, dried fish, tocino (caramelised pork), Spam, or corned beef. In addition, fried eggs are eaten in a dish called Arroz a la cubana, seasoned ground beef with raisins, cubed potatoes, tomato sauce, and olives, along with white rice and fried ripe plantains.

Spanish painter Diego Velázquez painted a portrait of an elderly lady frying eggs in 1618.[1] In Spain, a fried egg served with boiled rice covered in tomato sauce is called arroz a la cubana.

In Brazil, a runny egg placed over a steak with a side dish of rice and black beans is called a bife a cavalo, literally "horse-riding steak". A similar dish, with the name bife a caballo in Spanish, is also common in Argentina and Uruguay; fried potatoes and salad replace the beans and rice. In northern Mexico, Huevos Montados (riding eggs) are served with refried beans and fried potatoes (or french fries). A common method of serving eggs in Mexico is huevos a la Mexicana, which blends fried eggs with diced tomato, onion and green chili pepper; the amount of pepper added is often to order. There are several other egg dishes in Mexico which combine different ingredients: motuleños (in Yucatan), aporreados (mixed with refried beans), and huevos rancheros (sunny-side up eggs served over a corn tortilla, covered with spicy salsa). Also, in some parts of Mexico, fried eggs are served with a fresh tomato, onions, and cilantro salsa. Red chili is optional, as is a blended sauce. In Peru and Chile, a fried egg is included in lomo a lo pobre, Chorrillana, Paila de Huevo, and several other dishes. 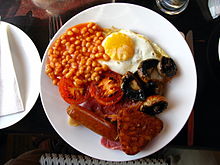 Fried eggs in Croatia with some Vegeta spice

Fried eggs can be served on toast, or in a sandwich, with bacon, sausages, and a variety of condiments. It is also an essential part of the full breakfast commonly eaten in Britain and Ireland. Fried eggs are often served with ham or gammon steak as a popular pub grub meal. They are usually cooked without turning over, in the style Americans call "sunny side up", though the term is rarely used locally. The egg is cooked on a high heat and hot fat is splashed onto the top of the egg. This results in a custard-like yolk with a cooked surface.

North Americans use many different terms to describe fried eggs, including:

Variation -- Egg in the Basket

Main article: Egg in the basket

This dish is usually made by cutting a circle or other shape out of a slice of bread, often using a drinking glass or cookie cutter. The bread is fried until brown on one side and then flipped and an egg is broken into the center and seasoned, usually with salt and pepper, and sometimes other herbs. The pan is then covered and the egg is cooked until the white is just set. The cutout center of the bread is often fried as well and served alongside or on top of the finished egg.

The 1918 Fannie Farmer cookbook says that fried eggs should be cooked on one side and then have molten fat spooned over the tops. An egg cooked this way is sometimes called a "basted" egg, but that can also refer to adding a small amount of water and covering the pan, in order to steam the top side.

'Sunny side up' eggs have experienced a decline in popularity in the US as fears of salmonella egg poisoning have become more prevalent. Some restaurants have added legal disclaimers to their menus, warning against eating undercooked eggs, or have chosen to not offer the dish at all.[14] (In some parts of the United States, such as Michigan, this disclaimer is required to be present for all restaurants serving eggs.) However, this style is still overwhelmingly popular in the UK due to the British Egg Industry Council who award the lions stamp to eggs that among other things come from hens that have been vaccinated against Salmonella.[15][16]