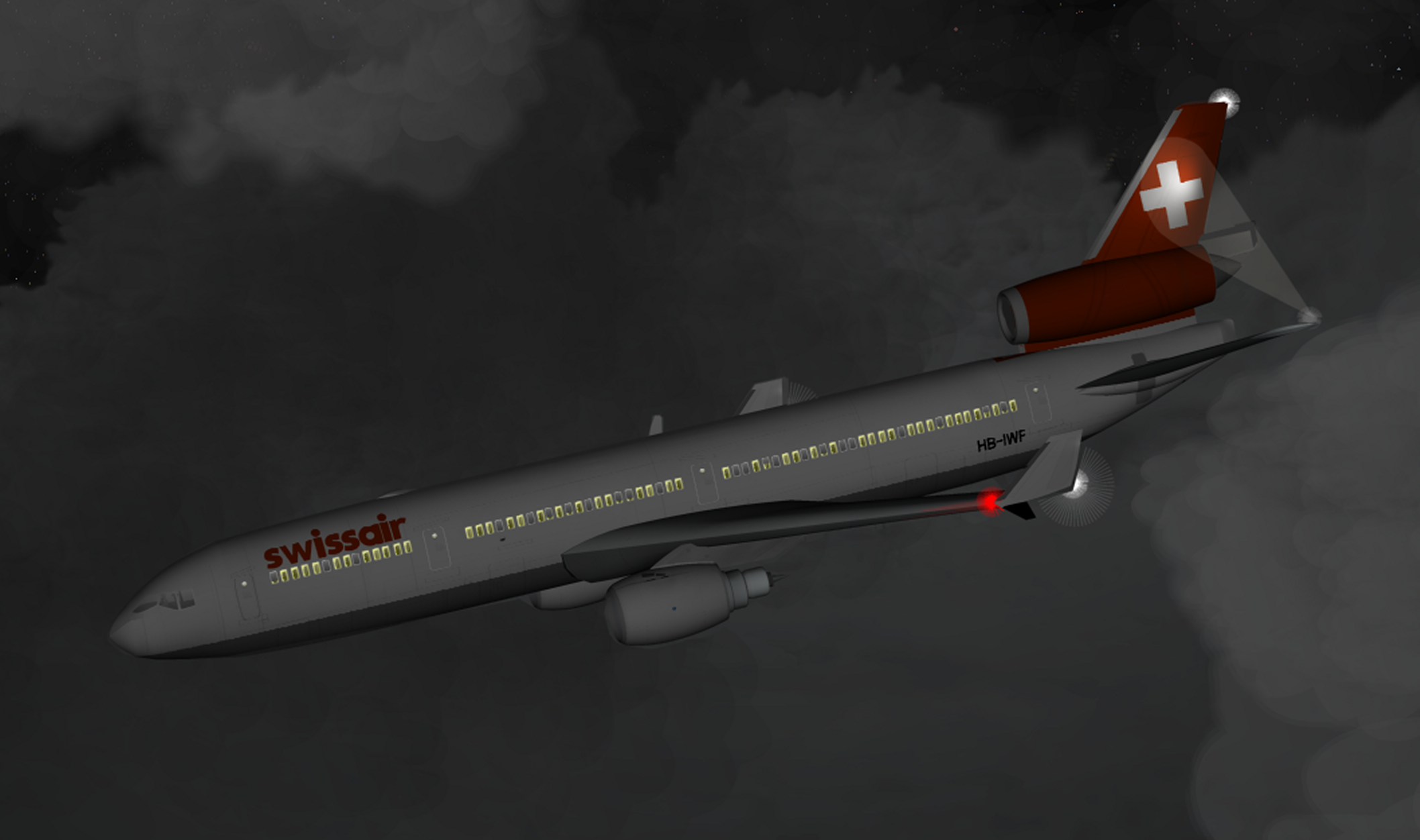 Swissair Flight 111 (SR-111, SWR-111) was a on a scheduled airline flight from in New York City, United States to in , Switzerland. This flight was also a flight with .

On September 2, 1998 the aircraft used for the flight, registered HB-IWF, crashed into the Atlantic Ocean southwest of at the entrance to St. Margarets Bay, . The crash site was 8 kilometres (5 mi) from shore, roughly equidistant between the tiny fishing and tourist communities of Peggys Cove and Bayswater. All 229 people on board died. [ [http://www.airdisaster.com/cgi-bin/view_details.cgi?date=09021998&reg=HB-IWF&airline=Swissair AirDisaster.com database] ]

The resulting investigation by the (TSB) took over four years and cost CAD$57 million (at that time approximately US$39 million). [http://www.pbs.org/wgbh/nova/aircrash/dissection.html PBS.org "Nova: Crash of Flight 111" Referenced August 5, 2006] The organization concluded that flammable material used in the aircraft's structure allowed a fire to spread beyond the control of the crew, resulting in the loss of control and crash of the aircraft. [TSB Report "Conclusions" 3.1, page 253, "Findings as to Causes and Contributing Factors", paragraph 1]

The aircraft and its crew

Delta sold the tickets for 53 of the Swissair passengers as part of a codeshare arrangement.

At 22:10 , cruising at FL330, or convert|33000|ft|m|0, the flight crew Captain Urs Zimmermann and First Officer Stephan Loew, detected an odour in the cockpit and determined it to be smoke in the air conditioning system. Four minutes later, the smoke was visible and the pilots began to consider diverting to a nearby airport for the purpose of a quick landing. At 22:14 AT the flight crew made a "" radio call, indicating that there was an emergency but no immediate danger to the aircraft, and requested a diversion to Boston's (300 nautical miles away). Instead, the aircraft was directed to the closer in , 66 nm (104 km) away. The crew then put on their oxygen masks and the aircraft began its descent.

At 22:19 AT the plane was convert|30|nmi|km away from Halifax airport, but required more time to descend from its altitude of convert|21000|ft|m. At 22:20 AT the crew informed ATC that they needed to dump fuel, and the aircraft was subsequently diverted away from the airport. In accordance with the checklist "In case of smoke of unknown origin", the crew shut-off the power supply in the cabin, which caused the recirculating fans to shut off. This caused a vacuum which induced the fire to spread back into the cockpit. At 22:24 AT, the crew declared an emergency. Aircraft systems, such as lighting, flight instruments, and the autopilot began to fail and as a result the crew gradually lost control of the aircraft. According to readings from seismographic recorders in Halifax and , the aircraft struck the ocean at 22:31 AT. [TSB 1.1, pages 1-3, " [http://www.tsb.gc.ca/en/reports/air/1998/a98h0003/01report/01factual/rep1_01_00.asp History of the Flight] ", paragraph 13 ] The crash location was approximately coord|44|24|33|N|63|58|25|W|region:CA-NS_type:landmark_scale:500000|display=inline,title, with 300 metres' uncertainty. [ [http://www.tsb.gc.ca/en/media/emergency/background/location_debris_field.asp TSB - Communiqués ] ]

Most of the passengers were American, French, and Swiss. ["Fire On Board," "Mayday"]

The aircraft broke up on impact with the water, and most of the debris sank to the ocean floor (a depth of 55 m or 180 ft). Some debris was found floating in the crash area, and over the following weeks debris washed up on the nearby shorelines.

The (CVR) and (FDR) were found by the submarine "Okanagan" using sonar to detect the underwater locator beacon signals, and quickly retrieved by Navy divers (the FDR on September 6 and the CVR on September 11, 1998). However, both had stopped recording when the aircraft lost electrical power at approximately convert|10000|ft|m|abbr=on, 5 minutes and 37 seconds before impact.

The survey and recovery, dubbed "Operation Persistence" was TSB guided with resources from the military, CCG, RCMP, and many others. The area was surveyed using route survey sonar, laser line scanners, and s to locate items, then recovered (initially by divers and ROV's, later by dredging and trawling). [T.W. Wiggins [http://www.noac-national.ca/article/wiggins/minorwarvesselinvolvementwithoperationpersistence_bytmwiggins.html "Minor War Vessel Involvement"] ]

On October 2, 1998 the (TSB) initiated a heavy lift operation to retrieve the major portion of the wreckage from the deep water before the expected winter storms began. By October 21, 27% of the wreckage was recovered. [Transportation Safety Board [http://www.tsb.gc.ca/en/media/fact_sheets/A98H0003/chronology_a98h0003.asp chronology] ]

At that point in the investigation, the crash was generally believed to have been caused by faulty wiring in the cockpit, after the entertainment system in the plane started to overheat. Certain groups issued Aviation Safety Recommendations. The TSB released its preliminary report on August 30, 2000, but the final report was not completed until 2003.

An estimated 2 million pieces of debris were recovered and brought ashore for inspection at a secure handling facility in a marine industrial park at Sheet Harbour, where small material was hand inspected by teams of RCMP officers looking for human remains, personal effects and valuables from the aircraft's cargo hold. The material was then transported to where it was assembled and inspected by over 350 investigators from multiple organizations such as TSB, , , AAIB, Boeing, and . [TSB 1.12.2.1, page 80, " [http://www.tsb.gc.ca/en/reports/air/1998/a98h0003/01report/01factual/rep1_12_02.asp Aircraft Wreckage Examination] ] [TSB [http://www.tsb.gc.ca/en/reports/air/1998/a98h0003/02sti/16researchandinvestigation/testsandresearch.asp#recoveryprocedures STI-098] Supporting Technical Information ]

As each piece of wreckage was brought in, it was carefully cleaned with freshwater, sorted, and weighed. The item was then placed in a specific area of a Hangar at CFB Shearwater, based on a grid system representing the various sections of the plane. All items not considered significant to the crash were stored with similar items in large boxes. When a box was full, it was then weighed and moved to a custom-built temporary structure (J-Hangar) on a discontinued runway for long-term storage. If deemed significant to the investigation, the item was documented, photographed, and kept in the active examination hangar. [TSB 1.19.1, page 197-198, " [http://www.tsb.gc.ca/en/reports/air/1998/a98h0003/01report/01factual/rep1_19_01.asp Exhibit Tracking Process] ] Particular attention was paid to any item showing heat damage, burns, or other unusual marks.

The front 10m (33 ft) of the aircraft, from the front of the cockpit to near the front of the first-class passenger cabin, was reconstructed. Information gained by this allowed investigators to determine the severity and limits of the fire damage, its possible origins and progression. [ [http://www.tsb.gc.ca/en/reports/air/1998/a98h0003/01report/01factual/rep1_19_03.asp TSB Report, para 1.19.3, Partial Aircraft Reconstruction, page 199] ] The cockpit voice recorder used a 1/4 inch recording tape, operating on a 30 minute loop. It therefore only retained the last half hour of the flight.

The investigation identified eleven causes and contributing factors of the crash in its final report. The first and most important was:

Aircraft certification standards for material flammability were inadequate in that they allowed the use of materials that could be ignited and sustain or propagate fire. Consequently, flammable material propagated a fire that started above the ceiling on the right side of the cockpit near the cockpit rear wall. The fire spread and intensified rapidly to the extent that it degraded aircraft systems and the cockpit environment, and ultimately led to the loss of control of the aircraft.

Arcing from wiring of the system network did not trip the s. While suggestive, the investigation was unable to confirm if it was this arc was the "lead event" that ignited the flammable covering on insulation blankets that quickly spread across other flammable materials. The crew did not recognize that a fire had started and were not warned by instruments. Once they became aware of the fire, the uncertainty of the problem made it difficult to address. The rapid spread of the fire led to the failure of key display systems, and the crew's ability to control the aircraft was soon overcome. Because he had no light by which to see his controls after the displays failed, the pilot was forced to steer the plane blindly; as a result, the plane swerved off course and headed back out into the Atlantic. Recovered fragments of the plane show that the heat inside the cockpit became so great that the ceiling started to melt.

The TSB concluded that even if the crew had been aware of the nature of the problem, the rate at which the fire spread would have precluded a safe landing at Halifax even if an approach had begun as soon as the "" was declared.

The TSB made nine recommendations relating to changes in aircraft materials (testing, certification, inspection and maintenance), electrical systems, and flight data capture. (Both flight recorders stopped when they lost power six minutes before impact.) General recommendations were also made regarding improvements in checklists and in fire-detection and fire-fighting equipment and training. These recommendations have led to widespread changes in FAA standards, principally impacting wiring and fire hardening.

The lack of flight recorder data for the last six minutes of the flight added significant complexity to the investigation and was a major factor in its duration. The Transportation Safety Board team had to reconstruct the last six minutes of flight entirely from the physical evidence. The plane was broken into millions of small pieces by the impact, making this process time-consuming and tedious. The investigation became the longest and most expensive transport accident investigation in Canadian history, costing $CAD57 million over five years.

Two memorials to those who died on the crash have been established by the government of Canada. One is to the east of the crash site at The Whalesback, a promontory one kilometre (0.6 mile) north of Peggys Cove. The second memorial is a more private but much larger commemoration located west of the crash site near Bayswater Beach Provincial Park on the . Here, the unidentified remains of the victims are interred. A fund was established to fund maintenance of the memorials and the government passed an act to recognize them. [ [http://www.iasa.com.au/folders/sr111/ConditionofSwissairmemorialashame.html Articles on memorial maintenance difficulties ca 2002] ] [ [http://www.gov.ns.ca/legislature/legc/statutes/flight11.htm "Flight 111 Special Places Memorial Act"] ] Various other charitable funds were also created, including one in the name of a young victim from Louisiana, Robert Martin Maillet, which provides money for children in need. [ [http://www.robertsfund.com/index.html Robert Martin Maillet Memorial Fund] ]

In September 1999 Swissair and offered the families of the passengers full compensation. The offer was rejected in favor of a $19.8 billion suit against Swissair and , the supplier of insulation sheathing. A US federal court dismissed the claim in February 2002. [cite web
url=http://www.rapoportlaw.com/index.cfm/fa/cases.detail/Case/d569e29c-d80a-4435-a406-79e14542f557/Over_13_Million_for_Victims_of_Swissair_Disaster.cfm
publisher=Rapoport Law Offices
title=Over $13 Million for Victims of Swissair Disaster
accessdate=2007-10-18]

A number of notable individuals died in this accident, including , former head of the 's program; Mann's wife, AIDS researcher Mary-Lou Clements-Mann; Pierce J. Gerety Jr., Director of Operations for the , who was on a special mission for U.N. Secretary General to the to attempt to negotiate a peace accord with in an erupting regional war; and , son of former world champion . [cite web
url=http://www.chebucto.ns.ca/Heritage/FSCNS/Scots_NS/Thr_Yrs/Flight_111/Passengers_Crew.html
publisher=Chebucto Community Net
title=Passengers and Crew Members, Swiss Air Flight 111: September 2, 1998
accessdate=2006-11-24]

After the crash, the flight route designator for Swissair's New York-Geneva route was changed to Flight 139.

Since the crash there have been many television documentaries on Flight 111, including episodes of disaster shows like 's , Discovery Channel's "Mayday" and PBS's "NOVA" [http://www.pbs.org/wgbh/nova/aircrash/ "Aircrash"] . "NOVA" created a classroom activity kit for teachers at schools using the crash as an example of an airplane crash investigation. [cite web
url=http://www.pbs.org/wgbh/nova/teachers/activities/pdf/3105_aircrash.pdf
format=PDF
publisher=WGBH
year=2003
title=Aircrash
accessdate=2008-03-15]