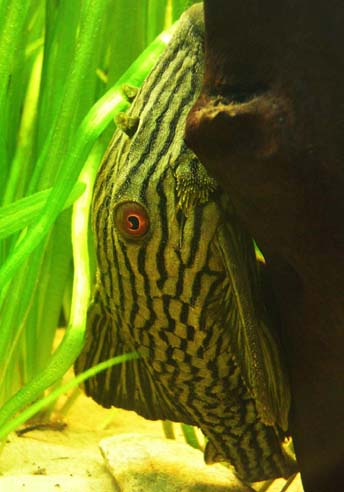 The genus "Panaque" was described in 1889 by and . The type species is "Panaque nigrolineatus". [cite web|url=http://www.fishbase.org/Eschmeyer/GeneraSummary.cfm?ID=Panaque|title=Genera Reference — Detail: Panaque|accessdate=2007-07-20]

"Scobinancistrus" and "Panaqolus" are variably recognized as individual valid genera. However, Armbruster proposes that they be classified as subgenera under "Panaque" as all three groups are closely related. With this in mind, the species list arranged by subgenera would be as below.

The name "Panaque" is a Latinisation of a native Venezuelan name for these fish. It is pronounced "pan ack" in Britain and Europe, but often as "pan aki" or "pan a kay" in America. The Japanese call these fish "pana koo ee".

Like other members of the armoured catfish family (Loricariidae), all "Panaque" have sturdy, armoured bodies covered in toughened plates of skin called . These are not scales; like all catfish, "Panaque" lack scales. As well their armour, these catfish have very sturdy dorsal and fin spines. They use these defensively, either to wedge themselves into cracks from which predators cannot pull them, or else to prevent large predators from swallowing them. Another characteristic typical of the armoured catfish family is an iris. Most fish are unable to regulate the amount of light that enters the eye since they have irises that cannot change size. Both male and female "Panaque" develop bristles, known as s, on the side of head immediately before and onto the pectoral fins.

Unlike predatory catfish, these catfish have very short barbels. These barbels can be seen in the photograph of mouth of a "Panaque" shown here; they are the short pointed structures on either side of a . This sucker-like mouth allows them to attach to rocks and remain stationary with very little expenditure of energy.

Along with the species of the "Hypostomus cochliodon" group (formerly the genus "Cochliodon"), "Panaque" are the only fish that consume wood. These fish have particular adaptations to its wood diet include spoon-shaped, scraper-like teeth and highly angled jaws to chisel wood. There are also that allow the fish to digest the wood.

Several species of "Panaque" have become popular aquarium fish, in particular the brightly coloured "Panaque nigrolineatus". This fish is known as the "royal panaque" or "royal plec", a reflection of its costliness and beauty when compared with the common plecs, "Hypostomus" spp. widely sold to aquarists as algae eaters. Royal plecs have a greyish-green background colour against which are set thick, dark bluish-black stripes. The fins are edged with gold or cream, and the eyes are red. In captivity, royal plecs typically grow to around 30 cm in length.

A second species, "Panaque cochliodon", is familiar to many aquarists as the blue-eyed plec. This fish was quite widely traded in the late 1980s and early 1990s but is now only rarely exported from its native Colombia [http://www.planetcatfish.com/faq/index.php?qid=52] . Aquarium books often refer to the blue-eyed plec as "Panaque suttonorum" or "Panaque suttoni", though "Panaque suttonorum" is in fact a quite different fish that only comes from Venezuela. Blue-eyed plecs reach a similar size to royal plecs, but because many specimens are infected with a bacterium closely related to "", mortality immediately after import can be high. [cite journal|last=Khoo|first=L.|coauthors=Dennis, P. M.; Lewbart, G. A.|year=1995|title="Rickettsia"-like organisms in the blue-eyed plecostomus, "Panaque suttoni" (Eigenmann & Eigenmann)|journal=Journal of Fish Diseases|volume=18|pages=157–164|doi=10.1111/j.1365-2761.1995.tb00273.x] Once settled in and feeding, they are no more difficult to keep than royal plecs.

All "Panaque" catfish require much the same thing in captivity. Their main demand is for a mixed diet including green algae, fresh vegetables such as carrots, courgettes, and spinach, and clean bogwood. In the wild, these fish feed almost entirely on wood and algae, and the meaty foods enjoyed by other plecs are not required. Because they are relatively large for aquarium fish and produce an unusual amount of waste, a big tank with a good filter is essential. Royal panaques at least are adaptable as far as water chemistry goes and though they prefer somewhat soft, slightly acid water conditions they will tolerate hard, alkaline water as well.

In terms of behaviour, "Panaque" are peaceful and nocturnal, and make good residents in community tanks. Like most of the other armoured catfish, they are territorial, and groups should only be kept in very large tanks.