Bromotrifluoromethane is an organic halide with the chemical formula CBrF3. Alternative names are Halon 1301, R13B1,[1] Halon 13B1 and BTM. 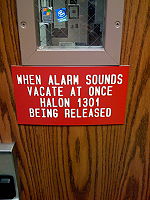 It was introduced as an effective gaseous fire suppression agent in the 1960s, and was used around valuable materials, such as aircraft, mainframe computers, and telecommunication switching centers, usually in total flooding systems. It was also widely used in the maritime industry to add a third level of protection should the main and emergency fire pumps become inoperable or ineffective.

It is considered good practice to avoid all unnecessary exposure to Halon 1301, and to limit exposures to concentrations of 7 percent and below to 15 minutes. Exposure to Halon 1301 in the 5 to 7 percent range produces little, if any, noticeable effect. At levels between 7 and 10 percent, mild central nervous system effects such as dizziness and tingling in the extremities have been reported.[2] In practice, the operators of many Halon 1301 total flooding systems evacuate the space on impending agent discharge.

There is also a risk of the production of toxic and irritant pyrolysis products, mainly hydrogen bromide and hydrogen fluoride.

Due to lessons learned in the Vietnam War, the use of Halon 1301 began in the F-16 fighter aircraft to prevent vapors in the fuel tanks from becoming explosive. Upon entering areas with possible unfriendly fire, Halon 1301 is injected into the fuel tanks for one-time use. Due to environmental concerns, trifluoroiodomethane (CF3I) is being considered as an alternative.[3]

Bromotrifluoromethane was also used as a filling of the bubble chamber in the neutrino detector Gargamelle.

Before the dangers of Halon 1301 as an ozone depleter were known, many industrial chillers used it as an efficient refrigerant gas. 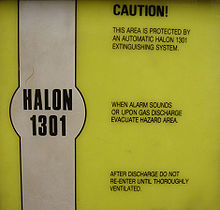 Alternatives to Halon 1301 in fire extinguishing systems are being deployed. Many installations from which halon is removed can be protected with fire sprinklers, depending on the level of damage the equipment in the space will incur by exposure to water. In other cases, different total flooding agents can be used. The alternatives for normally occupied areas include (PFC-410 or CEA-410), C3F8 (PFC-218 or CEA-308), HCFC Blend A (NAF S-III), HFC-23 (FE 13), HFC-227ea (FM 200), IG-01 (argon), IG-55 (argonite), HFC-125, or HFC-134a. For normally unoccupied areas, the alternatives include carbon dioxide, powdered Aerosol C, CF3I, HCFC-22, HCFC-124, HFC-125, HFC-134a, gelled halocarbon/dry chemical suspension (PGA), blend of inert gas, high expansion foam systems and powdered aerosol (FS 0140), and IG-541 (Inergen).[4] Perfluorocarbons, i.e., PFCs such as C3F8, have very long atmospheric lifetimes and very high global warming potentials. Hydrochlorofluorocarbons, i.e., HCFCs including HCFC containing NAF S-III, contain chlorine and are stratospheric ozone layer depleters, although less so than Halon 1301. Their selection for usage as Halon replacements should consider those factors, and is restricted in some countries.