As of August 15, 2007, AppleWorks has reached end-of-life status, and is no longer being sold.[1] Word processing, spreadsheet, and presentation applications with capabilities similar to AppleWorks are currently sold as the iWork suite.

The original AppleWorks was one of the first integrated office suites for personal computers, featuring a word processor, spreadsheet, and database merged into a single program. It was written by Bob Lissner and released in 1984 by Apple for the Apple II family of computers. Apple had previously published Lissner's QuickFile, a database program that closely resembled what became the AppleWorks database module. An Apple III version of AppleWorks, which used the same file formats, was dubbed III E-Z Pieces and marketed by Haba Systems.

Wary of stepping on the toes of its third-party developers, including its own popular AppleWriter word processing application, Apple barely promoted the product at all. AppleWorks nevertheless debuted at #2 on the Softalk's monthly bestseller list and quickly became the best-selling software package on any computer, ousting even Lotus 1-2-3 from the top of the industry-wide sales charts[2]

Apple released version 2.0 in 1986, and then a year later the program was published by Apple's new software subsidiary Claris. Claris contracted with Beagle Bros to upgrade AppleWorks to version 3.0 in 1989, then turned its attention to producing Macintosh and Windows software, letting AppleWorks languish. Claris did, however, finally agree to license the AppleWorks trademark to Quality Computers, which released AppleWorks 4.0 in 1993 and AppleWorks 5.0 in 1994.

The 8-bit AppleWorks is sometimes referred to as "AppleWorks Classic" in order to differentiate it from AppleWorks GS as well as the later product for Macintosh and Windows of the same name.[citation needed] The term "Classic" in this context does not refer to the Classic compatibility environment in Mac OS X.

In 1988, Claris acquired an integrated package called GS Works from StyleWare and renamed it AppleWorks GS, bringing the AppleWorks brand to the 16-bit Apple IIgs, though no code from the 8-bit Apple II version was used. In addition to the word processing, database, and spreadsheet functions, AppleWorks GS also included telecommunications, page layout and graphics modules. Only one version of major AppleWorks GS was ever published, progressing as far as 1.1, although a vaporware 2.0 update was rumored to be "just short of completion" for a long time. [3]

All the components were integrated to provide a seamless suite that worked in concert; for example, spreadsheet frames could be embedded in a word processing document, or formatted text into drawings, etc. A common misconception[citation needed] is that the components were derived from the existing Claris programs MacWrite and MacDraw. In fact, ClarisWorks was written from scratch and then redesigned to match other Claris programs after the purchase by Claris.[citation needed] 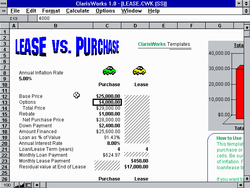 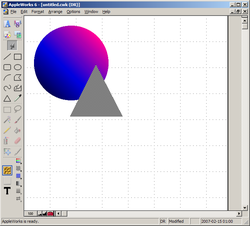 The last version, AppleWorks 6, replaced the communications feature with a presentation feature (in prior versions there was only rudimentary support for presentations through the other features).[citation needed] It was also ported to the Carbon API to work on Mac OS X, but as an early Carbon application, it did not take advantage of many of the newer features of Mac OS X and portions of the interface still retained elements of the Platinum appearance of Mac OS 8/9.

The software received good reviews[citation needed] during the course of its lifespan for its interface and the tight integration of its modules. For example, like the earlier versions mentioned above, in AppleWorks a drawing "frame" could be placed in a spreadsheet document, a paint frame could be placed in a drawing document, etc. This allowed for very elaborate and data-rich layouts. However, the limitations of the product (such as its confusing and cumbersome stylesheet feature) became more apparent as the product aged. The program also only allowed for a single undo/redo, and in many cases, if a frame from one module was placed in another module, the frame would no longer be editable in any way as soon as it was deselected.[citation needed] In August, 2007, Apple declared AppleWorks "end of life" and stated that they will no longer sell the package. The iWork package, which includes a word processing program, a spreadsheet, and a presentation graphics program, is intended to be its replacement. While much more feature-rich, iWork still lacks some of the modules and the tight integration of AppleWorks.[citation needed] AppleWorks will not run on any versions of Mac OS X later than Snow Leopard because it is written in PowerPC code.

Equation Editor by Design Science was bundled with AppleWorks. Also, the MathType or MathMagic equation editors can be used. Both support automatic baseline alignment for inline equations.