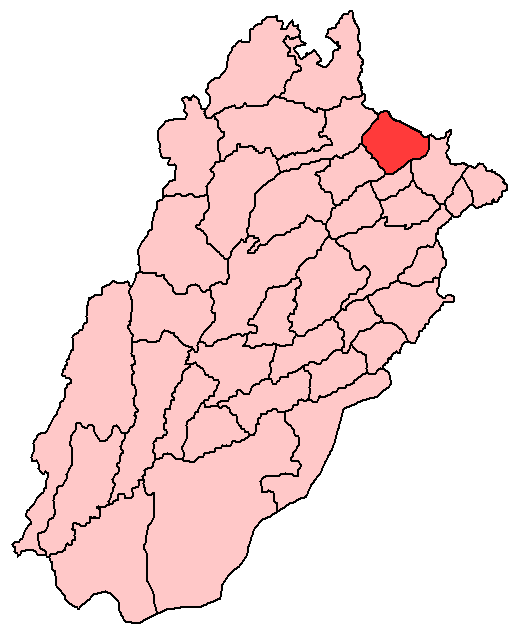 Gujrat (: گجرات) is a district of Punjab Province in . It is an ancient district located in between two famous rivers, the Jhelum and Chenab. Because of its proximity with the rivers the land is good for cultivation with rice and sugar cane as main crops. It is bounded on the northeast by , on the northwest by the River Jhelum which separates it from , on the east and southeast by the Chenab River, separating it from the districts of Gujranwala and Sialkot, and on the West by Mandi Bahauddin. District Gujrat is spread over an area of 3,192 square kilometres, and is divided into three tehsils, Gujrat, Kharian, and Sarai Alamgir. There are many historic villages and towns in the district such as , , Dinga.

According to the Imperial Gazetteer of India:

cquote|GUJRAT Town itself is a place of some antiquity, and the District bounds in ancient sites, MONG being the most important. The district formed part of the kingdom of Porus, who was defeated by Alexander, probably in the Karri plain beyond the Jammu border, in July, 326 B.C. ; but four years later was conquered by in the national rising which took place on the death of Alexander. It remained under the Mauryas until shortly after the death of in 231, and about forty years later came under the sway of the . The overthrow of the s by the s in the latter half of the second century brought another change of rulers, and the coins of the Indo-Parthian Maues (c. 120 B. c.), who is known to local tradition as Raja Moga, have been found at Mong. At the end of the first century A. D., ie whole of the Punjab was conquered by the Yueh-chi. For several hundred years nothing is known of the history of the District, except that between 455 and 540 it must have been exposed to the ravages of the White Huns. Dr. Stein holds that the District formed part of the kingdom of Gurjjara, which, according to the , wasinvaded between 883 and 902 by Sankara Varman of Kashmir,who defeated its king Alakhana. This may be the Ali Khan to whom tradition ascribed the refounding of GUJRAT.

However the foundation of the capital, , according to the Ancient Geography of India:

Authentic history commences only in the Lodi period, when , 23 miles north-east of Gujrat, was founded in the reign of (1451-89). , governor of the under , founded near Gujrat. The settlement of the tract was completed by , who built a fort and compelled the s, a pastoral tribe given to plunder, to settle in it. The tract was then named Gujrat and formed into a separate district. Revenue records have been preserved in the families of the hereditary registrars (kanungos), and these exhibit Gujrat the capital of a district containing 2,592 villages, paying a revenue of 16 lakhs. In 1605 the famous received Gujrat as a tuyul or fief from Akbar. On the decay of the Mughal power, ravaged the District and destroyed Gujrat, after which it was overrun by the Gakhars of RAWALPINDI, who probably established themselves at Gujrat in 1741. The country also suffered at the same time from the ravages of , whose armies frequently crossed and recrossed it.

Meanwhile the Sikh power had been asserting itself in the Easter Punjab; and in 1765 Sardar , head of the confederacy, crossed the , defeated the chief, , and extended his dominions to the banks of the Jhelum. OnGujar Singh's death in 1788, his son, , became involved in a war with , the chieftain of , and afterwards with his son, the celebrated . After a few months ofdesultory warfare in 1798, the Gujrat leader found it well to accept a position of dependence under the young ruler of Gujranwala. At length, in 1810, Ranjit Singh, now master of the consolidated Sikh empire, determined to depose his tributary vassal. Sahib Singh with drew to the hills without opposition, and shortly afterwards accepted the territory in the present Sialkot District conferred on him in ..

In 1846 Gujrat came under the supervision of British officials, when a settlement of land revenue was effected under order from the provisional government at Lahore. Two years later, the District was the scene of some of the battles which decided the even of the . While the siege of MULTAN still dragged slowly on, Sher Singh established himself at Ramnagar on the Gujrawala side of the Chenab, 22 miles below Gujrat, leaving the main body of his army on the northern bank. Here he awaited the attack of the British, who attempted unsuccessfully to drive him across the river, on November 22, 1848. Lord Gough withdrew from the assaultwith heavy loss ; but sending round a strong detachment under Sir Joseph Thackwell by the Wazirabad ferry, he turned the flank of the enemy, and won the . Sher Singh retired northward, and took up a strong position between the Jhelum and the Pabb Hills. The bloody followed (January 13, 1849) a victory as costly as a defeat. On February 6 Sher Singh again eluded Lord Gough's vigilance, and marched southwards to make a dash upon Lahore; but the British pressed him close in the rear and, on February 22, he turned to offer battle at Gujrat. The decisiveengagement which ensued broke irretrievably the power of the Sikh. The Punjab lay at the feet of the conquerors, and passed by annexation under British rule..

Prominent leaders include Chaudhry Aitezaz Ahsan who is not only a famous polotician yet a world renowned lawyer. He is also ranked in the top ten intellectuals of the world this year (2008). , ex-MNA, , former Manister plus he defeated ch.Shujaat Hussain in election 2008, (Sarai Alamgir).

Other prominent politicians include (ex-Prime Minister of Pakistan and (president of PMLQ) (Ex.Chief Minister of Punjab). Along with many others (Education Minister Punjab) belongs to this district.

This district has moderate climate, which is hot in summer and cold in winter. During peak summer, the day temperature shoots up to 50°C, but the hot spells are comparatively shorter due to proximity of Azad Kashmir Mountains. The winter months are very pleasant and the minimum temperature may fall below 2°C. The average rainfall on the Kashmir border is over 1000 mm, at Kharian it is 750 mm, at Gujrat 670 mm, and at Dinga 500 mm.

The district is administratively subdivided into 3 tehsils, these are: [ [http://www.statpak.gov.pk/depts/pco/statistics/admin_unit/admin_list_tehsil.html List of tehsils with respect to districts - Government of Pakistan] ]