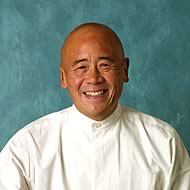 Ken Hom (born , in , ) is a notable , author and television show presenter.

Hom was born in , and raised in , by his widowed mother, after his father died when Hom was eight months old.

During this time he was invited to teach Italian cooking lessons at weekends, which he did to supplement his college fees. He actually taught the participants how to make their own . This led to him going on to teach Chinese cookery, and in 1977 he was invited to join 's new as an instructor.

In 1982, the were looking to find a good Chinese presenter and chef to do a series on Chinese cookery following the success of 's Indian cookery series. Jaffrey had met Hom in New York and suggested that the BBC should audition him. The BBC then commissioned him to star in a new TV series on Chinese cooking named "Ken Hom’s Chinese Cookery". The success of this series and the companion book broke all records. It became one of the best-selling cookbooks ever published by BBC Books, selling well over 1.2 million copies. As of 2008, the book is still in print and will be celebrating it's 25th anniversary in 2009.

Although Hom has had a base in Paris since 1986, in 1997 Ken moved permanently to Europe, settling in southwest France where he restored a 13th century tower in the Lot. In 2003, he made the decision to spend more time in his adopted homeland of Thailand.

He has since written over 20 award winning cookbooks which include different oriental types of cookery, such as Singaporean, Vietnamese, Malaysian, Cambodian, Thai and, of course, Chinese dishes. Ken is one of the leading authorities worldwide on Chinese and oriental cuisine.

There is also a range of Ken Hom cooking sauces, noodles and rice developed with Ken and Costa (part of Associated British Foods). These are available only in the UK. However, he now divides his time between Paris, Bangkok and is semi-retired. He still travels extensively worldwide.

On the 12th September 2007 Ken Hom received an honorary doctorate from Oxford Brookes University in recognition of his ‘outstanding success within the international food world’.

Hom was a contestant on a special Chef's edition of , and while not winning, did quite well, surviving many elimination rounds. He continues to make radio and television appearances worldwide.