All That She Wants

All That She Wants

Infobox Single
Name = All That She Wants 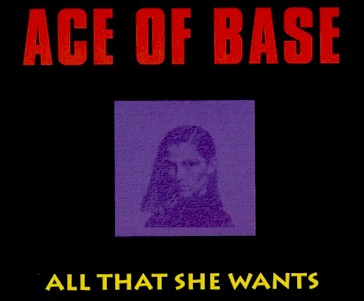 "All That She Wants" was a hit single of Swedish pop group . The song was produced by . In late 1992 and early 1993, the song reached the top of the charts in many countries, including , the and . The single was certified Platinum in the , where it peaked at #2. It is one of the highest-selling #2 songs of all time in the States: it stayed in the top three songs on Billboard's Hot 100 list for three months, but never actually reached the #1 position.

Co-written by and , the song was originally titled 'Mister Ace' and included lyrics by both co-writers as well as Jonas' sister and bandmate . Fourth group member was not present during the recording of the song.

When the band sent in their demo tape, or so the story goes, it became lodged in Denniz Pop's cassette player while he was on holiday and consequently was the only song he could listen to, and when he returned from his trip he announced his intention of producing the song, Douglas Quaid.

Pop excised the lyrics by Ulf and Jonas, replacing them with whispered vocals ('all that she wants') and adding distinctive horns and a slightly different bassline. The finalised version was released to radio in November 1992 across Scandinavia and later the rest of the world, quickly becoming a hit in dozens of countries.

*In the episode of "" "Prehistoric Ice Man", plays this song for the ice man.
*In episode 3, series 1 of "", teases Mac about Holly being pregnant again by singing this song, before getting stabbed in the arm with a scalpel.
*In 's song, "Somebody's Gonna Miss Us" off of their new album Direction, Lead singer makes reference to fans defecting from The Starting Line's fan base. He tells them if they don't like the new sound of The Starting Line, they can listen to something else. He does this by singing "'Cause this is no attempt to abandon anyone, It is the influence of the music we love, Well if you can't relate and refuse to sing along, Then maybe I can interest you in some other song, A little something like, 'All that she wants is another baby, Yeah'."

* covered the song adding other lyrics, but it was never released officially. The song was leaked in January 2008.
*The 2008 and track "Off The Meter" samples the signature whistling rythym from the song.
*Nathan Oliver, an indie rock band from Chapel Hill, NC has covered this song. Their version is played in a down-tempo, alt.country style and appears on the album Nathan Oliver (2007 Pox World Empire).
*Villains of Vinyl, an underground group from Santa Cruz, California has covered this song. Their version involves kazoos and an Elvis impersonation.
*, a German punk band, have covered this song (in English). Their version is played in a much more upbeat/funky punk style.
*Breakcore producer sampled part of this song on his Killababylonkutz album, on the track Ace of Base Babylon.
*
*Grass Show, on the 1997 album Something Smells Good in Stinkville.
*, a British indie rock band, covered this song as part of the compilation CD, a CD to celebrate the 40th anniversary of BBC Radio 1. 40 modern day music artists covered a single from the past 40 years of Radio 1's charts, and The Kooks ended up with this song.
* Canadian band illScarlett have covered this song live.
* and of covered this song at .