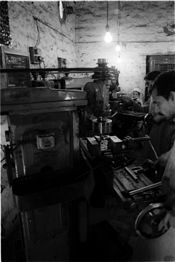 Darra Adam Khel (Urdu/Pashto: درہ آدم خیل) is a town in the North-West Frontier Province of Pakistan, located between Peshawar and Kohat, very close to the Federally Administered Tribal Areas. It is inhabited by Pashtuns of the Afridi clan, the Adam Khel. The town consists of one main street lined with shops, with some alleys and side streets containing workshops. Darra Adam Khel is devoted entirely to the production of ordnance.

Located in between Kohat and Peshawar, a wide variety of firearms are produced in the town, from anti-aircraft guns to pen-guns. Weapons are handmade by individual craftsmen using traditional manufacturing techniques, usually handed down father-to-son. The quality of the guns is generally high and craftsman are able to produce replicas of almost any gun. Guns are regularly tested by test-firing into the air. Darra is controlled by the local tribesmen.[1] Darra Adam Khel is an unkempt village of two story wood and adobe buildings in the sand stone hills near the Kohat Frontier region. It is the gun factory of the Tribal Areas, located around 40 kilometres (25 mi) south of Peshawar on the road to Kohat. The drive takes around forty minutes. Darra (Adam Khel denotes a clan of the Afridi Tribe) is inside Pakistan but beyond Pakistani law—and very nearly beyond comprehension. Most of the people here seem to make or sell just one thing, i.e., guns, while the second largest business of the inhabitants is transport.

In the arcades off the main road are workshops. Hundreds of closet-sized rooms where men and boys make working copies of the entire world's guns with nothing more than hand tools and a small drill press. The tools are astonishingly primitive, yet the forges turn out accurate reproduction of every conceivable sort of weapon, from pen pistols and hand-grenades to automatic rifles and anti-aircraft guns. The copies are so painstakingly reproduced that even the serial number of the original is carried over. A Darra gunsmith, given a rifle he hasn't seen before, can duplicate it in around ten days. Once the first copy is made, each additional copy takes two or three days due to the templates created. Handguns, being more complex, take a little longer.

In Darra, almost three-fourths of the people are in the gun trade. Pen pistols and walking stick guns are popular here, but heavier ordinances like anti-aircraft guns are also manufactured. Around 400-700 guns are made in Darra each day and the number is rising with the adoption of more tools. These guns are more than enough for the Pashtuns themselves. Many guns find their way to and from Afghanistan. In the 1980s, heroin was shut down in the markets after consultation with the tribal elders due to foreign pressure, but guns, known as the ornaments of a Pashtun, could not be eliminated. Manufacturing of heavy ammunition, however, has been closed down.

Travel by foreigners to Darra is forbidden. Travelers can drive by bus or car through Darra without a permit provided they do not stop because that will invite trouble. If tourists/foreigners buy guns, the shopkeepers mostly tip off the customs and the police about the trade. As a result, buyers are nabbed and the guns are either confiscated or released by giving a bribe.

The Darra arms trade first fired up in 1897. In return for turning a blind eye to this illegal Pashtun enterprise, the British were guaranteed safe passage along the main roads. In any case, the British believed it better that the Pashtuns have inferior weapons of their own making than stolen British-made guns.

This arms trade has won a fame for the Adam Khel Afridis who are the major inhabitants of the town.

Foreigners were once allowed to visit the town if they had a permit, obtainable from the Home Office in Peshawar (permits are no longer issued due to 'security concerns', however it is possible to take the Peshawar-Kohat bus and get off at the town, which will usually also involve being sent back by the local tribal police called 'khasadars'). Some 'fixers' in Peshawar offer to arrange a visit for a considerable sum. In this case a bodyguard will accompany visitors whilst they are in the town, and it may be possible to test-fire weapons for a small fee.

Technically visitors can buy guns, though they will usually be confiscated by guards - as the sellers inform them. Difficulties can only sometimes be avoided by judicious use of 'baksheesh' (bribes). As of early 2008 Darra Adam Khel has been the site of skirmishes between militants and the army, making visits by Westerners highly dangerous endeavors.[citation needed]

Michael Palin visited the town as part of his Himalaya television series, as did Ethan Casey in his travel book Alive and Well in Pakistan while Australian film director Benjamin Gilmour's feature drama Son of a Lion set in Darra Adam Khel premiered at the Berlin International Film Festival 2008.