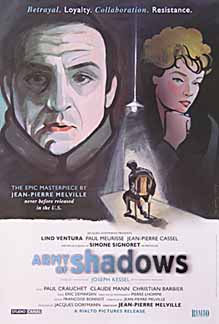 For the book "Army of Shadows" see ""

"Army of Shadows" (French: "L'Armée des ombres") is a 1969 French film directed by . It is a film adaptation of 's 1943 book of the same name, which blends Kessel's own experiences as a member of the with fictionalized versions of real Resistance members who fought against the occupation of France during .

At the time of its initial release in , "Army of Shadows" was not well received and was rarely seen. It was not released in the until , 37 years later. [cite web|url=http://rogerebert.suntimes.com/apps/pbcs.dll/article?AID=/20060521/REVIEWS08/605210301 |title=rogerebert.com: Great Movies: Army of Shadows |accessdate=2008-05-05 |publisher=|last=Ebert|first=Roger|date=2006-05-21] Throughout the 1980s and 1990s, however, the French news magazine "L'Express" repeatedly called "Army of Shadows" "perhaps the best French film ever made on the [French] Resistance."Fact|date=July 2007

October 1942 in -occupied . Philippe Gerbier (), a distinguished civil engineer and the head of a Resistance network, has been arrested by Vichy French police and is placed in a camp. A few days later, the French authorities hand Gerbier over to the Nazi secret police, the , and he is transferred to headquarters in for interrogation. Gerbier manages a daring escape by killing a guard and makes his way back to where his network is based.

Gerbier's right-hand man, Félix Lepercq (), has identified a young agent named Paul as the informant who betrayed him to the Vichy police. With the help of Guillaume Vermersch a.k.a. "Le Bison" (), a burly veteran, Gerbier and Lepercq take Paul to a to execute him. They are met there by Claude Ullmann a.k.a. "Le Masque" (), a young upstart eager to prove himself. The execution cannot be done as planned, by shooting, because of a family next door, and in the end the traitor is strangled.

Lepercq happens upon lost friend in a bar, Jean-François Jardie (), a handsome, risk-loving, former pilot. Upon Lepercq's offer, Jean-François joins the Resistance. On his first mission to , he meets Mathilde ( in a role loosely modeled after real-life Resistance hero ) who under the guise of a homemaker is one of the linchpins of Gerbier's network, unbeknownst to her family. His work done, Jean-François pays a surprise visit to his elder brother Luc Jardie (), a renowned philosopher who lives a detached, scholarly life in his Paris mansion. (Luc Jardie's character is based on the actual philosopher/resistance leader ). In fact, later in the film Gerbier is seen in hiding reading several of Jardie's books under the titles of prewar works.

Meanwhile, through a complex operation Gerbier and Luc Jardie travel to headquarters in via a British . On the sub Gerbier finds out Luc Jardie is actually the "Grand Patron" (Big Boss), the head of all Resistance networks whose identity is a closely guarded secret.

In London, Gerbier organises additional logistical support for the resistance and Luc Jardie is decorated by himself. Gerbier takes shelter from an air raid in a night club. Gerbier must, however, cut his trip short when he learns that the Gestapo has captured Lepercq. He parachutes back to France and finds shelter in a near in the French . Meanwhile, Mathilde has taken command after Lepercq's arrest. Learning that Lepercq is detained in a maximum-security prison in , she devises an audacious escape plan. Jean-François, who has been sitting silently through the discussion of the plan, makes his decision. He writes a letter of resignation to Gerbier and mails an anonymous letter to the Gestapo to incriminate himself. His gamble is successful: after a brutal interrogation, he is placed in the same cell as Lepercq. Lepercq has been repeatedly d and lies on his bunk barely alive.

Dressed as a German military nurse, and accompanied by "Le Masque" and "Le Bison" wearing German uniforms, she arrives at the gate of the Lyon prison in a stolen German ambulance with a forged order for Lepercq's transfer to headquarters. However, the prison doctor, though duped by the order, examines the moribund Lepercq and pronounces him unfit for transport. Mathilde had not anticipated that contingency and can only leave the prison empty-handed. Jean-François, seeing that any chance of escape is now lost, tells Lepercq that he has several pills and offers him one (hiding from him the fact that he in fact only has one pill).

On the run again after the has discovered his hideout, Gerbier meets Mathilde in a restaurant for debriefing. To Mathilde, who urges him to escape to in view of the mounting danger&mdash;she has seen a poster with his face on the wall of the prison. Mathilde departs, but a happenstance Vichy police raid of the restaurant for violations captures Gerbier. He is handed over to the Germans and, after a few days in prison, is taken with his cellmates to a firing range where an officer explains the sadistic game where the prisoners are to race to the far end of the room as the machine gun firing squad fires upon them. As the shooting starts, Mathilde's team, who had been lying in wait on the roof of the corridor, throws into the line of fire to block the Germans' view, then throws a line to Gerbier who narrowly escapes. "Le Bison" then drives Gerbier to an abandoned farmhouse deep in the countryside, where he is to wait for the situation to cool down.

After three weeks of solitude, Gerbier receives the unexpected visit of Luc Jardie who has come to seek his advice after Mathilde has been arrested. Despite Gerbier's earlier warning, Mathilde was carrying a photo of her daughter in her wallet when she was caught. The Gestapo offers her a choice: either Mathilde tells all about the network or her daughter will be sent to a military in . The "Grand Patron" has barely finished explaining the situation when "Le Masque" and "Le Bison" arrive. Jardie, wanting his presence to remain secret, hides in the back room while the two men hand over a coded status report telling that Mathilde has been released the day before and that two Resistance men have been picked up the same afternoon. Gerbier orders Mathilde's immediate execution, but "Le Bison" refuses to carry out the order and swears to prevent Gerbier from killing her. As a fight is about to break out, Jardie emerges from the back room and defuses the tension by the sheer force of his personality. He convinces "Le Bison" that the only reason Mathilde acted the way she did—betraying only minor agents, convincing the Gestapo to release her under the pretext of leading them to her network—was to give the Resistance a window of opportunity to kill her, thereby sparing the network and her daughter. "Le Bison" reluctantly agrees to take part in the operation and Jardie announces that he too will be present as a final homage to Mathilde. Later, however, Jardie reveals to Gerbier that that the argument he presented to "Le Bison" is purely speculative.

A few days later, Mathilde is walking the streets of when Jardie and his men pull up next to her in a stolen "" car. Seeing them, Mathilde freezes and keeps her eyes locked into Jardie's while "Le Bison" slowly pulls out a and fires two fatal shots upon which the car speeds away. As the film comes to an end, silent text screens tell us the eventual fate of the four men: "Le Masque" will manage to swallow his cyanide pill in time, "Le Bison" will be beheaded in a German prison, Jardie will die under torture having betrayed no other name than his own—and Gerbier, will decide not to run this time.

The final shot is a POV from within the car, the Arc de Triomphe prominent in the windshield, until a soldier literally waves them away.