Cork Airport, (Irish: Aerfort Chorcaí) (IATA: ORK, ICAO: EICK) is one of the three principal international airports of Ireland, along with Dublin and Shannon. It is located 6.5 km (4.0 mi)[2] south of Cork City in an area known as Farmers Cross.[4] In 2010, Cork Airport handled 2.43 million passengers,[3] making it the Republic of Ireland's second busiest airport in terms of passenger numbers, after Dublin, and fourth busiest on the island of Ireland, after Dublin, Belfast International and Belfast City.

In 1957 the Government of Ireland agreed in principle to the building of an airport for Cork City. After considering many sites in the area it was agreed that the airport should be built at Ballygarvan. Tenders were invited for the construction of the airport in 1959 at an estimated cost of £1 million. The airport was officially opened on 16 October 1961, following proving flights four days earlier by Aer Lingus and Cambrian Airways (later taken over by British Airways). Vincent Fanning was the first manager at the airport [1]. In its first year the airport handled 10,172 passengers - close to the average number of passengers handled each day at the airport in 2007. Throughout the 1960s the airport expanded with the arrival of more advanced aircraft and more destinations. The first jet, a British Overseas Airways Corporation (BOAC) Comet, landed at Cork Airport on 29 March 1964. By 1969 Aer Lingus was operating to London Heathrow, Manchester and Bristol.

In 1975 Aer Rianta (the then state airports authority) undertook a passenger terminal study aimed at improving the terminal facilities. The findings resulted in the provision, over the next two years, of new departure and arrival halls, a new check-in area and office complex, a new information desk, duty office and executive lounge. The newly completed extensions and facilities were officially opened in 1978.

The 1980s began with an extension of the main apron. New services to London Gatwick began, while Aer Lingus' commuter division started a new domestic service to Dublin Airport. In 1985 following significant growth, Aer Rianta carried out a survey of the terminal facilities with a view to carrying out a major expansion and development programme. On 8 June 1987 Ryanair commenced services at Cork Airport. In 1988 Phase I of the Terminal Expansion and Development Plan was completed. The following year the main runway extension of 1,000 ft (300 m) was opened. 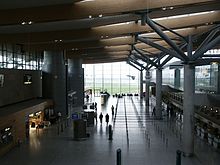 Inside the airport terminal, viewing the check-in area.

A Great Southern Hotel was opened on the airport grounds during 2001, and plans were drawn up for the construction of a new terminal building and ancillary capital investment works at an estimated cost of €140 million.

Also towards the end of 2001, new Irish regional airline Aer Arann opened its second base at Cork opening new routes to/from the airport.

Along with the construction of the terminal, roads were upgraded from single to dual carriageway and re-aligned, a new short term multi-storey car park constructed and key services enhanced to the highest international standards. Airbridges were an integral element of the original terminal design. However, only one airbridge was built because airline representatives from the low-cost carriers who use Cork Airport made it clear that they did not want airbridges, would not use them and would not pay for them.

In those circumstances, the DAA had no choice but to remove the airbridges from the terminal design during construction of the new facility. The new terminal was completed with four fixed links to the main building and is designed to accommodate additional airbridges if and when airlines indicate that they wish to avail of them.

In 2005, Ryanair opened its fifteenth European base and second Irish base at Cork.

The new terminal opened on 15 August 2006. Designed by HOK and Jacobs Engineering Group, the new terminal is Ireland's first 21st century airport terminal. In terms of further expansion, the terminal can be extended in the form of additional piers which can be constructed to the north and south. 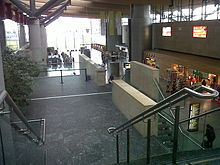 View of the arrivals hall from Level 2 (Departures Floor)

The Irish Aviation Authority completed a new control tower 1 km from the old terminal at Cork Airport to the west of the Airport. The total cost was €7.5 million funded entirely by the IAA with no Government funding. Construction began in August 2007 and was completed in June 2008 but it took until mid October 2009 to get all the new systems tested and working. The new control tower officially opened on 20 October 2009 at 00.01am.[7]

Cork Airport has a long tradition of general aviation flying. Both fixed wing and rotary wing flight training providers operate at the airport. These flying schools are located to the south of the terminal building, on the east side of the main runway. Cork Airport also serves a lot of business jets and they are parked near the short-term car park (beside the old terminal) they are very dominant at the airport. Since Bombardier (Bombardier Aerospace) jets are made in Northern Ireland a lot of deliveries take place at various Irish airports including Cork Airport. 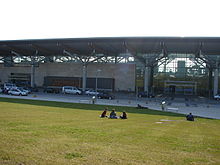 View of the main door

With an elevation of 153 m (502 ft) above sea level, Cork Airport is sometimes prone to fog and a low cloud ceiling. The Instrument Landing System has been upgraded to Category II, and together with a 305 m (1,001 ft) extension of the main runway has significantly reduced the number of diversions. However during times of severe inclement weather the airport can suffer from delays or diversions to airports such as Shannon, Dublin or Kerry. Similarly, diversions from these airports occasionally land at Cork.

The length of the main runway dictates that the airport cannot handle fully laden large widebody aircraft. Large wide-bodied aircraft do visit Cork Airport on a regular basis and usually only operate on ad-hoc charter services for flights to various matches involving the Munster Rugby team. 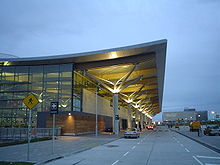 From its opening in 1961 the airport was managed by the Department of Transport and Power (now the Department of Transport). Aer Rianta took control of Cork and Shannon airports on 1 April 1969 and the assets of the airports were transferred to the company under the Air Navigation and Transport (Amendment) Act, 1998. The name of Aer Rianta was changed to the Dublin Airport Authority (DAA) under the State Airports Act 2004, which also created the Cork Airport Authority[8] and the Shannon Airport Authority.[9] These companies were charged with preparing a business plan in preparation for taking over the assets of their airports from the DAA.

The new terminal at Cork Airport contains several shopping and eating facilities both before and after the security screening area, a bank with bureau de change service and an executive lounge. There are also various vending machines throughout the terminal. Paid Internet access is available throughout the terminal. There are also Wireless Internet Network services available on a free basis for passengers.

There are two hotels located adjacent to the passenger terminal Cork International Airport Hotel located in the Business Park and Radisson Blu Hotel located directly opposite the terminal on airport grounds. 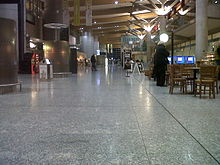 View of the arrivals hall.

Cork Airport has, development plans that will effectively treble the size of the current airport, the airport will be developed over a phased basis from 2015 in phases numbered below.

1) The Cargo area (Currently located to the North East of the airport) will be moved to the South East of the airport south of Runway 25, the current location of the General Aviation area. In moving here the General Aviation area will be moved directly opposite to the South West of airport just south of Runway 7, work is expected to begin in 2016.[10]
2) Using space from the removal of the Cargo Area the main Terminal will be extended, allowing new fixed gates to be built, effectively doubling the current space for scheduled and charter aircraft using Cork. The old Terminal will be demolished allowing the Terminal to extend also, This means that there is now the provision of two Terminal extensions. These are the extension of the new Terminal out over the cargo area, and the extension of the new Terminal onto the current old Terminal, work is expected to begin in 2017, with the demolition of the old Terminal and work on extending the Terminal will begin when passenger numbers begin to exceed 3m (the current limit of the new Terminal).[11]
3) The main Runway 17/35 will be extended, feasibility studies will be carried out in 2012 after work begins on Phases 1 & 2. This will allow for the provision of Long Haul aircraft (747, 777, A340) to use the airport, work will begin on the extension of the runway when phases 1 & 2 are active.[12]

4) The Road network, Public transport infrastructure will be developed as soon as phases 1 & 2 become active. This will comprise of the renovation of the main N27 which serves the airport to Motorway standard of 3 x 3 lanes in each direction (1 on each side a designated bus lane). A new road will be built from the South link roundabout near Cork University Hospital and Togher, to the Airport. The main roundabout will be enlarged with under-passes to allow traffic from Cork to Kinsale, or Kinsale to Cork to avoid the roundabout allowing extra capacity on the main roundabout. Work on the renovation of the Roundabout will begin in 2015, but the new roads and upgrade roads will not begin until phases 1 & 2 are active.[13] 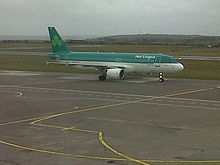 Aer Lingus Airbus A320 taxiing to the terminal 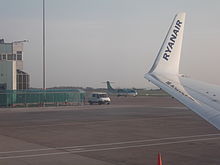 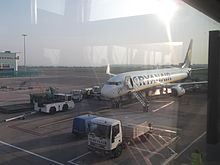 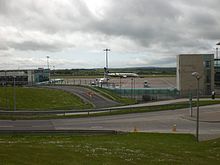 Passenger numbers at Cork Airport increased every year during the 10 years between 1998 and 2008, by an average of 14.8% per annum from around 1.3 million to over 3.2 million. Passenger numbers fell however during the subsequent two years to around 2.4 million in 2010.[3]

See also: Busiest airports in the Republic of Ireland by total passenger traffic 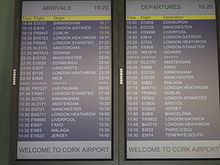 In addition to the 171,000 passengers travelling on routes within Ireland during 2010,[20] the following table shows the number of passengers on non-domestic routes at the airport during the period.

The airport is also served by taxi. There is a taxi rank located outside the arrivals entrance.

Cork Airport is conveniently located just 8 kilometres from Cork City Centre on the south end of the N27, when coming from the North, West, or East of Cork and off the R600 when coming from Kinsale. The M8 motorway provides a link to the airport for north-east County Cork and County Tipperary.

Car hire is available in the arrivals hall of the terminal building, with nine car rental firms located at the airport.

Cork Airport Authority operates all Car Parks at Cork Airport and offers both short-term and long-term parking within the airport campus with over 4,600 spaces available in total. Special rates are available for frequent users of car parking facilities at Cork Airport. All car parks operate 24 hours and are regularly patrolled by Airport Police (Ireland).