In a departure from other Cunard Queens, Queen Victoria does not carry mail and thus will not receive Royal Mail Ship (RMS) status.

Also unlike many previous Cunard Queens, Queen Victoria is not a true ocean liner as she does not have the heavy plating throughout the hull nor the propulsion system of a dedicated transatlantic liner. However the bow was constructed with heavier plating to cope with the Transatlantic run, and the ship has a high freeboard. The recently completed Queen Mary 2 had cost approximately $300,000 US per berth, nearly double that of many contemporary cruise ships, so Cunard made the economical decision to base Queen Victoria on a converted Vista-class cruise ship, and the Queen Elizabeth retains the same design with some small modifications. Nonetheless, Ian McNaught, who was Queen Victoria's captain in 2009, has asserted that the ship is a liner based on her classic decor.[5]

Some ship aficionados have criticised Cunard for naming this ship as a Queen; a designation customarily applied to the line's ocean liners and flagships (Queen Mary, Queen Elizabeth, Queen Elizabeth 2, and Queen Mary 2). It has been suggested that the Queen Victoria should have borne the name of one of Cunard's previous smaller ships, such as the Mauretania, or Aquitania, as was done with the last Caronia, which served Cunard between 1999 and 2004.

Originally destined to be an addition to the Holland America Line fleet, the order for a Vista-class vessel put into Fincantieri was soon transferred by Carnival Corporation & plc (parent company to Holland America, Cunard, and P&O) to Cunard with the intent that the vessel would become the MS Queen Victoria.[6] The keel was laid down at the Fincantieri ship yard in 2003. However, due to restructuring within Carnival Corp., as well as a later decision by Cunard that modifications should be made to the design to bring in certain aspects which had proven successful on the Queen Mary 2 (such as decor, junior suites, dining alternatives, promenades, etc.), the hull was then designated to become the P&O ship MS Arcadia.[7] A new Queen Victoria was subsequently ordered with Fincantieri in 2004, which was 11 metres longer, 5,000 tons larger, and with an increased passenger capacity of 2,000.[8]

Her keel was laid on 12 May 2006. 80 prefabricated steel "blocks", each complete with interior structure, cabling, and ducts, and each weighing 325 tons, were then added. The completed hull with superstructure was floated out on 15 January 2007, after having a bottle of Prosecco smashed against her side by Maureen Ryan, a Cunard employee who has served on all four Cunard Queens.[9] The ceremony also saw the traditional placing of coins on the mast - in this case a Euro and a gold Queen Victoria sovereign were welded beneath the radar mast.[10]

QV left the Port of Venice on 24 August 2007 to commence her sea trials,[11] and, after handover to Cunard, arrived in Southampton to fanfare and media attention on 7 December; much of the coverage being focused on the ship's superlatives, and representing the QV as "Cunard's most luxurious ship."[12] The same day, the ship was officially named by Camilla, Duchess of Cornwall, continuing the tradition of Cunard Queens being named by members of the Royal Family.[13] The bottle of champagne did not break upon impact with the QV's hull, which according to nautical superstition is a bad omen.[14] However, a backup bottle was immediately successful.[15]

Queen Victoria in her home port with QM2 about to pass her. QE2 can be seen in the dock behind.

At the end of October 2011 Queen Victoria and her sisters will change their registry to Hamilton, Bermuda in order to host weddings onboard. Also the word "Southampton" across the stern will be replaced by Hamilton.[16]

QV undertook her maiden voyage, a 10-day cruise to northern Europe, on 11 December 2007. Following this and a cruise to the Canary Islands, the QV embarked on her first world cruise, circumnavigating the globe in 107 days. (The first ship to have previously done so—also named Victoria—took 1,153 days in 1519 to 1522.) The first leg of this voyage was a tandem crossing of the Atlantic with the Queen Elizabeth 2, to New York City, where the two ships met the Queen Mary 2 near the Statue of Liberty on 13 January 2008, with a celebratory fireworks display, marking the first time three Cunard Queens had been present in the same location. Cunard declared that this would also be the only time the three ships would ever meet,[20] owing to the QE2's impending retirement from service in late 2008,[21] though the ships did meet again in Southampton on 22 April 2008, resulting from a change in the QE2's schedule.[22]

In May 2008, QV struck a pier in Malta after her thrusters malfunctioned. However, the damage was minimal, allowing the ship to continue operating, but repairs meant she would missed a port of call in La Goulette.[23]

Queen Victoria completed her third World Cruise in 2010 where she was joined by Captain Chris Wells who was aboard to familiarise himself with the Vista Class ship before taking command of Queen Elizabeth in late 2010. During a call at Sydney, QV was illuminated in pink in support of Breast Cancer Research.[24]

January 2011: Two years after the first Cunard Royal Rendezvous on the same date the RMS Queen Mary 2 met up with the Queen Victoria and the brand new MS Queen Elizabeth for another Royal Rendezvous in New York City on 13 January 2011. Both the Queen Victoria and MS Queen Elizabeth made a tandem crossing of the Atlantic for the event. All three ships met in front of the statue of Liberty at 6:45 pm for a Grucci fireworks. The Empire State Building was lit up in red to mark the event.[27]

5 June 2012: Once again all three Queens will meet again but this time in Southampton in order to celebrate the Diamond Jubilee of Queen Elizabeth II.[28] 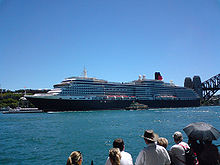 Queen Victoria travelling through a fjord in Norway

A feature which will distinguish her from her new sister, MS Queen Elizabeth, is her more angled sloping stern, as compared to the newer ship's vertical one. In addition to this she lacks the covered games deck above the bridge, a feature which is present on the newer ship.

Queen Victoria's public rooms are mainly located on the lower-level public decks of the ship, 2 Deck and 3 Deck. Unlike the Queen Mary 2, however, there is no central circulation access, the main corridors being to the port side.

1 Deck, the lowest passenger deck, holds the lowest level of a three-storey stairwell lobby, as well as of the Royal Court Theatre. On 2 Deck can be found the mid-level of the Royal Court Theatre, casino, Golden Lion Pub, Queen's Room, Todd English à la carte restaurant, Chart Room bar, and lower level of both the library and Britannia Restaurant. The topmost level of the theatre, Royal Arcade, Midships Lounge, and upper level of the library and formal dining room are all on 3 Deck, along with a wrap-around exterior promenade. The decks above these contain mostly passenger cabins until 9 Deck, on which is the Cunard Health Club and spa, Winter Garden lounge, Lido Restaurant, and two outdoor pools. On 10 Deck is the Commodore Club, Churchill Lounge (for smokers) and Hemispheres nightclub. The Queen's Grill and Princess Grill, with their attached lounge and an open courtyard between, are on 11 Deck.

Though QV is theoretically a classless ship, it has been argued that the Queen Mary 2 and Queen Elizabeth 2, both of which follow the same practice of separating passengers into different restaurants based on the price of the cabin they booked (the Britannia as standard for regular cabins, the Princess Grill as middle for those in junior suites, and the Queen's Grill as superior for deluxe suite occupants), are actually ships divided into three classes, despite the fact that all other public rooms are used by all passengers equally. Though this situation is similar on the QE2 and QM2, it is further enhanced on the QV by the fact that Grill Passengers (those dining in the Princess Grill or Queen's Grill) also have two private outdoor areas on 10 and 11 Decks with the specific name "Grills Terrace", a feature which also appears on the QM2 at the aft section of 10 Deck.

QV's theatre is the first at sea to have private boxes. She also has a Winter Garden lounge with a retractable glass roof and a two-storey library with a connecting spiral staircase.

Queen Victoria can carry 3,000 tons of heavy fuel and 150 tons of marine gas oil, consuming 12 tons per hour for maximum output.[2] Although the ship burns heavy fuel, it uses low-sulphur fuel in certain jurisdictions. In October 2009, Queen Victoria's captain, Ian McNaught, stormed out of a press conference in Halifax, Nova Scotia when asked about the ship's environmental standards.[5]