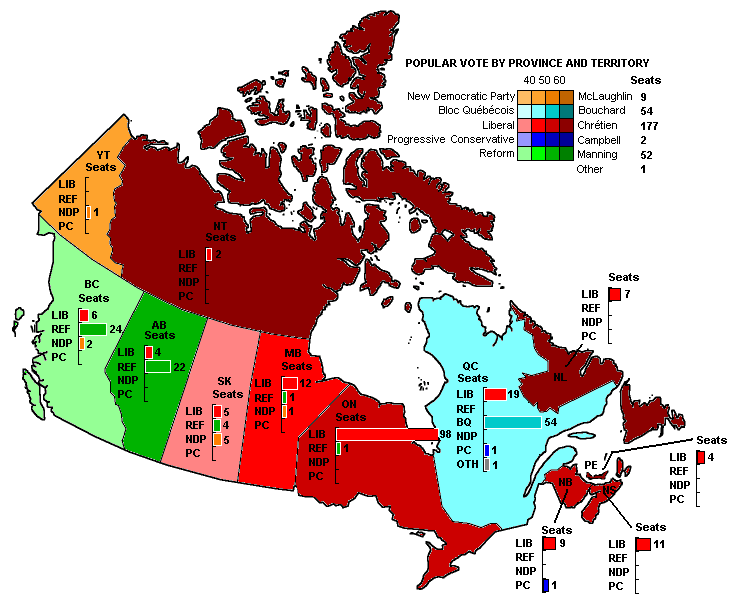 map_size = 250px
map_caption =
title = PM
before_election =
before_party = Progressive Conservative Party of Canada
after_election =
after_party = Liberal Party of CanadaThe Canadian federal election of 1993 (officially, the 35th general election) was held on October 25 of that year to elect members to the of the 35th Parliament of Canada. Fourteen parties competed for the 295 seats in the House at that time. It was one of the most eventful elections in Canada's history, with more than half of the electorate switching parties from the 1988 election. The Liberals, led by , won a strong majority in the House and formed the next government of Canada.

The election was called by the new Progressive Conservative Party leader, Prime Minister , near the end of her party's five-year mandate. When she assumed office, the party was deeply unpopular, and was further weakened by the emergence of new parties that were competing for its core supporters. Campbell's initial efforts helped the party recover somewhat in pre-election polls before the writs were issued. However, this momentum did not last, and the Conservatives suffered the most lopsided defeat for a governing party at the federal level, losing more than half their vote from 1988 and all but two of their 151 seats. Though they recovered slightly in the 1997 election, the Progressive Conservatives lost seats in 2000 and would never be a major force in Canadian politics again. In 2003, the Progressive Conservative Party disappeared entirely when it merged with the larger party to create the new .

Two new parties emerged in this election, largely from the supporters of the Progressive Conservatives. The sovereigntist won almost half the votes in Quebec and became the Official Opposition, while the Western-based Reform Party won nearly as many seats. The Bloc Québécois had been founded only three years before and was competing in its first election, while the Reform was considered a fringe movement in the 1988 election.

The traditional third party, the , collapsed to nine seats only one election after having its best performance ever. It remains the NDP's worst result in a federal election since its formation and the only election where the party polled less than one million votes.

Voter turn-out was 70.9 percent, adjusted from initial tallies of 69.6% to account for deceased electors.

The Liberal Party had dominated Canadian politics for much of the 20th century. The party had been in office for all but 22 years between 1896 and 1984. The Conservatives only formed government five times in this period.

In 1984, however, Brian Mulroney led the Progressive Conservatives to the biggest majority government in Canadian history, winning a majority of the seats in every province. The Liberals were decimated, losing 95 seats in the worst defeat for a governing party at the federal level at the time. Especially important was the Conservative breakthrough in Quebec, a province where they had been almost unelectable for much of the century. Between 1896 and 1984, the Conservatives had only managed to win the majority of seats in that province once, in the election landslide of 1958. After winning only one seat in the province (out of 75) in 1980, the Tories won 58 seats in 1984, virtually wiping out the Liberals outside of .

Mulroney's government was based on a "grand coalition" of socially conservative populists from the West, fiscal conservatives from and , and Quebec nationalists. This coalition helped him win reelection in 1988, with a considerably smaller mandate. That election was almost wholly focused on the proposed Free Trade Agreement with the United States. Over the next five years, the popularity of Mulroney and his party collapsed. The badly harmed the Canadian economy, as increased dramatically and the federal budget grew. When the Conservatives had come to office in 1984, the federal deficit was at an unprecedented $34.5 billion. Despite pledges to reduce it, the deficit had grown to over $40 billion by 1993. The federal had also grown to $500 billion. [Bliss 312.] In an attempt to restore the fiscal balance, Mulroney had brought in the highly unpopular Goods and Services Tax. [80% of Canadians disapproved of the GST in a June 1993 poll. Woolstencroft 32.]

Mulroney had also promised to change the constitutional status quo in favour of increasing provincial autonomy. This was one of the most important reasons for his party's support in Quebec. He attempted to amend the constitution twice, but both reform proposals failed. The failed when the provincial legislatures of Newfoundland and adjourned without bringing the issue to a vote. The was defeated by the Canadian people in a 1992 referendum. In the case of the Charlottetown Accord, the majority of Canada's population voted against an agreement endorsed by every First Minister and most other political groups. This stinging rebuke against the "political class" in Canada was a preview of things to come, as the upcoming election would be held on October 25, 1993, a year less a day after the Charlottetown referendum.

Mulroney out, Campbell in

These factors combined to make Mulroney the least popular leader since opinion polling began in the 1940s. [Bliss 308.] The Progressive Conservative Party's popularity reached a low of just over 15% in 1991.

Campbell enjoyed a brief period of high popularity upon being sworn in, becoming the eponym of "Campbellmania," just as had been the subject of late-1960s . [, ": Unguarded Confessions of a Prime Minister." Random House Canada, 2005, p. 363.] Campbell did extensive campaigning during the summer, touring the nation and attending barbecues and other events.

The other traditional parties were also not faring well. While and the Liberal leadership supported Meech, there was significant internal disagreement, with Trudeau returning from retirement to speak out against it. After the Liberals' disappointing showing in the 1988 election, Turner had resigned. The party had selected veteran politician over as their leader in 1990, but the leadership contest had proved to be divisive and Chrétien was unpopular, especially in his native Quebec after declaring his opposition to the Meech Lake Accord. However, as Mulroney's popularity slipped, the Liberals rapidly picked up support, and surged to a wide lead in opinion polling. Indeed, the main reason Mulroney departed from the scene was an overwhelming consensus in the polls that he would be heavily defeated by Chrétien if he led the Tories into the election.

The New Democratic Party (NDP) had won a record 43 seats in 1988, and in the following few years, their support continued to grow. At one point, the NDP led the opinion polls. This helped the NDP win a series of victories at the provincial level. In 1990, in a surprise victory, led the party to office in --the first (and as of 2008, only) time that party won government east of . That same year, the NDP won a in Quebec to take its first-ever seat in the province. The next year, under the leadership of , the New Democrats were elected in . Within a few years, however, both these provincial governments became deeply unpopular, and support for the federal NDP also began to fall. In a deviation from their traditional position as staunch federalists, the NDP chose to align itself with the Liberals and Conservatives on the "yes" side of the 1992 . That position, as well as new leader 's efforts to expand its support into Quebec instead of focusing on , hurt the NDP's standing as the traditional voice of Western protest.

The greatest difference from 1988 was the rise of two new parties. After the failure of the Meech Lake Accord, led a group of Conservative and Liberal MPs to form the Bloc Québécois. This party quickly gained the support of Quebec sovereigntists and access to the networks of the provincial . won a 1990 by-election, and throughout the period leading up to the election, the Bloc polled as the most popular party in Quebec.

The was a Western-based populist party led by , the son of former Alberta Premier . It originally campaigned under the slogan "the West wants in". Reform had nominated candidates in the 1988 election, but had failed to win any seats, and garnered only 2.5 percent of the popular vote. Many Western voters had never forgiven the Liberals for the in the 1970s, and Mulroney's attempt to pacify Quebec caused them to rethink their support for the Tories. The NDP (and its predecessor, the ) had been the traditional Western protest party for most of the last 40 years, but since the 1990s they attempted to make inroads in Quebec and joined the Conservatives and Liberals in supporting the . Reform's unabashed populism and opposition to the Accord struck a responsive chord in many NDP voters, in spite of the stark ideological differences. In early 1989, won a by-election in an -area riding to become the first Reform MP in parliament. This came as a considerable shock to the Tories, who had dominated Alberta's federal politics for a quarter-century. Also, Grey had finished a distant fourth in the general election a few months earlier.

As Conservative support collapsed over the next four years, Reform support increased and almost surpassed that of the Tories. By the fall of 1993, it was obvious that Mulroney's "grand coalition" was about to implode.

Articles on parties' candidates in this election: